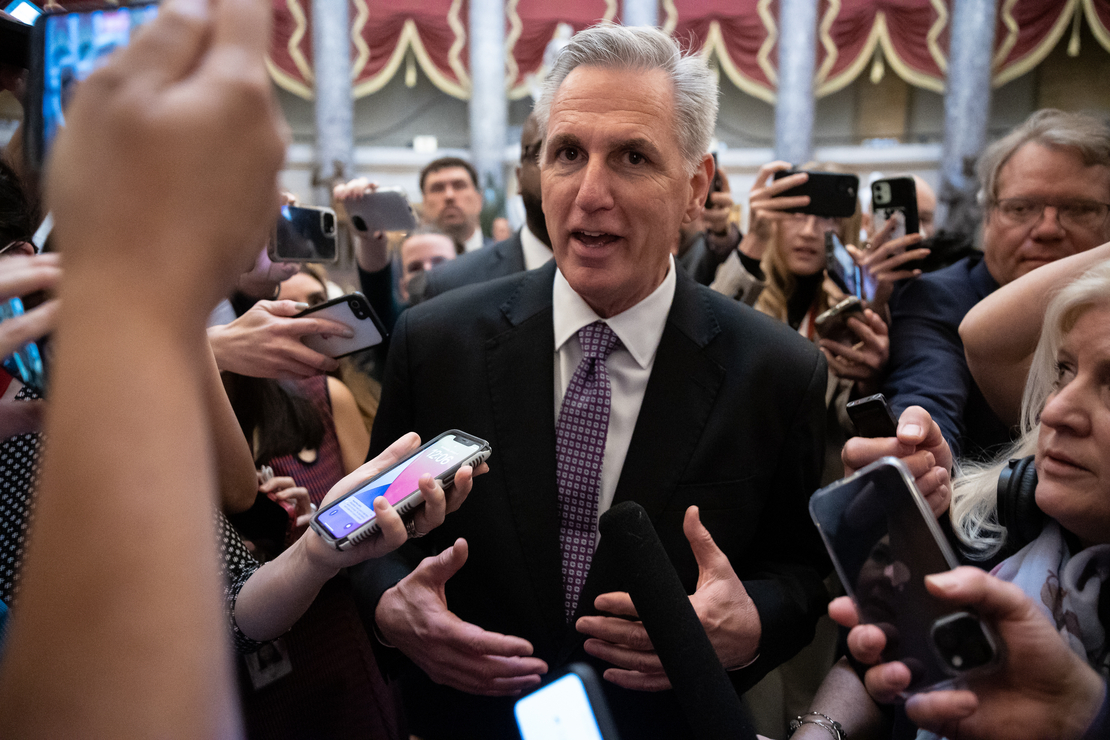 Speaker-designate Kevin McCarthy (R-Calif.) is shown speaking to reporters Wednesday in the Capitol. His troubled fight to become the next House speaker has added more uncertainty to future U.S. climate policy. Francis Chung/POLITICO

The Republican brawl over whom to elect House speaker hasn’t changed anything about climate policy — yet.

But the chaos this week has underscored concerns that the new Congress is ill-equipped to address global warming. And though the short-term impact on policy might be limited, observers expect the drawn-out fight for House speaker to exacerbate tensions between business-aligned Republicans — who are tiptoeing toward climate action — and GOP hardliners who deny climate science.

The potential consequences of that tension are twofold.

For House Republicans, it raises serious questions about their plans for the next two years. GOP lawmakers have threatened to use their newfound majority in the House to investigate President Joe Biden and his administration’s efforts to confront global warming. While those investigations are still likely to happen, the manner of execution is still very much up in the air.

More broadly, the widening Republican rift could make it even harder for U.S. policymakers to craft durable climate solutions. And that obstacle risks further sidelining the United States on climate efforts at a time when the world needs Washington to play a leading role.

“The lack of bipartisan climate unity in the U.S. hurts our effectiveness in confronting major [carbon] emitters like China,” said Paul Bledsoe, a former climate aide in the Clinton White House who also worked in the House and Senate.

“So there’s a real price to pay for this inability to govern,” he added.

Here are three climate takeaways from the Republican fight for House speaker.

1. The renegades are mostly hardliners against climate action

The group of Republican holdouts who so far have refused to support Rep. Kevin McCarthy (R-Calif.) for House speaker has long embraced climate denial as well as election denial.

Rep. Bob Good (R-Va.) specifically cited climate as a reason to oppose McCarthy, who has failed six times this week to secure enough votes from his colleagues to take the top job in the House.

“He did not whip votes against the phony infrastructure bill which focused more on climate change than roads and bridges,” Good wrote in a December Richmond Times-Dispatch op-ed, referring to the Infrastructure Investment and Jobs Act, which passed with votes from 13 House Republicans and 19 Senate Republicans.

Other ringleaders of the fight against McCarthy have taken even stronger positions against climate policy. Rep. Ralph Norman (R-S.C.) has said, incorrectly, that the clean energy industry is more polluting than fossil fuels. Rep. Andy Harris (R-Md.) has claimed there is a debate on the root cause of contemporary climate change, even though that question was settled decades ago.

Rep. Lauren Boebert (R-Colo.) has introduced bills to block protections of public lands and Biden’s reentry into the Paris climate accord — neither of which went anywhere. She has also mocked climate science.

“Climate change is absolutely real. It happens four times every year,” she said at a GOP dinner in Colorado in October.

Rep. Byron Donalds — the Florida Republican who supported McCarthy on the first two ballots before flipping against him, standing as an alternate speaker candidate himself — has ridiculed Democratic efforts to investigate Big Oil. During a 2021 hearing, he apologized to oil executives for congressional “bullying.”

“Let’s be very clear, you need an apology,” he said. “Because what I witnessed here today was just rank intimidation by the chair of this committee. Trying to get you to pledge on what you are going to spend your money on is a gross violation of the First Amendment.”

One exception on the climate front is Rep. Matt Gaetz (R-Fla.), who has spoken previously about the threat of global warming — though he has opposed a number of policies to cut carbon pollution.

“As critics of government, they are not vested in the success of government; even to the effective operation of Congress,” said Alex Flint, a former Senate staffer and executive director of the Alliance for Market Solutions.

“Some of the anti-McCarthy Republicans have said somewhat responsible things acknowledging climate change,” he said. “But once they acknowledge the problem of climate change, their hostility to governance makes them unable to support adequate policy responses. They can be useful at pointing out problems, but they don’t have solutions.”

If McCarthy can’t pull this off, there are no clear favorites for the job though there is a relatively short list of candidates now being floated. While none of the candidates has put forward a plan to meaningfully cut greenhouse gas emissions, some reject climate science outright while others have called for an expansion of clean energy to address global warming.

Under McCarthy, Republicans released a climate plan back in June, but it repeated many of the same GOP ideas, including increasing natural gas production and building out more nuclear and hydropower resources rather than reducing fossil fuel use.

If McCarthy fails to secure the speakership, House Republican Whip Steve Scalise (R-La.) may be the most viable candidate, because he has credibility with the holdout group of hard-right conservatives as well as moderates. Scalise has long rejected climate science and is a frequent critic of any effort to cut carbon emissions and reliance on fossil fuels.

Embracing climate denial puts Scalise in line with other possible speaker candidates, including Reps. Jim Jordan (R-Ohio) and Andy Biggs (R-Ariz.). New York Rep. Elise Stefanik, the third-ranking Republican in the House, once advocated for her party to do more on climate but has since embraced Trumpism and rejected meaningful climate policy.

One top contender for the post, if McCarthy fails, has stronger climate views than much of the party.

Rep. Patrick McHenry (R-N.C.) has long said climate change is a serious concern, and he has called for addressing it by building out clean energy. He has proposed bipartisan legislation to improve energy storage for utilities. Still, McHenry has been critical of ESG investing and the Securities and Exchange Commission’s proposed rule to require companies to disclose more climate-related information (Climatewire, Nov. 11, 2022).

Whoever is named speaker won’t be able to stop the growing pressure within the party to turn away from climate denial and toward the interests of young voters who want more climate action, said former GOP Rep. Bob Inglis, who formed RepublicEn and has advocated for the party to create conservative solutions to global warming.

3. The result could be chaos

January is typically a quiet month for Congress, and the passage in December of a government funding bill takes some immediate pressure off members.

But GOP hardliners are demanding Republican leadership use its legislative leverage to extract concessions from Democrats. The debt limit will be a crucial test this year, as will the appropriations bills, farm bill reauthorization and a few other must-pass items.

The House speaker fight portends how grueling those future fights might be — regardless of who runs the House, wrote analysts with the political research firm Capital Alpha Partners.

“The failure yesterday to elect a new speaker in three ballots tells us nothing that we did not already know about the likely ungovernability of the House under the current Republican majority, with its slim margin and its combustible personalities,” they wrote Wednesday.

While that might complicate efforts to coordinate opposition to Biden’s climate actions, it could also paralyze Republicans from moving toward more productive policies, Bledsoe said.

Republicans don’t have a “coherent policy that would allow the development of bipartisan compromise,” he said. “So that’s not great.”