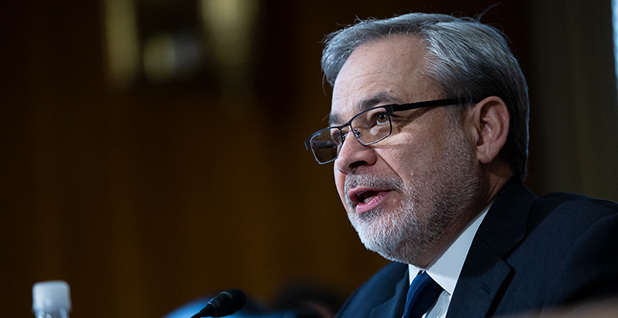 The Department of Energy yesterday confirmed three additional staffers have tested positive for COVID-19, bringing the agency’s total number of confirmed cases to six after one employee died from the virus.

Energy Secretary Dan Brouillette said in a post on the agency’s website Friday that two employees working in the agency’s headquarters in Washington have tested positive, as did a third based in Germantown, Md.

Brouillette said the employees have not been back to DOE buildings since March 13, April 1 and March 18 but did not provide specific locations in his post.

The DOE staffers are recovering while in self-quarantine, Brouillette said. The department is notifying employees who worked closely with the affected workers and deep cleaning their immediate and surrounding work areas.

Brouillette announced last week that a DOE employee in the agency’s headquarters had died of COVID-19. In a note to staff obtained by E&E News, Brouillette said the worker fell ill in the second week of March and had not returned to the department’s headquarters since then (Greenwire, April 7).

At that time, the DOE chief announced that two employees had tested positive for the virus. He said Friday that one of the previously reported confirmed employees at headquarters had been cleared.

"Your health and safety remains our number one priority, and we encourage you to continue to closely follow the guidance of both the [Centers for Disease Control and Prevention and Office of Personnel Management], maximizing telework and practicing ‘social distancing’ during this time," Brouillette wrote.

He also offered guidance for wearing cloth face coverings on property owned or leased by DOE, saying it is "strongly advised" that all employees, contractors and visitors wear face coverings when they cannot maintain 6 feet of social distance in public areas, such as security checkpoints, hallways and areas near elevators.

Individuals at security checkpoints may be asked to briefly lower their covering for identification, he said.

He noted that because wearing face masks is a public health recommendation to slow the spread of the novel coronavirus and not an occupational health requirement, personal protective equipment, such as N95 respirators or surgical masks, will not be issued.