3 issues to watch with Biden and oil prices 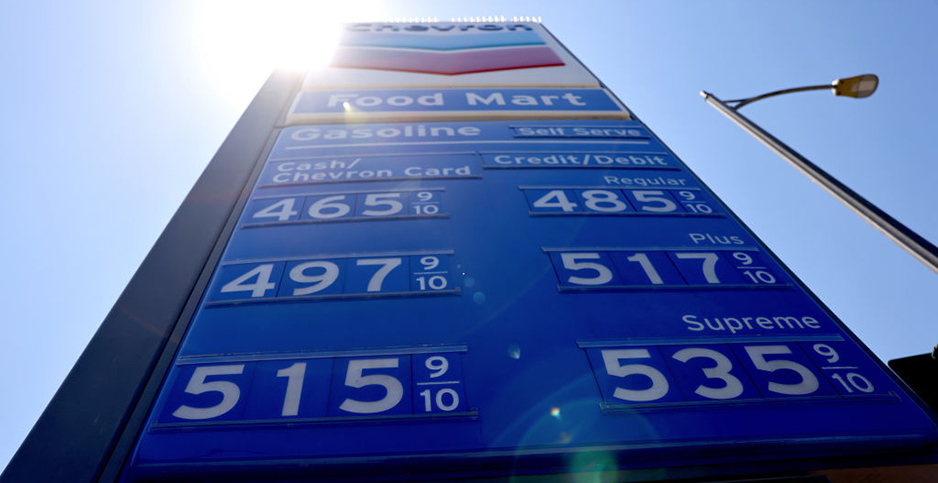 Gas prices on June 14 are shown at a Chevron station in Los Angeles. Energy experts project the average price for a gallon of gasoline nationwide will continue to rise through August. Mario Tama/Getty Images

A spike in oil and gasoline prices is touching off concerns about inflation and other long-term energy effects — and putting President Biden in a challenging political spot as he navigates between advocating for affordable pump prices and enacting climate policy.

Gas prices hit their highest point since 2014 last week, just as Americans headed into one of the busiest holiday weekends since coronavirus vaccines became widely available, for example.

The average fuel cost was more than $3 per gallon nationwide, and higher than $4 per gallon in California, according to the U.S. Energy Information Administration.

Oil prices also rose last week, then fell yesterday after talks broke down among members of the Organization of the Petroleum Exporting Countries.

OPEC had been discussing an incremental increase in production that would meet the growing worldwide demand without flooding the market. However, member nations couldn’t reach a deal and canceled a meeting that had been planned for Monday.

This year’s price spike is well short of the all-time high in 2008, when gasoline averaged more than $4 a gallon nationwide.

Still, the White House is closely monitoring the OPEC talks and is "encouraged" by the conversations, White House press secretary Jen Psaki said yesterday. Administration officials have also spoken with "relevant partners," including officials in Saudi Arabia and the United Arab Emirates, she said.

"We’re not a party to these talks, but over the weekend and into this week, we’ve had a number of high-level conversations," Psaki said.

"The president wants Americans to have access to affordable and reliable energy, including at the pump," Psaki said. "That’s why our team is constantly monitoring gas prices and directly communicating with OPEC parties to get to a deal and allow proposed production increases to move forward."

The oil and gas shift is spurring Republican attacks on Biden that some analysts said could stick if prices remain high.

Chris Jackson, a senior vice president at Ipsos Public Affairs, said gas prices alone don’t move the needle on a presidential popularity rating, but "if people start to feel like they can’t afford their lives, that’s going to hurt Biden."

Here are three key issues to watch as gas and oil prices rise:

Why are prices rising?

Oil prices tanked in 2020 as the pandemic and the recession cut into the world’s economy. OPEC, along with Russia and other producers, has been propping up oil prices since then by holding millions of barrels of oil off the market (Energywire, April 13, 2020).

Oil consumption is easing back toward its pre-pandemic levels, particularly in the United States. Oil production is rising, too, but not as fast as the demand for gasoline and diesel.

That has pushed up gasoline prices 40% since the beginning of the year, according to AAA. If the trend continues, prices could rise another 10 to 20 cents per gallon by August, according to analysts.

"We had hoped that global crude production increases would bring some relief at the pump this month, but weekend OPEC negotiations fell through with no agreement reached," AAA spokesperson Jeanette McGee said in a statement.

"There is still some dust that needs to settle to understand the sudden mini-crash that oil prices are experiencing after the day’s early gains," analysts at Rystad Energy said in a research note.

What is the role of Biden and U.S. industry?

Normally, rising prices would lead to a drilling boom in the United States, particularly among shale producers.

In the last few years, though, bankruptcies and takeovers have shrunk the number of companies in the oil patch. And investors have demanded that companies focus on producing steady profits, rather than growing their production for the sake of growth.

Those pressures have kept production from rising in the short term, said Andy Lipow, president of Lipow Oil Associates. The Biden administration has also dampened oil production with a proposal to ban new leases for drilling on federal property.

If prices stay high, though, investors and shareholders may encourage companies to start drilling again.

"They see the price of oil every day, and they wonder what the producers are doing about it in order to increase profits," Lipow said.

Historically, U.S. presidents have stayed away from negotiating directly over oil prices, although former President Trump broke with tradition and worked on last year’s OPEC deal.

If the high fuel prices touch off inflation, the Federal Reserve can help tamp down inflation by raising interest rates.

What is the political fallout?

At the White House yesterday, Psaki said Biden won’t get directly involved with the talks "at this moment," but Republicans like former Energy Secretary Dan Brouillette are pushing the administration to do more.

It’s "important that we be at those conversations," Brouillette said on CNBC yesterday.

For more than a month, the White House has been fending off Republican attempts to blame Biden for rising gas prices.

Psaki rejected a reporter’s suggestion yesterday that the situation could become a political liability for Biden and Democrats in the 2022 midterm election, asking, "In 18 months? 17 months?"

She suggested that there is often a "misunderstanding of what causes gas prices to increase" and said, "Ensuring Americans don’t bear a burden at the pump continues to be a top priority for the administration."

American consumers are acutely aware of the cost of gas — prices are plastered in large numbers at gas stations, and drivers frequently fill up their tanks at the same place, said Jackson of Ipsos Public Affairs.

"People are buying it on a regular basis, and they’re doing it mostly at the same locations, and the price is extremely visible in a way that buying, say, milk and other groceries just is not," he said. "You knew what it cost to fill your tank last week; you know what it cost this week."

While high energy prices could hurt Biden if people start feeling pressured in their daily economic lives, the reverse could also be true if prices stabilize, according to Jackson.

Gas prices were among the leading economic concerns in a recent NPR/"PBS NewsHour"/Marist survey.

"It’s not insignificant in political terms, because people see it," said Lee Miringoff, director of Marist College’s Institute for Public Opinion, which conducted the survey. "It’s concerning, and it’s something that everybody is watching right now from a political standpoint, for sure."

"As millions of Americans travel this holiday weekend, they are feeling the cost of Biden’s policies at the pump," Republican National Committee Chairwoman Ronna McDaniel tweeted ahead of the Fourth of July.

Psaki issued a statement ahead of Memorial Day weekend as prices soared after the Colonial pipeline ransomware attack, saying that Biden "knows that gas prices are a pain point for Americans."

But she argued at the time that prices were "well in line" with those in recent decades and said Americans were "paying less in real terms for gas than they have on average over the last 15 years — and they’re paying about the same as they did in May 2018 and May 2019."