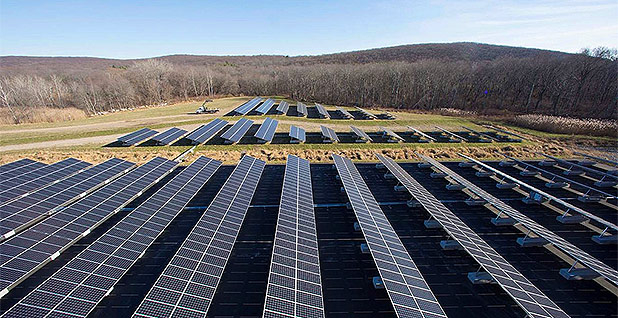 A solar installation in rural New Jersey is populated with panels from Suniva Inc. The manufacturer made a controversial proposal with the U.S. International Trade Commission that has a key hearing tomorrow. Suniva/Flickr

A high-stakes battle for the future of the solar energy industry will play out tomorrow in the Washington, D.C., hearing room of the U.S. International Trade Commission.

The ITC is considering a rare proposal to, in effect, create a trade moat around the United States, by placing steep tariffs on essential solar equipment coming from anywhere around the globe. Swirling around the ITC hearing are other contentious issues: energy, climate change, jobs, manufacturing, trade and, of course, the presidency of Donald Trump.

The commission will hear arguments on a key question: Has the domestic solar manufacturing industry been injured by years of cheap Asian imports?

The petition before the ITC dies if the four-member commission rejects the claims around Asian imports. But if it’s a tie or a "yes" vote, the decision heads to Trump’s desk in mid-November, where it will likely become a politically charged issue.

The hearing room will be crowded. Executives from a constellation of solar firms will testify, most against the tariffs and some in favor of them. State legislators from North Carolina and Minnesota will argue that tariffs will kill jobs.

And because the United States is the world’s second-largest solar market, trade officials from Canada, Europe, China and a multitude of Asian countries will be on hand to defend their access.

The solar industry will be closely watching what sort of questions the commissioners ask. Below are some of the most hot-button issues the ITC will explore.

The tariff proposal has split the solar industry along two lopsided lines.

On one side are Suniva Inc. and SolarWorld Americas, the two largest surviving U.S. manufacturers of crystalline silicon photovoltaic (CSPV) cells and modules, which are the building blocks of most solar power in use today.

The two firms are asking the ITC to recommend to the Trump administration that the United States impose steep tariffs on these building blocks — a duty of 40 cents per watt on cells and a price floor of 78 cents per watt on modules.

Dozens of U.S. solar manufacturers have gone bankrupt in the last six years amid a deluge of inexpensive supplies that have entered the United States. Twice, SolarWorld has persuaded the ITC to levy tariffs against China and Taiwan. But imports kept coming, and U.S. firms kept failing, despite the protections.

Now, SolarWorld and Suniva say that global tariffs are the only way to contain opportunistic Chinese companies that have relied on lavish government support and have shifted factories from country to country to evade U.S. trade barriers.

"The domestic industry is on the brink of complete collapse," SolarWorld wrote in a brief with the ITC. "It is no exaggeration to say that without much needed trade relief, this industry, which was pioneered and developed in the United States, is unlikely to survive."

On the other side is most of the rest of the solar supply chain, including solar farm developers, rooftop installers, producers of related materials like inverters and steel racks, electrical contractors, and manufacturers that use imported cells and modules.

The industry’s main trade group, the Solar Energy Industries Association, considers the tariffs a serious threat. Solar energy’s role on the electric grid has ballooned in the last five years, even as the manufacturing sector has withered. Tariffs, it claims, would cut solar’s growth curve in half and cause the loss of 88,000 of the industry’s 260,000 jobs.

SEIA helped round up a wide-ranging chorus of voices against the proposal, including letters sent to the ITC on Friday from a bipartisan group of 16 senators and 53 House members.

"We respectfully request that the commission carefully consider the potential negative impact that the high tariffs and minimum prices requested would have on the tens of thousands of solar workers in our states and on the hundreds of companies that employ them," said the Senate letter, which was led by Sens. Thom Tillis (R-N.C.) and Martin Heinrich (D-N.M.).

If the ITC doesn’t vote down the proposal, it goes to the president and unpredictable crosscurrents at the White House.

Trump is enthusiastic about using tariffs to protect American jobs and wants to do all he can to protect the coal industry — none of which bodes well for the solar companies that fear tariffs. With one stroke, solar and climate change advocates fear, Trump could please his base by protecting jobs and confronting China, while also making solar power less competitive versus coal.

Jobs won’t feature prominently in the prepared remarks, but they undergird the debate. Contrary to SEIA and the rest of the solar industry, SolarWorld and Suniva claim that tariffs would create 144,000 jobs (Energywire, Aug. 9).

U.S. solar companies failed. Whose fault is that?

A crucial question the commission will consider is whether SolarWorld and Suniva are in their predicament because of predatory foreigners or because of their own blunders.

SolarWorld and Suniva have ample evidence to show that imports have swamped the U.S. market. In terms of quantity, imports of CSPV cells grew almost 500 percent between 2012 and 2016, as the U.S. solar market skyrocketed in size.

In the same time frame, the U.S. solar manufacturing industry suffered $140 million in losses, according to data compiled by the ITC.

"All of this is happening in a period of exponential growth in demand," Suniva said in its brief with the ITC. "However, instead of sharing in that growth, the domestic producers’ share of the U.S. market has plummeted."

Furthermore, SolarWorld and Suniva say, China has dodged tariffs designed to prevent it from dumping solar products by moving production to other Asian countries not subject to tariffs, including Malaysia, Vietnam and Thailand.

Others claim that SolarWorld and Suniva are at fault because of their own strategic failures.

A California-based company called 8minutenergy Renewables, one of the largest utility-scale solar developers in the country, called the two companies out in a brief it filed on behalf of several large utility-scale developers.

The utility-scale market is the country’s largest, with 72 percent of market share, according to ITC figures. These projects use a larger-format solar module — one made up of 72 cells rather than the 60-cell configuration common to residential and commercial installations. Bigger modules can operate at higher voltages and shave precious cents off the final price because other components tend to be cheaper.

"Particularly due to competition from the historically low natural gas prices and decreasing cost of wind, utility scale solar developers can only succeed by keeping prices to a bare minimum," 8minutenergy’s brief said.

However, Suniva never offered a 72-cell module, and SolarWorld only started offering one last year, after most of the market had been lost to foreign competition. "Domestic producers were nearly absent, by choice, from the utility segment," the brief said.

SolarWorld and Suniva also rarely or never broke into the echelons of "Tier 1" suppliers known for their quality and reliability, which made projects using their modules harder to finance.

How American are Suniva and SolarWorld?

Suniva and SolarWorld can legitimately claim that they provide U.S. factory jobs (or did, anyway; Suniva is in bankruptcy and has shut its factories, and SolarWorld recently laid off more than half of its staff of about 600).

But that is where the simplicity ends, and opponents of the tariffs have raised questions about the loyalties of the two firms.

The parentage of Suniva is especially intriguing. Founded in 2007 by a professor at the Georgia Institute of Technology, it espoused a "Buy American" credo as it established two factories in Georgia and Michigan. However, it purchased Chinese modules until 2015 and is deeply indebted to suppliers from abroad (Energywire, May 16).

Two years ago, Suniva sold a majority stake in itself to a Chinese conglomerate, Shunfeng International Clean Energy Ltd., which is also a parent to Wuxi Suntech Power Co., one of China’s largest solar manufacturers.

The idea of a Chinese-owned Suniva inveighing against predatory Chinese companies strikes some as hypocritical. The situation grew even stranger in May, when Suniva’s new patron SQN sought to sell Suniva for a second time to Chinese buyers, expressly so SQN could get its money back (Energywire, May 22).

"Two foreign wealth funds trying to get a bailout on the backs of real American factory workers is all this is," said Hewitt Strange, director of government affairs for Cypress Creek Renewables, a solar farm developer that opposes the tariffs.

Can countries avoid the wall?

The global trade barriers that SolarWorld and Suniva seek are extraordinary. It had been 16 years since anyone asked the president to use this particular law, Section 201 of the Trade Act of 1974, to keep all countries out (Energywire, June 30).

Responses to the ITC from several countries show how easily holes could appear in a blanket tariff. Nations are seeking preferential access under existing trade agreements, including the North American Free Trade Agreement (NAFTA) and World Trade Organization (WTO) rules.

Canada and Mexico both argued in briefs to the ITC that, under the rules of NAFTA and U.S. customs law, they aren’t subject to tariffs because they are not in the top five ranking as producers.

Other countries, such as Thailand and Brazil, made the same sort of argument, noting that they don’t meet a threshold of 3 percent of imports as spelled out in the rules of the WTO. So did Singapore, which also cited the free-trade agreement it has with the United States.

Meanwhile, the European Union listed numerous ways that an unfavorable ruling could violate the rules of the WTO — an echo of the last time Section 201 was invoked, in 2001, when President George W. Bush used the statute to close U.S. markets to European steel.

The European Union filed complaints with the WTO, then retaliated with tariffs of its own that caused Bush to back down and reverse the steel tariffs a year later.

SolarWorld addressed these kinds of strategies in its own statement to the ITC. Now in its third go-round in front of the ITC seeking trade protection, its frustration was evident.

Trade laws, SolarWorld argued, didn’t foresee how easily solar manufacturing lines could be established in a new country, or how quickly different steps in the manufacturing process could be shifted from nation to nation, dodging the tariffs that it fought so hard to put in place.

"Mexican and/or Canadian producers would quickly exploit such a loophole, allowing massive quantities of third country cells to enter the United States," SolarWorld said. "Any gap in an eventual remedy will quickly be exploited by solar producers in the rest of the world."