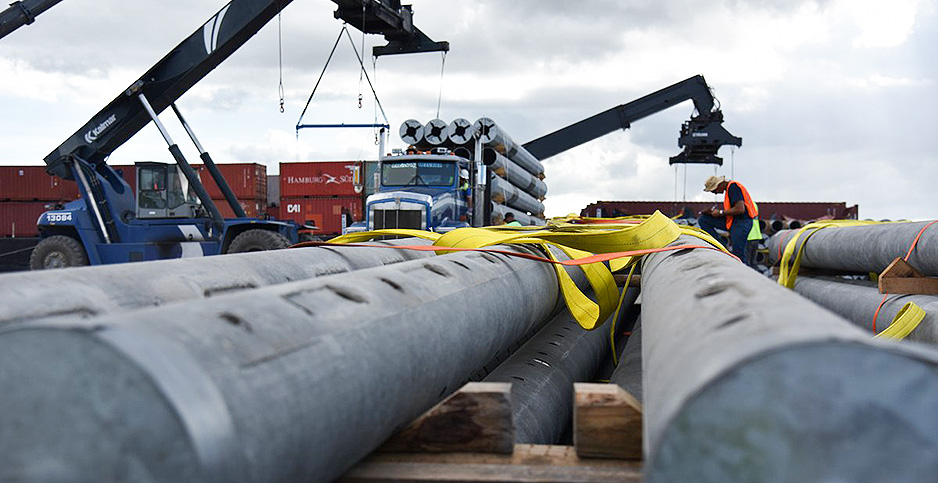 The terrific force of Hurricane Maria came and went three months ago, but Puerto Rico remains in the grips of the largest blackout in U.S. history. And it isn’t even close to over, with big questions looming and crucial equipment in short supply.

On Monday, the U.S. Army Corps of Engineers, which is leading the grid recovery, received a shipment of more than 2,600 power poles, with 5,000 more due to arrive within the week. That seems like a lot. But the island will need almost 36,000 more poles. And 2,500 miles of wire. And 6,000 transformers.

That gives a sense of the scale of the damage from the hurricane.

Things are still so chaotic that no one knows for sure how many remain without power. Many of Puerto Rico’s 3-million-plus inhabitants, citizens of the most wealthy nation on Earth, will spend Christmas and New Year’s in the dark. Officials estimate that the lights won’t come on for everyone until at least May.

Many of the questions that bedeviled the recovery early on — who exactly is in charge, who will pay and why is the recovery going so slowly — are as real today as they were months ago.

"Power is still a major, major issue," Abby Maxman, the president of Oxfam America, said yesterday as she wrapped up a tour of the capital, San Juan, and a couple of mountain towns where people are still getting their water from plastic pipes jammed into mountain waterfalls. "This isn’t where it should be, 90 days out."

Electricity has returned to many parts of San Juan; to the core of many smaller cities; and to most of the hospitals, police stations and water-treatment plants that define civilization.

Seaports and most airports have been working for months, and the hotels of Old San Juan, the core of the island’s tourist trade, can blare salsa again. The Tren Urbano, a rail line that serves the San Juan metropolitan area, started limited service yesterday for the first time since the storm struck, according to the newspaper El Nuevo Día.

The government reports that almost 93 percent of water service has been restored, 85 percent of cellphone towers are operational, and 84 percent of gas stations and 92 percent of supermarkets are open.

All of these other services are intimately connected to the electric grid, where 65 percent of the pre-hurricane electricity demand has been restored. But that number doesn’t communicate how fragile the recovery is.

As recently as Monday, the percentage of restored power stood higher, at 70 percent. But at noon yesterday, El Nuevo Día reported, a power line in the capital failed, as happens with fair regularity, and the percentage bounced down 5 points.

Many crucial buildings are functioning thanks to hundreds of generators supplied by the U.S. government, rather than reliable grid power.

Louis Berger, an infrastructure-services contractor to the Army Corps, has shipped and installed about 800 generators to power critical facilities — a fleet that may soon grow to as many as 1,000 machines, according to Tom Lewis, who is president of the company’s U.S. division. Even now, he added, delivering fuel and doing repairs are difficult because of damaged roads and sketchy phone service.

One of its largest projects is a pair of big 2-megawatt diesel generators that are plugged into the main substation on the outlying island of Culebra, creating a basic microgrid that is the sole source of power for the island’s 1,800 residents.

Nine of the territory’s 78 municipalities are without any grid power, according to a government tally. The territorial government has said its highest priority is restoring power to areas that have been without power since two hurricanes ago — since Irma, a powerful hurricane that swiped Puerto Rico in early September.

Managing the people’s expectations for electricity has been a challenge. Last month, the territorial governor, Ricardo Rosselló, promised that 95 percent of power would be restored by Dec. 15. But power officials were unable to deliver.

That may be because the island’s utility, the Puerto Rico Electric Power Authority (PREPA), keeps finding surprises, according to Army Corps spokesman Jay Field. "As part of the ongoing restoration effort, workers continue to uncover significant damage to the island’s electric infrastructure that, in many instances, requires wholesale rebuilding," he said in an email.

Lt. Gen. Todd Semonite, who is commander of the Army Corps, told Bloomberg last week that he expects Puerto Rico will reach 75 percent power recovery by the end of January, 95 percent by the end of February and 100 percent by May.

Amazingly, 90 days after the hurricane, manpower and supplies are still ramping up, along with delays and a certain amount of strife.

There are now more than 3,000 workers trying to right the grid, including PREPA’s employees and crews paid for by Army Corps contracts, according to the American Public Power Association (APPA), which is one of the groups coordinating the mainland response.

Last week, APPA announced that utilities had sent seven incident management teams, made up of seven to 10 storm recovery specialists, to the territory.

Despite the arrival of tons of equipment, far more is needed.

More than 2,000 poles were ordered from local contractors. Deliveries of poles are expected to continue into February, and all told, 326 items are on order, including critical components like bolts, fuses and insulators.

Transformers have posed a particular problem. Puerto Rico needs more than 6,000 of them, but they weren’t expected to be delivered until February. However, Field said, suppliers have expedited the air delivery of 2,600 transformers, and PREPA is providing 1,000 transformers from its warehouses.

The shortages, Field added, are because so many grids in so many parts of the country are under assault all at once.

"Due to other natural disasters in Texas, Florida and California, there is a shortage of supplies across the United States. Manufacturers are fabricating supplies as quickly as possible and, as the needed materials are fabricated, they are expedited to Puerto Rico," he wrote.

The equipment shortfall has led to a pointing of fingers on the island. On Monday, the governor, Rosselló, said, "[The Army Corps] have been put in charge of the matter of materials. They have given little visibility on this matter and when asked about when they are coming … there has been an incredible silence," according to the local newspaper, El Vocero.

The Army Corps, for its part, says that its commanders are embedded at PREPA headquarters and are in daily meetings with PREPA officials and in regular communication with a representative from the governor’s office. The Army Corps’ staff will work 12-hour shifts through the holiday, Field said.

"The [Army Corps] team will continue to encourage open dialogue with our partners and the people of Puerto Rico," he added.

It remains unclear who will pay for the long-term rebuilding of Puerto Rico’s grid, though the next few months might bring new answers as well as new urgency.

What’s clear is that the current phase of rebuilding is in the hands of the Army Corps, which was tasked with the job by the Trump administration in September. So far, it has signed contracts for at least $381 million.

However, the Federal Emergency Management Agency, for which the Army Corps works, has agreed to foot the entire bill for grid restoration for only the first six months. Three months of that are already gone. How much Washington will be willing to pay for afterward is unclear.

Furthermore, it is widely acknowledged that the Army Corps work, in essence, is a multi-hundred-million-dollar Band-Aid, because the Army Corps is rebuilding the grid as it stood before the storm. Hurricane Maria proved that grid is not equal to the task, especially as climate change makes powerful hurricanes more likely.

This week, the House of Representatives proposed the largest disaster aid package in American history — $81 billion — to fund recovery from the epic hurricanes and wildfires of 2017 (Climatewire, Dec. 19). That is, however, unlikely to satisfy the need in Puerto Rico, where the governor has asked the U.S. government for $94 billion.

The mainland electricity industry came out with a hurricane-hardened proposal last week and attached a price tag to it: $17 billion (Energywire, Dec. 12).

It would involve reinforcing substations and power lines; adding lots of solar power; and building more than 150 microgrids to keep hospitals, police stations and water infrastructure humming even if the larger grid is knocked out.

But Puerto Rico won’t come up with $17 billion on its own. The most catastrophic hurricane in modern history coincided with one of the largest municipal bankruptcies in history, and the island is $70 billion in debt. PREPA’s share of that debt is $9 billion. According to a territorial government audit made public this week, PREPA has $545 million in cash — money that it needs for urgent repairs, even as creditors seek to grab it.

One solution that almost everyone agrees on is that private investment is needed. However, one huge hurdle stands in the way: PREPA is a monopoly.

Any investment must come through it, but because of its bankruptcy and a long record of mismanagement, investors are wary. Besides, PREPA has fiercely resisted privatizing the energy sector, and the loss of influence and public-sector jobs that would likely follow.

"There’s so much unknown about PREPA and the future of PREPA. Is PREPA going to be privatized?" asked Alex Borschow, who manages an Puerto Rico investment fund and is part of an influential family on the island. "Until that is kind of cleared up, it’s challenging for any private capital to have confidence in investing in any project in the energy sector."

One is the Puerto Rico Energy Commission, which has asserted its legal authority over PREPA and is eager to bring in private investors. Its interim president, José Román Morales, told E&E News that new rules to establish microgrids might come by January. Microgrids, as a relatively new and untested technology, are likely to be sourced from private industry (Energywire, Dec. 8).

However, the commission, in existence since only 2014, has a potentially powerful opponent in the form of Rosselló, the governor.

Rosselló, while supportive of private investment in principle, has remained a staunch ally of PREPA as it has weathered its own hurricane of criticism in the wake of Maria. The governor appoints PREPA’s officials, and for decades governors have used that power to award plum jobs to allies.

The other possible change agent is the federal oversight board created to manage Puerto Rico’s bankruptcy. Known by the name of the federal law that created it — the Puerto Rico Oversight, Management and Economic Stability Act — PROMESA has broad powers over the territorial government, including PREPA.

The PROMESA board wanted to put its "chief transformation officer" at the helm of PREPA and invite a new era of clean energy and private equity. But that was frustrated last month when the judge who oversees the Puerto Rico debt crisis, Laura Taylor Swain of the U.S. District Court for the Southern District of New York, denied the PROMESA board’s request and instead gave it and the governor co-equal power over PREPA. It now appears that PROMESA and the territorial government are in a stalemate.

"Eventually," he added, "the judge will have to choose."

The board’s next point of leverage will come next week, when PREPA submits to PROMESA a draft plan for climbing out of debt. At that point, the board could exert its authority to break up PREPA, though it would likely face a legal challenge from the governor. PREPA’s final fiscal plan is due on Feb. 2.

In the meantime, for many on the island, three months of blackout is starting to feel like forever.

"Some people on the island really believe that they’ll never get power," said Maxman, the head of Oxfam America. "There’s a lack of trust, a lack of confidence, about what will be provided."