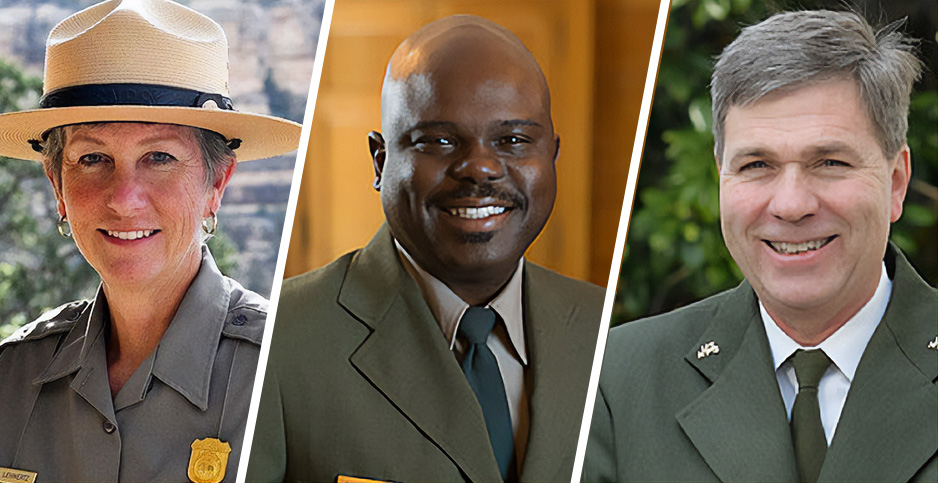 With a new occupant in the White House, the National Park Service may get something it never had under President Trump: a permanent director.

Sources say at least three candidates are now on the short list to lead the agency: Cassius Cash, the superintendent of Great Smoky Mountains National Park in Tennessee and North Carolina and a 10-year agency veteran; Christine Lehnertz, president and CEO of the Golden Gate National Parks Conservancy in San Francisco and the former superintendent of Grand Canyon National Park in Arizona; and Mike Reynolds, director of the Interior Department’s Lower Colorado Basin, Upper Colorado Basin and Arkansas-Rio Grande-Texas-Gulf regions.

Before resigning from NPS last year, Lehnertz had been considered a rising star at the agency, an openly gay superintendent and the first woman to lead Grand Canyon (Greenwire, March 14, 2019).

Cash, who is Black, has made his mark by leading the most-visited park in the nation and for his years of work promoting diversity issues (Greenwire, Oct. 9)

Reynolds, who has 35 years of experience with the agency, served briefly as the park service’s acting chief in 2017 and then led Yosemite National Park in California before taking his current position late last year (E&E News PM, Oct. 23, 2019).

The Trump administration will be remembered as the first in history to go without a permanent director since Congress created the park service in 1916.

Trump relied on four acting chiefs to run the agency, with Jonathan Jarvis — who served eight years under President Obama — being the last director to have been confirmed by the Senate, in 2009.

One of the first casualties of Trump’s loss will be Margaret Everson, who just took over as acting head of NPS in August. Her appointment angered critics who argued that she was unqualified for the job, since she had never even worked for the agency (Greenwire, Aug. 7).

But a decision to permanently fill the position could be months away. Biden must first pick an Interior secretary, who is then likely to have a big say in who ultimately gets the job. Jarvis, the 18th NPS director, was not confirmed until September 2009, eight months after Obama took office. Obama waited until July 2009 to nominate him.

"President-elect Biden will, I assume, select a strong secretary of Interior that cares about natural resources — the current one does not — and then select what I would hope to be a career professional to be the director of the National Park Service," Jarvis said this morning in an interview. "And what I would hope the president-elect would do first and foremost in this new role is to restore the respect of the career professionals. They’ve been denigrated, mistreated and harassed for four years."

Regardless of who gets the top job at NPS, hopes run high that Biden will change the trajectory for the agency and return more decisionmaking power to local park superintendents.

"The last four years have been brutal for our national parks and public lands," said Theresa Pierno, president and CEO of the advocacy group National Parks Conservation Association.

She said running the agency without a permanent director created "instability and damage that could take years to reverse," with the Interior Department emphasizing development of public lands over the protection of parks.

A Harvard University study echoed that assessment last month, calling the absence of a permanent director "the largest challenge facing NPS." Among other things, the study said NPS staff had been "disempowered," while "the level of centralized decision making at NPS is unprecedented," with Interior Secretary David Bernhardt making decisions that typically would be delegated to the agency’s director (Greenwire, Oct. 21).

"The presence of acting directors has decreased accountability and steered the Service away from its core mission of preserving the parks," said the study, conducted by the Harvard Law School Environmental & Energy Law Program.

Its findings were based on 25 interviews with Jarvis and other former Interior Department career staff, former political appointees from the Clinton and Obama administrations, and natural resources and American Indian law experts, along with a review of documents and news coverage.

As an example of Bernhardt’s influence, the study cited his decision to force parks to reopen earlier this year in the middle of the COVID-19 pandemic. Opponents accused Bernhardt of risking the health of both NPS employees and park visitors.

It’s uncertain how quickly a Biden administration would move to shake up leadership at the agency, but it will happen whenever the Biden transition team puts forward a temporary replacement for Everson.

The Trump administration’s revolving leadership team began immediately, when Jarvis resigned in January 2017 and was replaced by Reynolds, then one of Jarvis’ top assistants. After Reynolds was reassigned to Yosemite, P. Daniel Smith took over until October of last year.

David Vela, who had been nominated for the director’s job but never got a vote by the full Senate, took the job when Smith left, only to be replaced by Everson 10 months later.

While Vela, Smith and Reynolds all had been longtime NPS career employees, Everson had served as the principal deputy director of the Fish and Wildlife Service and a counselor to Bernhardt.