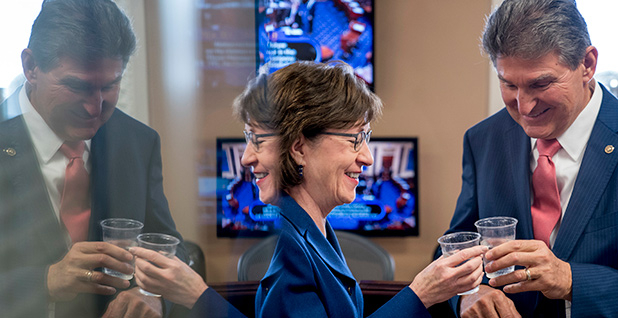 The deal lawmakers struck yesterday to end a partial government shutdown only buys them about three weeks to sort out funding for federal agencies.

And with the State of the Union address next week and legislative retreats, lawmakers have less time than it appears.

Here are three scenarios that could play out on Capitol Hill as lawmakers rush to come up with a spending accord by their new Feb. 8. deadline.

Democrats and Republicans in both chambers insist their goal is to come up with a budget agreement that would allow them to write their overdue annual spending bills for fiscal 2018.

Leaders "are very close; those [spending caps] could have been done weeks ago," Sen. Lamar Alexander (R-Tenn.), a senior appropriator, said yesterday when asked whether three weeks will be enough time for lawmakers to finalize funding levels.

Ideally, lawmakers would like a budget deal for both fiscal 2018 and 2019, giving them a head start on writing fiscal 2019 bills as the highly partisan fall elections loom.

The House and Senate have not yet settled on what the overall discretionary spending levels will be for fiscal 2018.

The parties have been split over how to dole out just over $1 trillion in discretionary spending between national-security-related agencies and domestic ones.

The GOP wants a boost of a few hundred billion dollars for the military, while Democrats say they’ll only go along if more spending is also provided for the rest of government.

Alexander said that if lawmakers can settle on a top line by Feb. 8, they could within three to four weeks assemble the 12 annual appropriations bills into a final omnibus, which could contain policy riders.

Several lawmakers also said a budget agreement could include a disaster aid package for Texas, Florida, California and several U.S. territories ravaged by hurricanes and wildfires last year. The Senate has yet to act on an $81 billion emergency spending deal the House passed in December.

Democrats said they are also pressing for federal help for ailing union pensions, including coal miners’ retirement programs that have been on the brink of insolvency in recent years.

If lawmakers cannot reach a final deal, they could once again punt on a final budget deal with another stopgap.

Another CR would avoid a shutdown but — without the promise of new spending — would continue handcuffing agencies at fiscal 2017 levels with little flexibility for starting new initiatives. It would also hamstring lawmakers as they seek to begin work on fiscal 2019.

"We are four months into the current fiscal year with no floor votes on any appropriations bills. That’s the big crisis that we haven’t addressed yet, and we are going to have to in a bipartisan way," said Sen. Chris Coons (D-Del.), an appropriator.

Sen. Angus King (I-Maine) noted that over the last 20 years Congress has passed more than five CRs annually before settling on spending. He added: "That’s ridiculous. It’s like a slow-motion shutdown in its effect on the government."

Various congressional factions could become aggressive in seeking add-ons to a CR to secure their support.

Defense hawks and some conservatives, for example, have already suggested that, absent a broader budget deal, the next stopgap will need to contain some increased spending for the Pentagon to get their support.

The House next week is set to vote again on defense spending legislation. Leaders promised conservatives such a vote in exchange for supporting the CR.

Another monthlong CR would push the funding debate into March, when Congress will also have to raise the nation’s debt ceiling to avoid an unprecedented federal default.

That move would only add to the drama surrounding what are expected to be high-stakes negotiations over how to raise the borrowing limit.

Even if there is a spending accord by Feb. 8, Congress may still need to pass a short-term CR to give members time to fill in the details.

Lawmakers are not eager to entertain the chance of another shutdown next month. Still, the prospect is always possible, especially if Democrats don’t get what they want on key priorities.

Signs of the rancor that led to the shutdown over the weekend remained evident yesterday and could make upcoming budget talks difficult.

"This shutdown was an embarrassment. It didn’t need to happen. It should have never happened. Senate Democrats shut it down," House Majority Leader Kevin McCarthy (R-Calif.) said on the floor as he repeatedly talked about the need for fully funding the military.

Pelosi, like most House Democrats, voted against the CR last evening. It passed mainly with GOP votes.

"While today’s vote ends the Trump shutdown, it does not diminish our leverage," Pelosi said.

Pelosi told reporters there had been no new budget talks in recent days between parties and the White House. And she again noted President Trump has touted "good government shutdowns."

Trump, too, hardly sounded a conciliatory tone as Congress reopened the government. "I am pleased that Democrats in Congress have come to their senses," he said.