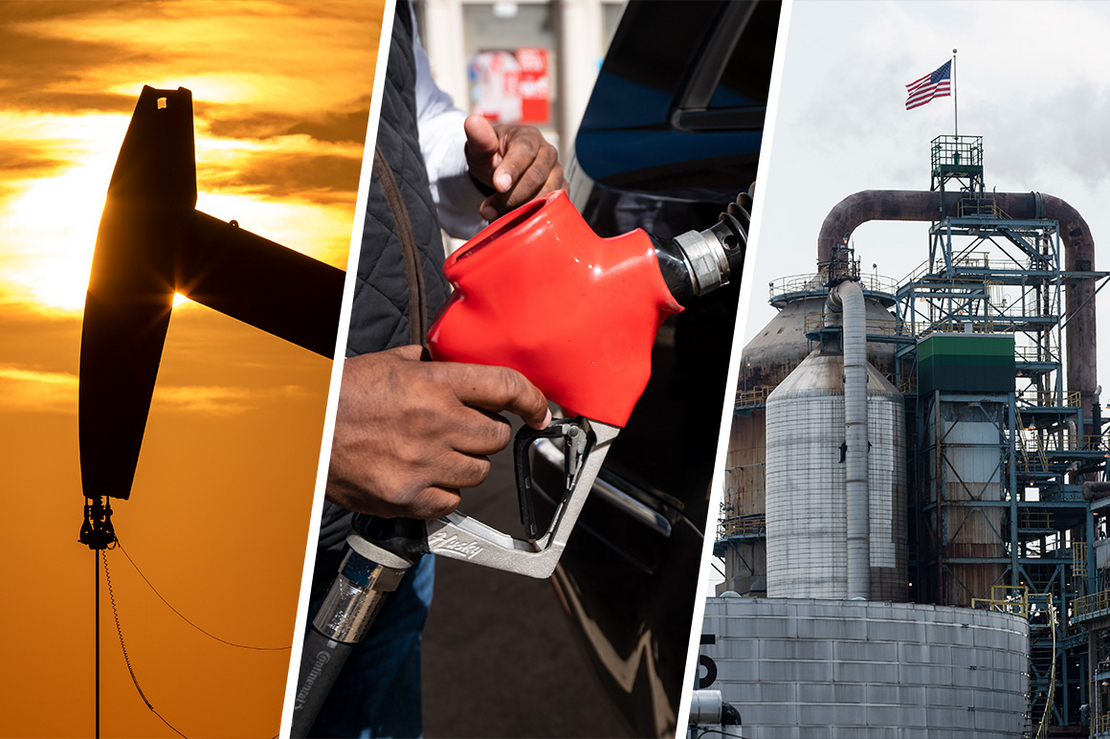 President Biden’s ban on Russian oil imports has raised questions about the use of the European country’s crude in U.S. refineries, as well as the direction of soaring pump prices and the White House’s role in influencing oil markets.

More than a week after Russian troops invaded Ukraine, the White House announced the ban as the latest salvo to cripple the Russian economy and convince President Vladimir Putin to end the invasion. To fill the gap — and help ease the cost to American consumers — Biden has urged U.S. oil companies to produce more oil and gas.

But that may be a difficult ask, experts say.

Russian crude fills a unique niche in the U.S. market, as the equipment in some refineries is designed to handle certain types of oil imported from the country. Meanwhile, the U.S. oil industry is facing investor pressure to return revenues to shareholders rather than drill, and labor shortages have slowed expansion. Experts also differ on how much the Russian oil ban will matter for oil and gas markets globally, which ultimately drive the cost of gasoline and diesel in the U.S.

Right now, the price of oil is high, with the U.S. benchmark price of crude hitting $130 earlier this week. Average pump prices have risen by 75 cents a gallon in the U.S. since Russia began amassing troops at the Ukrainian border earlier this year.

Analysts at Rystad Energy have pondered a worst-case scenario for rising prices, where sanctions on Russian oil spread beyond the U.S. That could drive the price of oil to an unheard-of $240 per barrel by this summer, the firm said yesterday in a statement.

That’s “fortunately not the most likely scenario,” said Bjørnar Tonhaugen, Rystad’s head of oil markets. But he warned policymakers, analysts, industry and traders that sustained high prices are expected.

“This is the largest energy crisis in decades, and the impact on the world’s most important commodity is going to be unprecedented,” Tonhaugen said.

As the world contemplates a new era of uncertainty for oil and gas markets, here are three key questions shaping the debate:

Why import from Russia at all?

The oil ban on Russian crude came after a build-up in pressure to punish the Kremlin — but also grumbling from U.S. political leaders like Sen. Joe Manchin (D-W.Va.) that the U.S., the world’s largest oil producer, even needs Russian energy at all.

“It’s basically foolish for us to keep buying products and giving profit and giving money to Putin,” Manchin said on “Meet the Press” last week. “We have the energy, we have the resources here.”

Russia is the world’s third-biggest oil producer and has been the No. 3 source of oil to the United States. It exports roughly the same amount to this country as Mexico and far less than Canada, which in 2020 accounted for 52 percent of U.S. imports.

About 1 percent of Russia’s annual oil production is sent to the United States, according to the U.S. Energy Information Administration.

Companies in the U.S. have imported Russian oil into the United States because some of the grades of oil Russia provides work well with what American refineries are able to refine. For example, after the U.S. imposed sanctions on Venezuela’s oil industry in 2019, imports of “unfinished heavy oils” from Russia helped replace heavy sour crude from Venezuela that many Gulf Coast refineries are set up to handle.

Now those refineries will need to find another source of supply. That is viewed as a primary reason why the Biden administration has reportedly begun negotiating about sanctions with Venezuela to let its oil start flowing back into the global market.

Last year, the U.S. imported an average of 209,000 barrels per day (bpd) of crude oil and nearly 500,000 bpd of other petroleum products from Russia. According to the American Fuel & Petrochemical Manufacturers, a trade group, most of those other petroleum products are “unfinished oils” that are processed into gasoline, diesel and jet fuel, as well as gasoline blend stocks and petroleum diesel.

Russia also provides “light sweet” crude oil to West Coast refineries. Last year, Russian imports to the Gulf Coast increased to replace a loss of supply from the Gulf of Mexico because of Hurricane Ida, and to the West Coast because of problems Nigeria faced in restoring production to pre-pandemic levels.

Where are prices going?

The price of gasoline is likely headed up, but how far depends on oil production trends in the U.S. and abroad, as well as the outcome of ongoing sanctions.

After prices climbed following the Ukraine invasion, a hopped-up Wall Street relaxed in part as Fatih Birol, executive director of the International Energy Agency, said the organization could release more oil from inventories, according to a Reuters report. The IEA will also come up with an action plan to cut oil usage, Birol said.

Even more so, fears were eased by the United Arab Emirates ambassador to the United States, Yousef Al Otaiba, announcing the UAE would push the Organization of the Petroleum Exporting Countries cartel to increase production.

It was a welcome tumble for downstream consumers.

The average national price was $4.25 for a gallon of regular gasoline, AAA said yesterday. While it could continue to rise, the oil news has dampened that trajectory, said Andy Lipow, president of Lipow Oil Associates. Lipow said he’d revised his outlook for national average gasoline prices down from $4.50 to $4.35 on the news.

Others have also signaled that market panic about crude may be abating.

“That $130 price point was factoring in the absolute siege mentality in the oil market, where we were staring down potentially losing all Russian output, OPEC not budging and the Ukraine situation just worsening,” John Kilduff of Again Capital said yesterday on CNBC’s “The Exchange.”

He added: “Now we’ve reversed all of that, seemingly, to a degree at least. I don’t want to get ahead of myself.”

However, oil rose this morning after UAE seemed to backtrack on calling for OPEC to boost output.”The UAE is committed to the OPEC+ agreement and its existing monthly production adjustment mechanism,” Al Otaiba said in a tweet.

Morgan Bazilian, professor of public policy at the Colorado Institute of Mines, said the Russian oil ban had largely been priced in and would have a “muted” impact on American consumers. But he warned that price volatility remains a threat.

“The U.S. action alone is not the full story,” he said. “The oil market is global and deeply interconnected. Actions by others will matter more.”

The European Union did not join the U.S. in its decision to quit Russian oil and gas, and the White House said yesterday it had not insisted that allies with a greater need for Russian products take that path. But further price shocks could arise if broader sanctions from other countries follow in coming weeks and months.

“The U.S.’ ban on Russian energy imports is largely seen as symbolic given their limited dependence compared to Europe, but nevertheless shows that energy sanctions remain on the table and could be deployed if the war escalates further,” Sindre Knutsson, vice president of natural gas markets for Rystad Energy, said in a client note.

Can Biden do anything to cut prices?

In the short term, the president’s actions may play a role in the daily swing of crude prices. But the White House’s ability to influence oil markets is minor compared with fundamentals of supply and demand, experts said.

Even before the Russian invasion of Ukraine, the world was looking at a tight market. OPEC was trying to raise production gradually, but some countries couldn’t even make their quotas, said Tai Liu, an analyst in U.S. oil research at BloombergNEF.

Meanwhile, the demand for oil and petroleum products was returning much faster than anticipated post-pandemic, he said.

“You have a supply picture that’s looking really tenuous, and then you have really strong demand gain,” he said. “Now with the invasion, everything is looking a lot worse.”

The energy ban from the U.S., mirrored by a phase-down in Russian imports in the U.K., could exacerbate that picture, he said, noting that it would depend on how slowly the countries unwind their ties to Russian energy. Liu said he could not comment directly on price dynamics.

“The issue that we see is that there aren’t any short-term fixes, and the market expects a lot from the U.S. production, which is facing some bottlenecks, from labor to sand to equipment,” he said.

While those issues could be resolved over time, there is no “panacea” response, he said.

Valle said the administration could make some controversial changes to help industry, such as lifting Jones Act restrictions.

A provision of the Merchant Marine Act of 1920 meant to protect U.S. shippers, the Jones Act requires that products being moved between U.S. ports be on U.S.-flagged and -manned ships. Critics say its limits force a reliance on foreign crude in places like Hawaii — which imports from Russia.

The administration could also ease regulatory requirements to help during the supply chain pressure, he said.

“Wells have to be drilled; they have to be completed. They have to be connected to pipelines, and we have to have all the equipment,” Valle said. “I think using some of the regulatory burden would help so that the producers can feel confident that raising production will be beneficial.”

But beyond bottlenecks, a fundamental shift has occurred in the U.S. oil industry in recent years that could bode ill for Biden’s hopes of more drilling.

The oil patch urge to drill feverishly when prices rise has been replaced by spending discipline. Shareholders want returns, dividends and buybacks, and have little patience with oil companies making rash financial decisions that will increase debt, said Liu with BloombergNEF.

If there is a push to increase production because of these global political shifts, companies would have to get shareholders and investors on board, experts said.

“Our shareholders need to understand that nobody knows where the price of oil’s going to go, how long it’s going to be there,” Sheffield said in an interview this week at CERAWeek by S&P Global, an annual energy conference in Houston.

“If we see continued bombardment and … killing of civilians in Ukraine, the mindset may change over time.”

While Biden is limited in his ability to support rapid production growth in the U.S., he could still pay a political cost if prices escalate, with voters recalling the decision to stop Russian oil.

“The political fallout from a very large price rise on gasoline that is sustained in the U.S. could be enormous,” Bazilian of the Colorado Institute of Mines said. “The same politicians and voters that are ‘supporting’ it now will come back and hammer Biden if U.S. gasoline prices rise further as a result.”

Lipow said the Biden administration and Congress could address price pressure on consumers directly by lifting the 18 cents excise tax per gallon of gasoline and 24 cents per gallon of diesel.

That was the call from six Democratic governors earlier this week, who urged congressional leaders to lift gasoline taxes temporarily.

“At a time when people are directly impacted by rising prices on everyday goods, a federal gas tax holiday is a tool in the toolbox to reduce costs for Americans, and we urge you to give every consideration to this proposed legislation,” wrote New Mexico Gov. Michelle Lujan Grisham in a letter, along with Govs. Gretchen Whitmer of Michigan, Jared Polis of Colorado, Tom Wolf of Pennsylvania, Tony Evers of Wisconsin and Tim Walz of Minnesota.