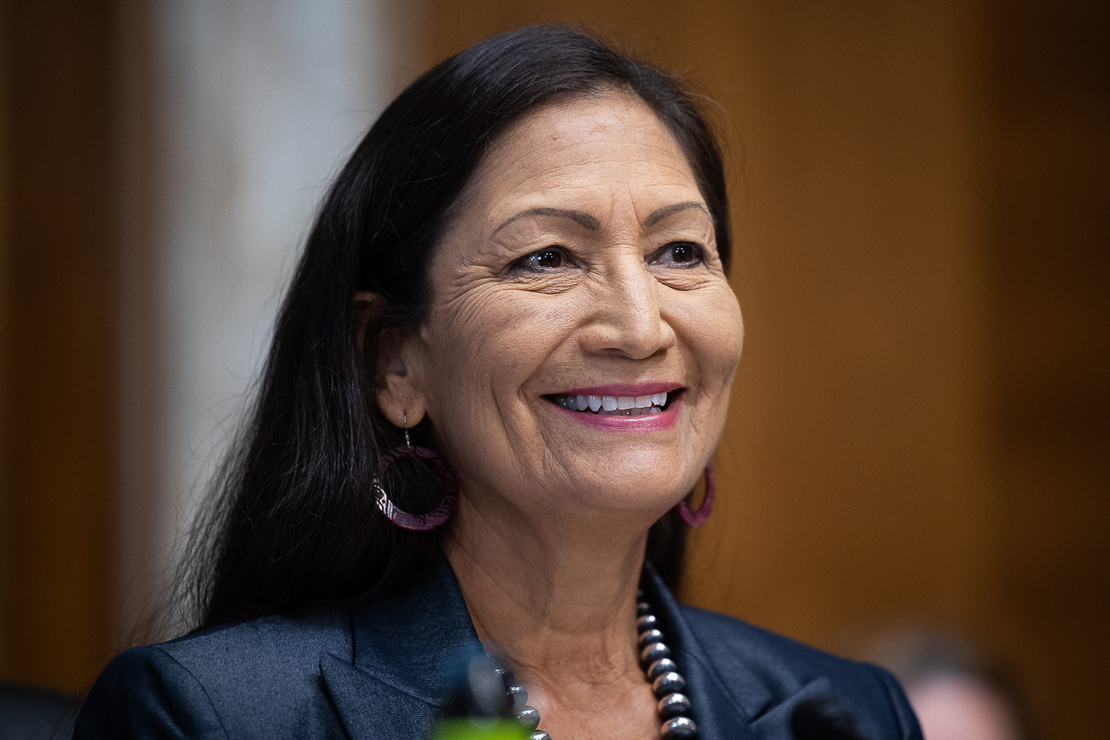 In her appearance before a Senate committee yesterday, Interior Secretary Deb Haaland defended the Biden administration’s beleaguered pick to lead the Bureau of Land Management, said that a report on an oil and gas drilling moratorium would be released “soon” and was vague about the administration’s conservation blueprint.

Her appearance was a notable one: It was her first time before the Energy and Natural Resources Committee since her testimony as a nominee. At that two-day hearing she was labeled by Republicans variously as a “radical” and “extremist.”

Haaland encountered none of that language yesterday as part of a hearing to defend the agency’s fiscal 2022 budget request, though Senate Republicans were frustrated by her evasive answers as they questioned her on the administration’s policies.

Here are the takeaways:

Hours before Republicans unanimously voted against allowing Tracy Stone-Manning’s nomination to advance to the Senate floor, GOP members of the Senate Energy and Natural Resources Committee sought to corner Haaland into speaking about Biden’s nominee to run BLM. They managed to elicit a tepid endorsement.

Stone-Manning, the current senior adviser for conservation policy at the National Wildlife Federation, was unfavorably reported out of the ENR Committee last Thursday in a tie vote.

She is strongly opposed by Republicans for her involvement in a plot over three decades ago to insert metal objects into trees to prevent a logging sale in Idaho’s Clearwater National Forest.

This episode has been a matter of public record in Montana politics, where she served as the former director of the state Department to Environmental Quality, and her allies have pointed to the fact that Stone-Manning ultimately testified in federal court against the two perpetrators of the tree-spiking expedition (Greenwire, July 19).

But new details have come to light in recent weeks that suggest to Republican critics that Stone-Manning impeded the federal investigation by not coming forward sooner and misled the Energy and Natural Resources Committee about whether she had ever been a target of a criminal investigation (Greenwire, July 15).

Sen. John Barrasso of Wyoming, the top Republican on the committee, asked Haaland whether “individuals who plan or otherwise are involved in tree-spiking incidents and threaten physical safety of federal officials … expect to be hired by the Department of Interior.”

Haaland replied that if Barrasso was referring to Stone-Manning, “she was nominated by President Biden because he felt she could do the job and that she was qualified otherwise.”

Sen. Mike Lee (R-Utah) asked Haaland if she had been aware of Stone-Manning’s backstory at the time of her nomination — Haaland said she had not — and if she had advised her on how to respond to the allegations during the confirmation process.

“I have not met or spoken with Ms. Stone-Manning,” Haaland said. “I understand that this is the president’s nominee and that she is qualified to do the job that he has asked her to do.”

Haaland later said, “I didn’t nominate her — I am here to move the department forward on the president’s priorities, and that is what I’m focused on at the moment.”

Lee and Barrasso also asked Haaland if she agreed with some of Stone-Manning’s incendiary statements from her years as a graduate student, including arguing for population control and calling children “environmental hazards” and citing livestock grazing on public lands as “destroying the West.”

“I haven’t heard these statements,” Haaland replied. “I believe there are lot of things that are destroying the West, like drought and wildlife and climate change.”

2. Oil and gas report will be released ‘soon’

More than a month ago, Haaland told members of the House Natural Resources Committee to expect the release of an interim report on the federal oil and gas program by “early summer.”

Now, just days before the last full month of the season, Haaland is saying this hotly anticipated first look at potential oil and gas reforms will be unveiled “soon.” The report, she also said, would be released at the discretion of the president, who is currently reviewing it. The department reportedly turned its suggestions over to the White House weeks ago.

Senate Republicans grew increasingly frustrated throughout the hearing by Haaland’s refusal to provide details on the contents, or timeline for publication, of the report, which could illuminate how the Biden administration plans to manage oil and gas drilling on public lands and waters.

Biden froze the sale of new oil and gas leases within hours of being sworn into office, pending a climate review of the program.

When a federal judge last month blocked the administration from continuing the leasing moratorium while its legality is being fought in the courts, critics of the pause expected the White House to restart lease auctions immediately.

“It is past time for the administration to comply with the law and hold new lease sales,” Barrasso said yesterday, adding, “The Biden administration seems intent on destroying the livelihoods of oil, natural gas and coal workers in the West.”

Haaland said the agency was both following the law and maintaining the current pause. “I suppose the pause … is in effect,” Haaland told Sen. Cindy Hyde-Smith (R-Miss.) at one point during the hearing. “You can say that as soon as one lease sale happens, the pause is over, but what I can say is we’re complying with the court order and we are doing the work necessary to move in that direction.”

She offered few details to explain this position, however, and declined to give hints about what the report would recommend or commit to a firmer timetable on when it will be shared with lawmakers and the public.

Sen. Lisa Murkowski (R-Alaska), one of four Senate Republicans who voted to confirm Haaland with some reluctance, expressed frustration with Haaland’s evasiveness by the time it was her turn to ask questions.

“There has been a lot of conversation this morning, or certainly a lot of questions, regarding the oil and gas review and the timing on that,” Murkowski said. “Your department has consistently said this would be released in early summer — well, we’re beyond early summer.”

Nearly three months after it unveiled its “America the Beautiful” campaign — a rebranding of the 30×30 pledge to conserve 30% of the nation’s lands and waters by 2030 — Haaland could offer no new details about the program.

Pressed by Republican lawmakers who expressed concern that the program could alternately lead to an expansion of the federal estate or mandatory programs for private landowners, Haaland emphasized that the conservation effort is focused on voluntary and locally led efforts.

“With respect to 30×30, of course, we have felt that it’s a collaborative initiative. We hope that many people — private land owners, organizations, farmers, ranchers — will all participate in that,” Haaland told Sen. Roger Marshall (R-Kan.) “And we have done much to ensure those conversations move forward.”

Rachael Taylor — Interior’s principal deputy assistant secretary for policy, management and budget, who testified alongside Haaland yesterday — added that the agency is working to improve its data about existing conservation lands, an effort led by the U.S. Geological Survey.

“The initiative itself is in development, including what methods are going to be used to measure success,” Taylor explained.

According to data maintained by USGS — known as the Protected Areas Database of the United States — currently 12% of the nation’s lands are permanently protected in a natural state, along with 23% of its oceans.

Those statistics do not include mixed-use sites like Forest Service lands that might be used in part for logging or BLM areas that include mining.

At one point during the hearing, Haaland told Sen. James Lankford (R-Okla.) that conservation lands tallied around 18%, but an Interior spokesperson later told E&E News the secretary had misspoken.

Lankford queried Haaland whether the “America the Beautiful” plan would allow states that already count more than 30% of their lands in permanent conservation to reduce that total “so they could have more private ownership in their area.”

Haaland replied: “On those specific details, senator, I can’t answer, but I get your point and the conversations will absolutely continue on this issue.”

In separate remarks at an event hosted yesterday by the Outdoor Industry Association, White House Council on Environmental Quality chief of staff Matt Lee-Ashley asserted the conservation effort is off to a “good, fast start.”

“It really is going to take all kinds of different policy efforts [and] investments in different places in different ways,” Lee-Ashley said. “We want to articulate that the need and urgency around this goal over the next decade, because that translates to action and policy change and investments that we need on the ground.”