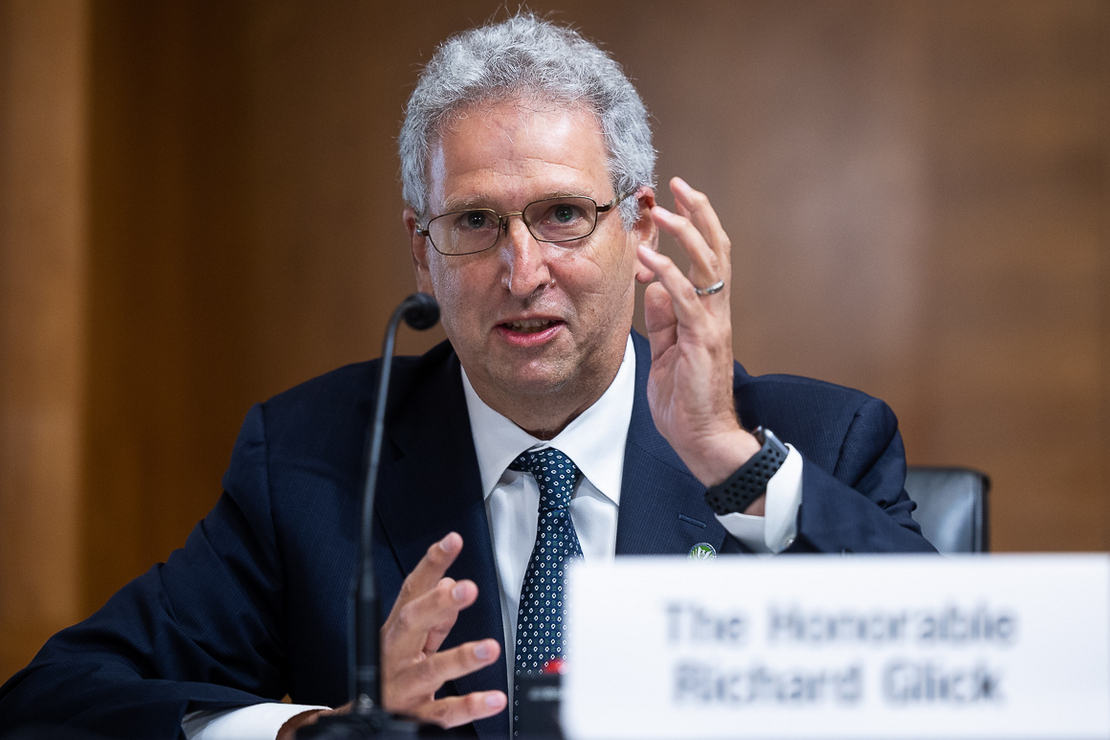 Federal Energy Regulatory Commission Chair Richard Glick defended the need for tighter scrutiny of natural gas projects yesterday during his first appearance before the Senate Energy and Natural Resources Committee since taking the helm at the agency in January.

“FERC’s regulatory actions have a significant impact on the lives of millions of people,” Glick, a Democrat, told lawmakers in his opening remarks. “As a result, it is important that our decisionmaking processes include robust input from diverse perspectives.”

“I am concerned that a number of recent commission actions have created such profound uncertainty throughout the natural gas pipeline industry that it is becoming increasingly difficult for the companies that build and operate natural gas pipelines to secure financing or rationally allocate capital,” Danly told lawmakers in his opening remarks.

Danly and his fellow Republican Commissioner Mark Christie also sounded alarm about how the Clean Electricity Performance Program under consideration in the House could affect grid reliability and electricity bills (Energywire, Sept. 28). Proponents of the plan, including President Biden, say it would create clean energy jobs and reduce the country’s greenhouse gas emissions by incentivizing utilities to add more renewable resources.

Biden has nominated Willie Phillips, Democratic chair of the Public Service Commission of the District of Columbia, to join the agency as its fifth commissioner. If confirmed by the Senate, Phillips would shift the political balance of power at FERC, which has been under Republican control or in a partisan split for the past four years.

“We hope we can get you another nominee as quickly as possible,” Sen. Joe Manchin (D-W.Va.), chair of the ENR Committee, said yesterday.

Here are three takeaways from the hearing:

Republicans on the committee grilled FERC commissioners on whether the agency is needlessly holding up energy projects.

In March, the majority of commissioners at the time agreed to start assessing the significance of natural gas projects’ greenhouse gas emissions in a major policy shift. And FERC under Glick has recently begun preparing environmental impact statements — which can take months longer to complete than environmental assessments — for a wide range of gas projects before allowing them to advance.

Glick doubled down on the commission’s legal obligation to consider all “reasonably foreseeable” environmental impacts of proposed natural gas projects.

Responding to questioning from Sen. James Lankford (R-Okla.), Glick also said the independent agency could vote on how to use the social cost of carbon. The metric is intended to measure the damage associated with emitting an additional ton of carbon dioxide into the atmosphere.

The White House Council on Environmental Quality has backed an interim value of $51 per ton, slightly higher than the cost of carbon set by former President Obama during his term.

The independent agency would not necessarily adopt the price tag used by the Biden administration, Glick said.

“We have to make our own determination,” he said.

The commission has never used the metric to reject an individual project, but EPA and environmental groups have urged the agency to use the framework. While FERC in the past has argued that it cannot measure the significance of individual pipelines and liquefied natural gas terminals’ climate-warming emissions, Glick has previously offered the social cost of carbon as one option for determining how projects may contribute to climate change.

The U.S. Court of Appeals for the District of Columbia Circuit also ordered the agency last month to redo its environmental analyses for two LNG terminals that the commission approved in 2019, Glick noted. In the ruling, the court ordered FERC to consider the social cost of carbon or explain why it couldn’t use the metric (Energywire, Aug. 4).

“We do actually have to take that into account,” he said.

In addition, Glick said he hoped the commission would finalize “within months” its review of an overarching policy statement that guides how FERC generally reviews proposed natural gas pipelines. Glick reopened the closely watched inquiry into the commission’s 1999 Certificate Policy Statement in February.

2. A ‘circuit breaker’ for energy prices?

Lawmakers pressed the commission on its response to Winter Storm Uri, which brought record cold to Texas and much of the central Plains in February. The storm has been linked to more than 200 deaths in Texas, where millions of residents faced lengthy power outages in subfreezing temperatures. The extreme weather event also brought drastic energy price increases and put pressure on natural gas supplies in the region.

Sen. Roger Marshall (R-Kan.) pointed to alleged natural gas price gouging in his home state, noting it will lead to increased bills for ratepayers for the next decade.

According to Glick, the crisis proved the need for more oversight of natural gas price spikes.

“I believe it would be helpful if Congress would give, whether it’s FERC or some other agency, some sort of circuit breaker authority when there are extreme prices, [to] impose some sort of limitation at some times,” Glick said.

Additionally, Glick renewed his call for Congress to establish authority for the commission to set stricter reliability standards for natural gas deliveries.

In Texas, Uri knocked out natural gas infrastructure that fed key gas-fired power plants. The loss of those electricity resources — many of which hadn’t been weatherized to withstand extreme cold — was one of many failures that led up to the blackouts.

Glick argued the commission has not done enough to prod gas and electricity providers to improve coordination.

“We have only approved changes that both the gas industry and the electric industry could agree with,” he said. “I think we need to bring the two sides together and kind of knock heads and suggest we really need to make changes here.”

In June, FERC unanimously issued an advance notice of proposed rulemaking exploring potential reforms to the transmission planning process. Policy barriers to building high-voltage power lines could stymie renewable energy development in swaths of the country, according to many analysts.

Meanwhile, congressional Democrats have mulled their own reforms, including the creation of a national authority to help site new interstate transmission projects.

In response to a question from Sen. John Hickenlooper (D-Colo.) about a potential “federal siting authority,” Glick said it would “have some benefits, in terms of pushing transmission forward.”

But it wouldn’t address other hurdles, like the fact that costs for new transmission projects typically fall on individual generators that want to link their projects to the grid, Glick said.

“Sometimes these upgrade costs are so expensive, it’s causing generators in the interconnection queue to drop out at the last minute,” he said.

Throughout the country, hundreds of gigawatts of new wind and solar projects are waiting to connect to the wider grid in clogged interconnection queues.

“Some are ready to go, some are not,” he said. “Queue reform includes prioritizing the ready projects against the not-so-ready projects.”

A former state utility regulator in Virginia, Christie also questioned how a national grid authority would help solve transmission bottlenecks or ease potential local opposition to new power lines. A national authority on transmission could stoke community pushback, because the decisions would be coming from faraway regulators in Washington, he said.

Commissioner Allison Clements, a Democrat who called on FERC last month to use every “tool in its toolbox” to facilitate transmission development, agreed that the commission and other agencies will still need “buy-in” from communities and other parties. At the same time, it is critical that the transmission system be improved to ensure grid reliability, she said.

Otherwise, the country could end up in a position “where lack of interconnection between regions and states is going to cost consumers a whole lot of money,” Clements said.