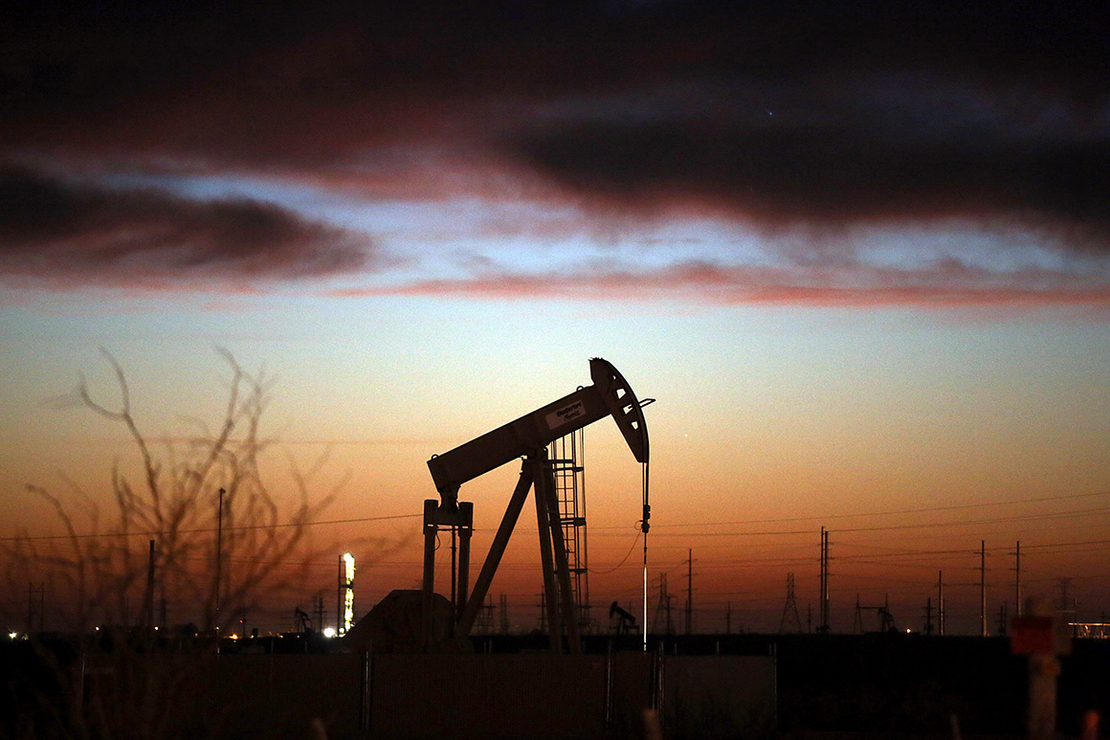 An oil pumpjack works at dawn in the Permian Basin oil field in Andrews, Texas, in January 2016. Spencer Platt/Getty Images

The Interior Department raised anxieties on all sides last night when it announced plans to resume oil and gas leasing on public lands while it appeals a court ruling that banned the Biden administration’s earlier leasing moratorium.

But Biden officials offered few details on where, or when, new leasing might occur — typically muted messaging for the administration on the fraught battle over the future of the federal oil program. That reticence has left lingering questions from oil allies, conservation groups and politicians interested in Biden’s management of the country’s stores of crude oil and natural gas.

The White House froze new oil and gas lease sales shortly after President Biden took office. That order was part of a larger plan to do a comprehensive review of the federal oil program in light of its contribution to climate change, potentially raising royalty rates to offset climate costs.

Biden officials promised an interim report on that review by early summer but failed to follow through. The delay has stoked further tension with Republican lawmakers opposed to the leasing freeze.

Interior’s announcement that it plans to fight the judge’s ban on the moratorium irked the Congressional Western Caucus, whose members accused Biden of “failing the nation” for the leasing freeze after recently asking OPEC to increase oil production to depress gasoline prices.

Oil allies weren’t the only ones who were upset.

For many environmentalists, Interior’s announcement that it would continue leasing represented a capitulation on the one firm action Biden had taken to curb federal drilling.

“With the climate crisis smacking us in the face at every turn, it’s hard to imagine a worse idea than resuming oil and gas drilling on federal lands,” said Robert Weissman, president of Public Citizen, in a statement last night.

Others focused on the White House’s decision to appeal as a sign that it was still hoping to block or limit new leasing for as long as it could. And some looked to Capitol Hill, where Democrats were already weighing potential oil reforms via a budget reconciliation process.

Jennifer Rokala, executive director of the Center for Western Priorities, said the return of leasing proved how “urgent it is for Congress to fix the broken and rigged system that governs oil and gas leasing.”

For it’s part, Interior appears to be reserving significant discretion to lease on its own terms, despite yesterday’s news.

The department stressed in its comments yesterday that it would have to deal with the oil and gas program’s “many deficiencies,” in order to move forward with new leasing.

With tensions, and confusion, around the oil program at an all-time high, here are three things we know right now:

1. New leasing? That could take a while

Interior has shied away from any specific promises or plans regarding new lease sales, which are generally held four times a year on federal lands, and at least twice offshore.

And observers say there’s a reason for that: Even if the court has forced Interior to lease again, it may not happen anytime soon.

“The defiant tone of Interior’s grudging deference to the court ruling reinforces our expectation for the Biden administration to look for other ways to pause leasing,” said Kevin Book, managing director of Clearview Energy Partners LLC.

“The devil is in the details,” he said. “I highly doubt we’ll have a resumption of leasing anywhere close to the magnitude of what we saw during either the Trump, Obama or Bush administrations.”

Instead, Interior has doubled down on its argument that the program is riddled with problems, he said.

In its statement yesterday, Interior cited numerous studies from the Government Accountability Office, the Interior Office of Inspector General and lawmakers, all of which point to risks of fraud and mismanagement of the federal program.

The “federal onshore and offshore oil and gas leasing programs are responsible for significant greenhouse gas emissions and growing climate and community impacts. … Yet the current programs fail to adequately incorporate consideration of climate impacts into leasing decisions or reflect the social costs of greenhouse gas emissions,” Interior wrote.

It also pointed toward reforms, like royalties, that are being considered.

A spokesperson for Interior declined to provide a time frame for new lease sales.

Jeremy Nichols, climate and energy program director for WildEarth Guardians, said the agency seems to be saying that it will lean on its discretionary authority under federal law around leasing decisions to address these issues before leasing resumes.

“Leasing will only happen once Interior chooses to exercise its discretion to lease and accounts for the myriad shortcomings of the onshore and offshore oil and gas leasing programs,” he said in an email.

That stance promises to rile the opposition, which has been steadfast in insisting that the White House must lease under federal law, as well as under the judicial mandate to lift the moratorium.

“The Interior statement was revealing,” said Kathleen Sgamma, president of the Western Energy Alliance, the first group to sue over the Biden leasing moratorium in January. “Apparently, Interior leadership thinks they are above the law.”

2. Interest in oil reform through the reconciliation process just got a boost

Interior officials may have hoped the Justice Department appeal of the court ruling would mollify environmentalists who want more restrictions on oil and gas drilling.

Nicole Ghio, senior fossil fuels program manager at Friends of the Earth, said that while it was “encouraging that the Biden administration is appealing this wrongful decision … the climate emergency reality we are facing demands immediate action, not acquiescence.”

Even Rep. Raúl Grijalva (D-Ariz.), typically one of Interior Secretary Deb Haaland’s fiercest defenders, conceded in a statement yesterday he was “disappointed” by the news and signaled he would be exploring ways for Congress to force the executive branch’s hand, potentially in $3.5 trillion infrastructure legislation headed to the reconciliation process.

“If new lease sales are going [to] occur, the country should be able to benefit from the reforms the administration has been studying since it rightly announced its leasing pause earlier this year,” Grijalva said. “My colleagues and I are working to raise billions of dollars for the American people and protect taxpayers, local communities and our climate from the excesses of the fossil fuel industry, and I’m looking forward to getting some wins in reconciliation along these lines.”

The House Natural Resources Committee earlier this year passed, along party lines, a number of bills designed to improve accountability from the oil and gas industry.

That included legislation from Rep. Katie Porter (D-Calif.), H.R. 1517, that would increase royalty rates for onshore oil and gas leases for the first time since the Mineral Leasing Act was passed in 1920.

Buoyed by Democrats’ desire to combat the climate crisis in reconciliation, Grijalva said he would be pushing for the inclusion of Porter’s proposal, among others.

That approach has the support of mainstream environmental groups.

“Administrative actions alone cannot solve this problem,” said Mary Greene, public lands attorney for the National Wildlife Federation. “Congress must … swiftly take action to update our hundred-year-old leasing law so that our nation can transition to the clean energy economy that we all need and deserve.”

Environmental groups like Earthjustice have also been pushing behind the scenes for lawmakers to consider oil reform during the reconciliation process, particularly with items like royalty rates that have an impact on revenues.

Still, Brian Prest, a researcher for Resources for the Future, said he wasn’t sure what beyond royalties could come from reconciliation.

“It’s hard to read the tea leaves,” he said.

Republicans largely oppose actions to rein in the oil and gas industry for fear of the chilling effect they could have on local jobs and national energy independence.

But while Democratic leaders can pass the reconciliation measure without GOP support, they do have to be mindful of members of their party from energy-producing states that may not share their party’s overwhelming hostility toward the extractive sector — and every Democratic vote will be necessary in getting reconciliation over the finish line in both chambers of Congress.

It remains to be seen whether Grijalva and others will be successful in forcing their desired overhauls in the reconciliation process — or whether these efforts will be polarizing even among their own Democratic allies.

3. The partisan fights, and political anxieties, will continue

While many of Haaland’s allies may not have taken yesterday’s appeal as a victory, her biggest critics touted it as villainous effort to destroy the oil and gas industry.

Newhouse, the Western Caucus chairman, contended that “President Biden is failing the nation, and his administration seems intent on reverting the U.S. back to the 1970s with international crises, skyrocketing inflation and groveling at the feet of foreign nations in the face of soaring gas prices.”

His statement, though, made no mention of the fact that the administration had now conceded to issuing new oil and gas leases as the appeal plays out — by all accounts a “win” for the industry and its backers for the time being.

In this way, the same political rhetoric and partisan talking points are likely to continue in the coming months, with Democrats and Republicans both unwilling to acknowledge any progress for their sides of the issue short of full capitulation from the White House.

At the same time, some of those who have been traditionally sympathetic to Haaland over the last several months are showing signs they are growing impatient.

While Interior alluded in yesterday’s statement to the forthcoming review of the federal oil and gas leasing program, Haaland’s own timetable for releasing the report has gone from “early summer” to “this summer” to “soon.”

And now, even as environmental groups are urging Congress to step in, they are also demanding that Haaland and the executive branch take more decisive action to curb extraction activities that contribute to climate change.

“Our planet can’t afford any more new fossil fuel extraction,” said Taylor McKinnon with the Center for Biological Diversity. “We’re out of time. … The administration’s forthcoming analysis, if done correctly, will show what President Biden has already promised. We need to end new federal oil and gas leasing and production to have any chance at a livable planet.”

Rokala, of the Center for Western Priorities, said that “Haaland must also use every inch of the broad discretion granted to her under America’s bedrock conservation laws to ensure any future lease sales fully account for the costs of drilling to our communities and our climate.”

The political theater over Biden’s oil and gas decisions has caused some experts to question whether it’s as fraught as it seems, particularly given the high rate of drilling approvals from this White House despite the leasing ban.

Mark Squillace, a natural resource law expert at the University of Colorado Law School, said the administration is going to increase royalty rates and fees, alongside other drilling restrictions. That will increase revenues in the near term while depressing some public oil development in the long term.

But the administration has bigger fish to fry when it comes to climate action, he said, noting that the industry is overwhelmingly located on private land and there isn’t much to be done about the large amounts of public land held by industry already.

“I don’t think that oil and gas development on public lands will be the sword that the administration is prepared to die on,” he said.