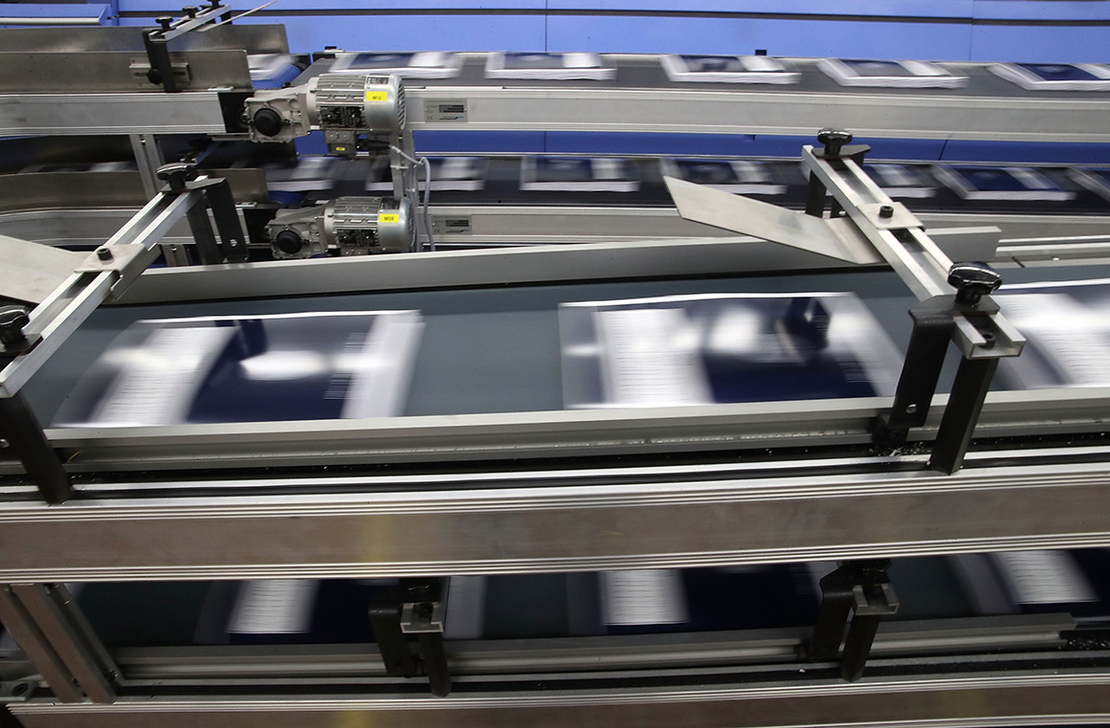 Copies of the fiscal 2018 budget at the Government Publishing Office. The White House will release the fiscal 2023 budget today. Mark Wilson/Getty Images

The White House will roll out its fiscal 2023 budget today that features a new tax on the wealthy. It is expected to recommend ways to control energy prices but will also make another push for record climate and clean energy spending.

In two fact sheets released over the weekend, the White House said that a new “Billionaire Minimum Income Tax” would require households worth over $100 million to pay taxes on at least 20 percent of their full income.

“If tax-free unrealized income allows a wealthy household to pay less than 20 percent on their full income, they will owe a top-up payment to meet the 20 percent minimum,” according to the fact sheet.

The White House said that such a tax would make the code fairer for all Americans and “make sure that the wealthiest Americans no longer pay a tax rate lower than teachers and firefighters.”

The White House estimated that such a tax would apply only to the top 0.01 percent of all Americans and that half of the revenue would come from households worth more than $1 billion.

The tax would reduce the deficit by about $360 billion over the next 10 years, according to the White House.

Democrats last year attempted to institute a billionaire’s tax as part of their $1.7 budget reconciliation bill, but the proposal was ultimately scrapped.

Hearings are scheduled in both the Senate and House this week on the president’s budget request. White House budget director Shalanda Young is expected to testify in both.

The budget request, delayed for nearly two months as Congress wrapped up fiscal 2022 spending negotiations, is expected to top last year’s $6 trillion spending request. The request comes as the administration has been consumed by the Russian invasion of Ukraine, advancing the Supreme Court nomination of Judge Ketanji Brown Jackson and the sluggish economy.

Like all administration budget proposals, Congress is sure to alter its most ambitious programs and make room for ideas not backed by the White House. Compromise will be necessary with Democrats holding thin margins in both the House and Senate.

Here are some issues to watch as the fiscal 2023 spending debate officially begins this week:

With the price of oil over $100 per barrel amid the Ukraine war and a ban on Russian energy imports, the White House is eager to propose budget steps that could help bring down high gasoline costs.

The administration and lawmakers believe the most immediate impact would come through some sort of tax rebate for consumers, but there has been no consensus yet on how it would work.

The administration could have interest in elements of a plan proposed by Senate Budget Chair Bernie Sanders (I-Vt.) late last week that would create a “windfall tax” on companies with revenues of more than $500 million on earnings that are above pre-pandemic levels.

While the issue may come up during a Budget Committee hearing this week on the president’s fiscal 2023 plan, it’s doubtful the White House would propose applying it broadly. Nonetheless, targeting oil and gas giants might have appeal if there’s a way to ensure consumers receive rebates.

Sanders said under his plan Chevron Corp. would pay an additional $12.9 billion in taxes as their profits rose from an average of $7.8 billion in the years before the pandemic to $21.6 billion last year.

“Oil companies are raking in record profits, while Americans are facing price hikes at the pump,” said Sen. Ed Markey (D-Mass.), a co-sponsor of the Sanders bill and another one, S. 3802, led by Sen. Sheldon Whitehouse (D-R.I.).

Another budget option could be proposing a federal gas tax holiday, a move that would entail suspending the roughly 18-cent-per-gallon tax on gasoline. But the White House and lawmakers have struggled with how they could keep energy companies from keeping the savings for themselves rather than passing them on to consumers (E&E Daily, Feb. 16).

President Biden’s budget proposal could also get behind further releases from the Strategic Petroleum Reserve to increase crude on the market amid the Russia boycott. The administration has already released about 62 million barrels from the reserve in the last several months and plans to release about 30 million more (Greenwire, March 1).

The budget could propose ways to increase domestic energy by forcing oil and gas companies to use existing permits for drilling on federal lands or in federal waters under tighter time frames — or risk losing them.

Senate Energy and Natural Resources ranking member John Barrasso (R-Wyo.) said yesterday on Fox News, “Things need to change. I expect a budget, though, that’s going to be more reflective of the old liberal songbook than it is of the needs of America, in terms of energy security and economic security, because those two are national security.”

Biden will likely try again to get large spending hikes for EPA and the Interior and Energy departments in fiscal 2023, after being denied them in last year’s spending deal (E&E Daily, March 10).

A compromise requiring “parity” on domestic and defense spending for fiscal 2022 forced the White House to scale back double-digit percentage increases at climate and energy agencies. EPA, for example, settled for a 3 percent increase, after earlier proposals had called for a more than 20 percent hike and hiring more than 1,000 new workers.

While it’s not yet known how big Biden might go this year on energy and climate, proposed clean energy research and programs at DOE and other agencies are likely to see a significant increase.

The White House and congressional Democrats have argued in recent weeks that an accelerated transition to clean and renewable energy would decrease the nation’s need for foreign oil, though the U.S. is still a long way from that reality amid foreign supply chain issues (E&E Daily, March 15).

Biden also could use the budget to start funding some ideas in his proposed “Build Back Better” legislation, a $1.7 billion climate and social spending package stalled in the Senate. Some programs popular with Democrats that Biden found funding for in fiscal 2022, including seed money for the Civilian Climate Corps and environmental justice grants, might get upped again.

In addition, some reports, including from Bloomberg News, have suggested the Biden administration is eyeing a 4 percent hike for the Pentagon in fiscal 2023.

While weapon systems and military operating costs consume most of the Defense budget, the $1.5 billion provided this year for environmental restoration on military bases and properties could rise, too.

Both the administration and lawmakers will try again to provide significant spending to address contamination from “forever chemicals” — per- and polyfluoroalkyl substances — which were used in firefighting foam and have polluted military facilities and surrounding areas.

With the budget release, lawmakers in both parties will begin scouring line items in search of places they can add dollars for earmarks — with the hope of delivering spending to voters ahead of the midterm elections.

Last week, congressional Democrats announced earmarks would account for no more than 1 percent of overall discretionary spending, the same cap in place for fiscal 2022. But in a significant change, lawmakers will now be able to request as many as 15 earmarks, five more than the 10 requests they were permitted in fiscal 2022.

“I am thrilled to announce that your Community Project Funding items in the fiscal year 2022 Omnibus are now enacted into law. This would not have been possible without your hard work to select high-quality projects for your district,” said House Appropriations Chair Rosa DeLauro (D-Conn.) in a “dear colleague” letter last week.

Fiscal 2022 earmarks totaled around $12.5 billion, $2.5 billion under the roughly $15 billion earmark cap, allowing room for growth. The cap was not met as many conservatives declined to take earmarks that they consider to be wasteful spending. An analysis from E&E News found that many climate mitigation earmarks were steered to rich, white districts (Climatewire, March 21).

Democrats kept other major earmarking rules in place, including allowing the spending to only go toward state and local government efforts or nonprofit groups and strict disclosure requirements.

Schedule: The Senate Budget hearing is Wednesday, March 30, at 11 a.m. in 608 Dirksen and via webcast.