3 things we know about Irma 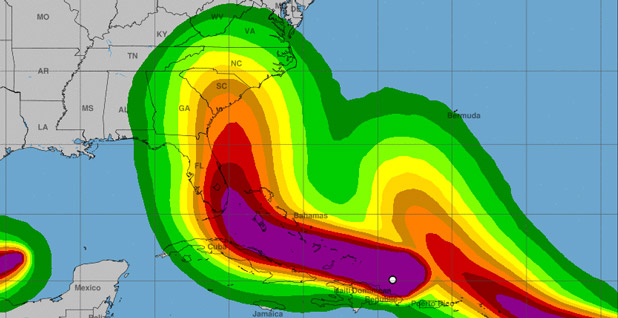 Hurricane Irma is projected to be among the worst storms in U.S. history. National Hurricane Center

Irma is one of the most powerful storms ever recorded

Hurricane Irma is a Category 5 storm and a "dangerous major hurricane," according to the National Weather Service. Longtime observers have been shocked by its power and have warned that it could be one of the most infamous storms in Atlantic hurricane history. "Irma has me sick to my stomach," Eric Blake, a scientist at the National Hurricane Center, wrote in a Twitter message. "This hurricane is as serious as any I have seen. No hype, just the hard facts. Take every life saving precaution you can."

The storm statistics for Irma are stunning in their power to devastate. Irma has two eyewalls, with winds clocked at 185 mph at its center and at more than 100 mph at its second eyewall. It’s moving to the west at 16 mph. Wind gusts have hit 210 mph.

The hurricane’s strongest sustained winds, at 185 mph, blew for more than 65 consecutive hours, something no other tropical cyclone has done in the modern satellite era, which began 50 years ago, according to Philip Klotzbach, a meteorologist at Colorado State University.

Irma also has one of the lowest pressures, at 914 millibars, ever recorded in a storm, according to Blake. Low pressure helps to form hurricanes, as a cycle of warm air rushes upward and cold air sinks. As that process happens, over and over, hurricanes become more powerful. The last Category 5 hurricane to hit Florida, Andrew in 1992, had a similar pressure rating, at 922 millibars. That number is expected to keep fluctuating in the coming days and will give researchers an idea of Irma’s power before it makes landfall.

Irma is also one of three hurricanes now formed in the Atlantic Ocean, something that has not happened in seven years. It is followed by Hurricane Jose, which was upgraded to Category 3 yesterday, though it is unclear whether that storm will hit the United States. Hurricane Katia, a Category 1 storm, is on track to hit southern Mexico this weekend. The only other times there were three hurricanes in the Atlantic, when at least two of them were considered major storms, were in 1893, 1961 and 2010, according to Klotzbach.

The destructive power of hurricanes is largely informed by the geography of the region they hit. Flooding caused most of the damage to Houston when it was struck by Harvey, because of the way the city is laid out and how the storm parked over the city for days. In Florida, high winds could cause tremendous destruction. A Category 5 storm can rip off roofs, crumble walls and shred electrical grid infrastructure. Miami is one of the nation’s most vulnerable cities to sea-level rise, and it already experiences nuisance flooding on sunny days. A storm surge of 10 feet, which is predicted, could devastate a significant swath of the city.

What’s more, Florida is a much different state from when it was devastated by Hurricane Andrew in 1992. It has seen a building boom, and there are millions more people there. The population has grown 24 percent since 2000, from 16 million to about 20 million.

The storm can’t yet be seen from the Florida coastline, but officials are already thinking about rebuilding the infrastructure it threatens to demolish. Yesterday, a Florida Power & Light Co. official said that even though the utility was prepared for the storm, it could lead to "a rebuild of our entire infrastructure." Even more dramatically, the National Weather Service has warned that parts of Florida may be uninhabitable for weeks or months.

A complicated relationship between Irma and climate change

Yes, climate change is affecting Irma, but scientists don’t claim it’s causing the storm. The hurricane is spinning over waters that have warmed in the last century as a result of human activity. Oceans absorb about 90 percent of man-made warming, and warm waters fuel hurricane activity, according to NASA. And climate change has led to more water vapor in the atmosphere, which increases rainfall totals. Irma threatens to drop 2 to 20 inches of rain on Florida, and it has the potential to create "life-threatening flash floods and mudslides."

In Florida, sea-level rise is already causing flooding. Storm surges of 5 to 10 feet, which the National Weather Service said are "life threatening," are predicted for much of South Florida.

Florida is also experiencing sea-level rise as a result of glacial melting, according to a paper published yesterday in Geophysical Research Letters. Melting glaciers in Greenland and Antarctica have caused sea-level rise in some regions more than others. The non-uniform rise is a result of gravity being altered. Melting from Antarctica has led to 52 percent greater sea-level rise in Florida than in other parts of the world, according to Isabella Velicogna, an earth science professor at the University of California, Irvine, and the paper’s author. And if Antarctic melting increases, as some research predicts, that sea-level rise will become more profound, worsening future storm surges, she said.

The rise of sea levels, when combined with more intense storms in the future, would be a deadly combination, she said. "With the warming, we expect an intensification of the strength, the frequency of hurricanes and extreme events," Velicogna said. "The sea levels are rising more there, so it’s going to intensify again those effects."

While scientists have talked for years about an approaching era of "super-hurricanes," the data do not yet support the conclusion that we’ll see more big storms on a regular basis, said Tom Knutson, a NOAA meteorologist at the Geophysical Fluid Dynamics Laboratory in Princeton, N.J.

"We really can’t detect these changes yet in the existing data in the way we can detect in changes, for example, in the global mean temperature," he said. While both Harvey and Irma` are record-setters, NOAA doesn’t see a "clear existing signal in storm data" going back to the 1800s that proves the two storms are part of a departure from the cycle of natural variability.

Computer models, on the other hand, project that the strength of Atlantic hurricanes could increase by roughly 3 percent and hurricane rainfall rates by about 10 percent by 2050, based on rising sea surface temperatures and a warming atmosphere that can carry more water vapor.

The problem is that real data are spotty. Knutson suspects that storm data from the 1800s, based on landfalls and ship logs describing storms at sea, appear to have undercounted the number of storms. "We think that’s likely because there were a limited number of ships traveling around in early times," he said.

Dependable accuracy in counting and measuring the strength of hurricanes didn’t begin until the 1960s, with the launch of space satellites. He said scientists need about a century’s worth of good data to start making sophisticated predictions about the influence of human-caused climate change on hurricane frequency.

This data gap is one reason why NOAA is being cautious about superstorm predictions. The second reason, he explained, stems from odd swings in Atlantic hurricane activity that scientists still don’t understand. Storms of the ’60s, ’70s and ’80s were fairly pedestrian compared with those of the 1940s and ’50s. Stronger storms picked up again around 1995.

"That type of variability makes it really hard to see long-term trends of the type that we would anticipate would be arising from greenhouse warming," Knutson said.

"The models we use for these purposes are getting better," he added, "but we have to be cautious about how much credence to put into the model projections, especially when we don’t see the clear trend in the data."