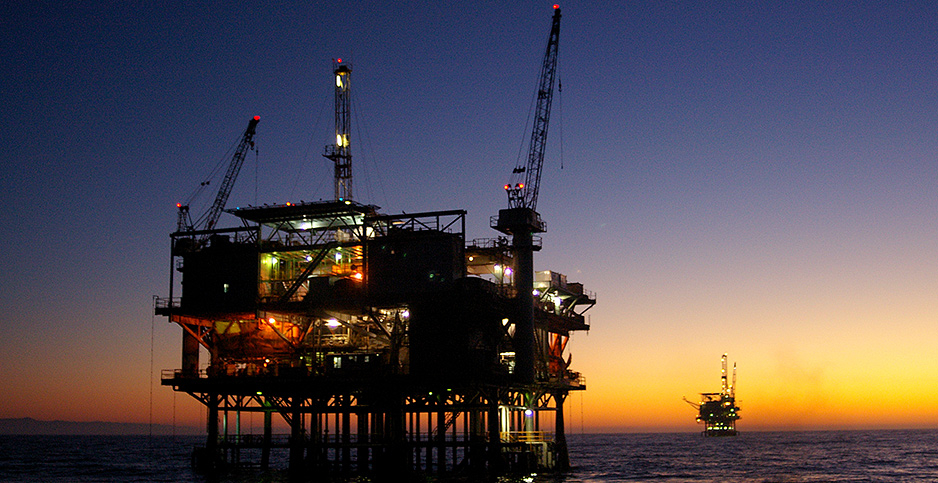 The oil platform Houchin is seen off the coast of California. Bureau of Ocean Energy Management/Flickr

Thousands of workers out of a job by 2021, billions of dollars bled from companies in Houston, illnesses at refineries and remote oil fields: The novel coronavirus’s impact on the oil and gas sector is a string of devastating losses and growing risks.

The COVID-19 pandemic has frozen economic activity across the world, stalling flights, shuttering business and pushing people indoors. That halt on travel has instantly shrunk demand for the crude oil that’s used to make gasoline, diesel and other fuels.

The damage to oil demand has overshadowed a supply side risk caused by a price war between Saudi Arabia and Russia. The countries promised to flush cheap oil onto the oversupplied market after their negotiations on production caps broke down in early March.

President Trump said yesterday — as national benchmark oil prices hovered under $25 a barrel — that he hoped to end many U.S. travel and business shutdowns by Easter on April 12. But analysts consider near-term shocks to be just the beginning of the oil and gas industry’s woes.

Oil prices will likely "cascade lower," said Rystad Energy’s head of oil markets, Bjørnar Tonhaugen, in a note yesterday. "The extreme imbalance between supply and demand due to the travel restrictions has only just began to unfold in the physical markets, and the true impact will be felt in the coming weeks."

While effects are still being tallied, here are three takeaways from an oil sector in the grips of a global pandemic.

In response to failing prices and demand weakening, companies have promised extreme belt tightening ahead, scaling back spending forecasts and retreating on programs to return profits to investors.

"For companies, this is about reducing spending to try to maintain as much of their dividend as possible," Webster said via email. "Share buybacks have also been cut sharply. Where possible, these cuts will be focused on exploration and other long-lead items as they relate to production."

California-based Chevron Corp. became the latest major oil and gas company to commit to cuts, announcing yesterday it would reduce its 2020 capital spending by 20%, or $4 billion.

The biggest part of that reduction will happen in the Permian Basin, where Chevron now says it expects to pump about 125,000 fewer barrels of oil and gas per day in the region by the end of 2020. That is down 20% from where the company stood before the current market slump.

Chevron also suspended its $5 billion-a-year share buyback program after repurchasing $1.75 billion of its shares in the first quarter. Pierre Breber, Chevron’s chief financial officer, said the company’s financial priorities are unchanged and that it would focus on "protecting the dividend, prioritizing capital that drives long-term value, and supporting the balance sheet."

Occidental Petroleum Corp. announced its own cuts two weeks ago, slashing its 2020 capital spending by approximately $1.7 billion. The company’s board of directors also approved a reduction in Occidental’s quarterly dividend by $0.68 per share — its first such cut since 1990.

Other oil and gas majors have also reined in their spending, including Royal Dutch Shell PLC, which said on Monday it would trim its 2020 capital expenditures by $5 billion, down from a previously planned $25 billion.

ConocoPhillips said last week it would cut operational spending by $700 million this year, which the Houston-based company said amounted to a 10% decrease from earlier guidance.

"These reductions are expected to impact 2020 full-year production guidance by approximately 20 thousand barrels of oil equivalent per day," the company said.

Marathon Oil Corp. has also said it will revise its 2020 budget downward by $500 million.

Casey Norton, a spokesperson for Exxon Mobil Corp., said the company did not have anything to add beyond a March 16 statement in which the company said it was "evaluating all appropriate steps to significantly reduce capital and operating expenses in the near term."

In the short term, the spending cuts will mean layoffs and job losses. The first wave is likely to hit drilling rig contractors and oil field service companies that perform hydraulic fracturing and other key jobs.

As many as 100,000 oil field service jobs could be lost by the end of 2021, the investment bank Tudor, Pickering, Holt & Co. wrote in a research note yesterday.

Houston, the nation’s de facto energy capital, could see as many as 40,000 job losses this year, a sharp pivot for a region that’s become accustomed to years of steady growth, according to researchers at the University of Houston (Energywire, March 24).

While it’s unclear how many companies are likely to become insolvent in the current crisis, there was a wave of bankruptcies during the last price crash, which lasted from 2014 to 2016. More than 200 oil and gas firms, with a total of about $120 billion in debt, filed for bankruptcy between 2015 and 2019, according to statistics compiled by the law firm Haynes and Boone LLP.

"It’s going to get really, really ugly," Katie Mehnert, organizer of the trade group Pink Petro, said on a webcast that discussed the downturn.

In the longer term, the drop in prices could convince oil and gas companies to invest more heavily in renewable energy projects.

Even before the downturn, BP PLC, Total SA and Shell, among other international oil companies, had promised to diversify their energy mix in response to climate change and pressure from governments and shareholders (Greenwire, Feb. 12).

Total’s cuts will focus on its oil and gas operations, and the company said it will forge ahead with plans to invest $1.5 billion to $2 billion in renewable energy.

"We must protect our future," Total CEO Patrick Pouyanné said in a message to the Paris-based company’s employees.

At current prices, renewable energy projects like wind turbines and solar panels produce about the same return on investment as oil and gas, said Valentina Kretzschmar, vice president for corporate research at the consulting firm Wood Mackenzie. And the renewable projects carry less risk of price downturn or a backlash from governments.

"Renewables cash flow is more stable, predictable — and bankable — and has a commensurately lower cost of capital," Kretzschmar wrote.

The pandemic has rattled more than the financial side of the oil and gas sector.

Companies are juggling work environments full of potential vectors for transmitting COVID-19. In many cases, workers share close quarters in the oil patch.

Some oil companies are telling employees to temporarily hunker in place on Alaska’s North Slope in hopes of keeping COVID-19 cases from reaching the rural and Native communities that surround Alaska’s most prolific oil play, as first reported by the Anchorage Daily News.

ConocoPhillips has suspended flights for two weeks that would carry workers to the remote area on the Arctic coast that had, as of yesterday, yet to see a confirmed coronavirus case.

The company asked workers currently on the North Slope to extend their multiweek shifts until flights resume and asked incoming workers who have traveled out of state to self-quarantine for two weeks prior to upcoming shifts on the slope. Nonessential personnel on the North Slope has also been asked to leave.

Spokeswoman Natalie Lowman said ConocoPhillips is staying in contact with the Native village of Nuiqsut, which sits within the federally managed National Petroleum Reserve-Alaska, near the company’s oil and gas operations.

"As we move through this, our priorities remain: protect the health and wellbeing of our workforce and their families; help mitigate the spread of the virus; and safely run our business," ConocoPhillips said in a statement. "We do not have a timeframe for resuming business as usual."

BP, which also has workers on the North Slope, has asked all employees to work from home until at least April 15, except for those in safety-critical or operations-critical roles.

The tightening policies arrive amid an uptick in reports of workers testing positive for COVID-19, or displaying symptoms consistent with the new disease, in oil regions across North America.

In Canada’s oil sands region, a worker for Houston-based Civeo Corp. was presumed to have contracted COVID-19 until testing could be completed, raising concerns about what could happen if the pandemic hit isolated "man camps" where workers share close quarters in remote oil and gas fields. Civeo did not respond a request for an update from E&E News yesterday, but the company told Reuters that the ill worker tested negative for the virus.

Anxiety has been rising in the oil patch that thousands of workers would face "hellish" conditions if sickness spreads (Energywire, March 23).

Refiners are likewise responding to the double threat of workforce concerns paired with a sudden reduction in demand for gasoline, diesel and jet fuel.

Marathon Petroleum Corp., the largest refiner in the United States, with a capacity of 3 million barrels per day across its 16 refineries, has had a "pandemic response plan" in place for years that it started using in January, said spokesman Jamal Kheiry.

The plan covers cleaning protocols, travel restrictions, business continuity plans, and communication with workers about health risks and mitigation measures, he said in an email.

The company confirmed that one employee at a refinery in Los Angeles had tested positive for the virus last week and is now in quarantine. Other workers who had been in contact with the employee were sent home and were under the oversight of local health officials, but the refinery continued operations, according to Marathon.

Kinder Morgan Inc., which employs more than 11,000 people across the country, confirmed "a few employees" have tested positive and that the company is monitoring the situation. The pipeline and oil and gas terminal operator has implemented split shifts and alternate work locations to distance employees from one another. Despite shelter-in-place guidelines spreading across the country, Kinder Morgan energy facilities are defined as "critical infrastructure" and continue to operate, a spokeswoman told E&E News yesterday.

Oil operators from BP to independent producers are also continuing to share the now-ubiquitous health guidance to stop the spread of the disease: Wash your hands and don’t touch your face.