31% of homeowners in Dorian’s path had dropped flood insurance 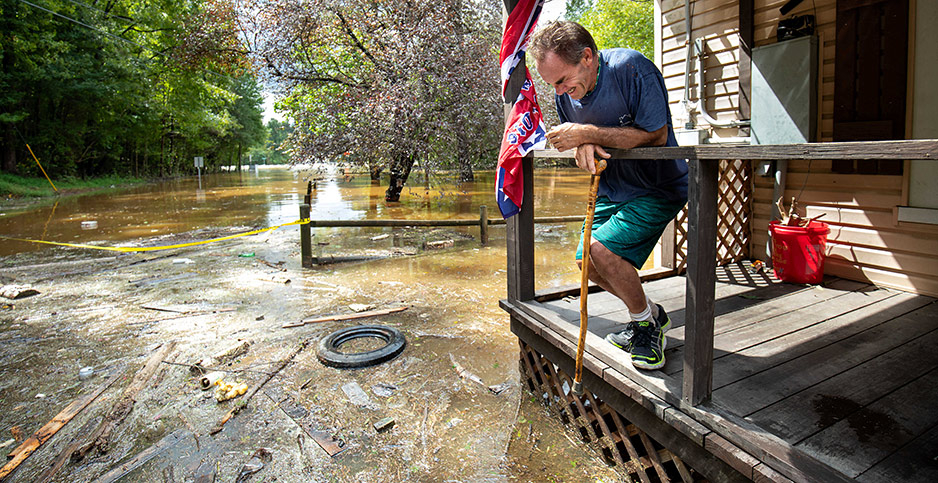 Jerry Henley buckled under grief after his home in North Carolina was flooded during Hurricane Florence in September 2018. A year later, many residents in areas threatened by Hurricane Dorian have dropped their flood insurance policies. Jerry Wolford/Polaris/Newscom

Tens of thousands of homeowners in Hurricane Dorian’s path are facing financial peril because they had dropped flood insurance coverage in recent years, an E&E News analysis of government records shows.

Owners of residential and commercial buildings along the southeast Atlantic coast have been steadily giving up flood insurance policies, even though their properties are in high-risk flood zones and they are required under federal law to maintain the coverage.

Dorian has doused the southeastern coast and threatens to cause "major flooding" today in parts of North and South Carolina, NOAA meteorologist Ken Widelski said yesterday.

Anna Weber, a senior policy analyst and flood insurance expert at the Natural Resources Defense Council, said, "Individuals are going to wake up tomorrow and look at their homeowners policy and realize the damage to their home isn’t covered."

Hundreds of thousands of people could be in that situation.

An E&E News analysis of government data shows a steep drop in the number of federal flood insurance policies in the 59 counties in Florida, Georgia, North Carolina and South Carolina that have been under evacuation orders related to Dorian.

The drop occurred in almost every county and was particularly sharp in heavily populated areas such as Palm Beach County, Fla., and Beaufort County, S.C.

The decline in flood coverage along coastal Florida, Georgia, North Carolina and South Carolina reflects a nationwide trend and has occurred despite federal efforts to sharply increase the number of people with policies as climate change intensifies flood damage. Flood coverage is provided through special insurance policies because standard homeowners insurance does not pay for flood damage. The federal government provides almost all of the nation’s flood insurance.

Property owners without flood coverage can get taxpayer-funded federal disaster relief, which pays for limited home repairs, or low-interest disaster loans from the Small Business Administration if they have adequate credit and finances.

The E&E News analysis includes only policies provided through the government’s National Flood Insurance Program and excludes policies written by private insurers. Some property owners could have switched from the NFIP to private coverage, which accounts for only a small fraction of flood policies.

The trend in the 59 southeastern counties reflects a nationwide decline in the number of NFIP policies, from 5.65 million in 2011 to 5.2 million in 2018.

"A lot of the time what you’ll see is a big spike after a big flood event as people realize flood insurance could be a good investment. Over the next few years it sort of tails down," said Weber of NRDC. "There is a certain amount of flood amnesia that happens in communities where a flood doesn’t happen for a while and you want to put your money toward other things."

R.J. Lehmann, who analyzes financial services at the R Street Institute, a libertarian think tank, said rising insurance premiums under the NFIP have driven policyholders away. A federal law enacted in 2012 led to substantial premium hikes as Congress sought to reduce the number of policyholders that received discounts.

The Federal Emergency Management Agency runs the NFIP. In a news briefing yesterday about Dorian, FEMA Associate Administrator Jeffrey Byard declined to speculate about what caused a decline in flood coverage when asked by E&E News.

"We’re dealing with human interest and human decisions," Byard said. "What our job is is to continue to push the insurance message. Whether our citizens take that, that is a personal choice. … Flood insurance is one of the best ways to recover after a disaster."

FEMA has set a goal of doubling the number of people with flood insurance by 2023, and it hopes to encourage companies to enter the market. Private insurers have long eschewed flood coverage because the damage is so unpredictable, but Lehmann believes that major insurers such as Allstate Corp. and State Farm could make a difference.

"I do think there’s something to be said for the private insurance industry’s talent at marketing," Lehmann said. "They are willing to spend money to market it if they had incentive to do so."

Congress has sought for two years to overhaul the nation’s flood insurance system. There are competing bills in the House and the Senate. The House bill, which has passed a key committee, would subsidize policies for low-income people. The Senate bill, sponsored by a bipartisan group of lawmakers, would require property owners to tell prospective buyers whether the property had been flooded.