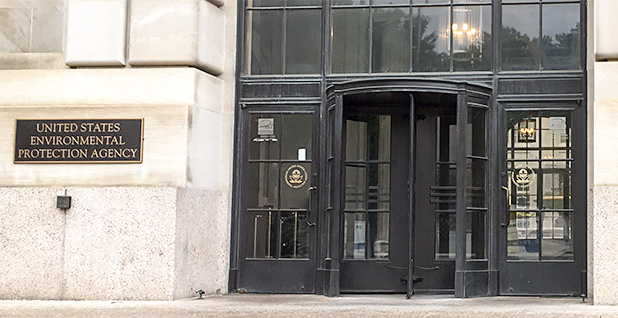 U.S. EPA’s Board of Scientific Counselors has canceled all subcommittee meetings for late summer and fall. Claudine Hellmuth/E&E News

U.S. EPA Administrator Scott Pruitt continues to clear out a key advisory committee, signaling plans to drop several dozen current members of the Board of Scientific Counselors (BOSC), according to an email yesterday from a senior agency official.

All board members whose three-year appointments expire in August will not get renewals, Robert Kavlock, acting head of EPA’s Office of Research and Development, said in the email, which was obtained by E&E News.

Because of the need to reconstitute the board, EPA is also canceling all subcommittee meetings planned for late summer and fall, Kavlock said.

"We are hopeful that an updated BOSC Executive Committee and the five subcommittees can resume their work in 2018 and continue providing ORD with thoughtful recommendations and comments," he wrote in urging departing members to reapply.

The board, whose members are chosen by Pruitt, advises EPA on technical and management issues related to its research programs. First-term board members typically receive a second three-year reappointment. Last month, however, Pruitt broke with that tradition in opting not to renew the appointments of nine BOSC members. The new round of non-renewals will bite much deeper, BOSC Executive Committee Chairwoman Deborah Swackhamer, professor emerita at the University of Minnesota, indicated in an email today to E&E News.

Of 49 remaining subcommittee members, 38 will not be renewed at the end of August, leaving a total of 11, she said. None of the subcommittees will have a chair or vice chair, Swackhamer said, while the executive committee will have three members. While EPA is already seeking nominations to fill out the board, the deadline is the end of next week, she noted.

When the first round of non-renewals became public last month, an EPA spokesman noted that reappointments were not guaranteed and that the agency wanted to ensure fair consideration of all nominees for advisory board posts.

In a statement today, spokeswoman Amy Graham said the agency is grateful for the service of BOSC members and is encouraging those with expiring terms to reapply.

"We are taking an inclusive approach to filling future BOSC appointments and welcome all applicants from all relevant scientific and technical fields," Graham said.

But the first round sparked backlash from congressional Democrats and accusations that Pruitt is seeking to make room for industry representatives who will undercut the integrity of the board’s work.

"This says to me that they do not want objective science," Peter Meyer, an economist who resigned in protest last month, said in an interview this morning.