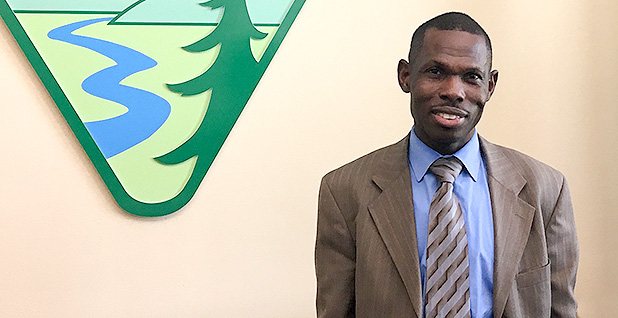 Addressing a backlog of applications for permits to drill is among Mike Nedd's priority tasks as acting director of the Bureau of Land Management. Photo by Pamela King

The Bureau of Land Management is staring down the task of tackling nearly 3,000 outstanding bids to drill on public land.

"It may be a strike team. It may be shifting the workload to a different office," he said. "The idea is to really look around and find how best to address this backlog and where the capabilities for doing so lie."

The APD pileup is concentrated in BLM’s Carlsbad, N.M., and Casper, Wyo., field offices, Nedd said. Those offices have experienced a crush of applications to develop in the San Juan Basin and Niobrara Shale — two of the areas of highest interest among industry groups, he said.

"I think what we’re seeing is that it depends on where industry has set up their infrastructure and where their business leads are taking them," Nedd said. "Clearly, in the West, there is lots of interest."

But BLM maintains that it is staying ahead of industry demand. Despite the backlog, the bureau says it is approving APDs nearly twice as fast as companies are drilling wells.

In 2014, then-Director Neil Kornze testified that BLM was providing about two years’ worth of headroom to industry. At that time, the bureau had approved nearly 7,000 APDs that were still awaiting industry action.

The glut of unused permits has puzzled the top Democrat on the Natural Resources Committee. Rep. Raúl Grijalva of Arizona last month raised the question to BLM in his request for data on the current APD backlog (E&E News PM, April 12).

"Obviously the BLM isn’t responsible for individual company decisions on when to drill, but it is bewildering that the agency would prioritize approving more permits — at the inevitable expense of your environmental responsibilities — when companies have plenty and appear to be simply stockpiling them," Grijalva wrote.

But industry groups say the number of idle permits is of little relevance because — due to government inefficiencies and unpredictable pricing — companies need to collect more permits than they actually use (Greenwire, Oct. 23, 2014).

"The backlog of applications for permits to drill is still a very real issue that our member companies are facing," said Neal Kirby, spokesman for the Independent Petroleum Association of America (IPAA). "Every day that goes by while independent producers — companies with an average of 12 employees — wait for their permits to be approved means more money out of their own pockets, more business uncertainty as it relates to long-term planning, and less royalties flowing back to the federal and state treasuries to help fund priorities, such as education and infrastructure projects."

IPAA has urged BLM to use every tool at its disposal to improve the permitting process.

There are a few new instruments in BLM’s toolkit that could help address the backlog.

The fiscal 2015 National Defense Authorization Act created a project to direct back to seven BLM field offices a portion of the fee submitted with each APD. That new revenue stream was designed to enable the busiest offices to hire employees to help process permits in a more timely fashion.

"Utilizing this tool alone will provide BLM greater flexibility and will help improve the efficiency of the permitting process," Kirby said.

While BLM confirmed that the fee allocation is being implemented, a progress report — the first of which was due in February 2016 — is still underway.

BLM is also in the initial stages of deploying its automated fluid minerals support system to standardize APD processing.

"We began to implement that in 2016, and that’s been promising, but like any computer system you implement, it takes some iterations to get it perfect," Nedd said. "We believe that’s going to be a big help."

The bureau is taking stock of its field office operations to see if there are any best practices that could be translated to a broader scale, Nedd said.

Nedd said clearing the APD backlog is consistent with BLM’s new aim of opening up additional lands for energy development.

Nedd hesitated to say that BLM would add new environmental protections over drilling, suggesting instead that safeguards would be baked into the permitting process. He said the bureau is still brainstorming ideas for improving that process in a way that will also ensure that applications don’t sit too long in the queue.

"We want to make certain that when we develop with industry, we are not creating undue or unnecessary burden," Nedd said. "Again, it’s that balanced approach. How do we do it in a manner that is safe and balanced?"

Whether BLM’s approach translates to more drilling on federal lands depends on energy companies’ thirst for new development, he said.

"I think by all accounts, industry is really saying, ‘Yes, we would like to develop the resource that is available,’" he said.