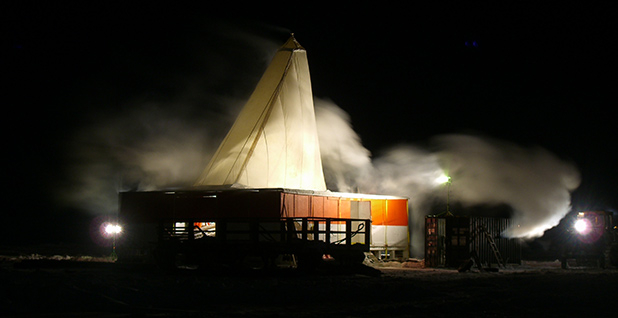 Drilling on Lake El'gygytgyn in spring 2009 was carried out in two 12-hour shifts. The container in the front encloses generators for energy supply. Photo by Anders Noren, courtesy of the University of Massachusetts, Amherst.

In 2009, studies of deep sediment layers from a largely unknown, unexplored lake in the tundra of Russia’s eastern Arctic released a flood of new evidence about what global warming had done to the Arctic 3 million years ago.

It is a distant mirror reflecting an image of growing climate instability that scientists warn is beginning to reappear today. For many Americans, the message from the past is not good news. It suggests rapid global warming with melting polar ice and big, yo-yo-like ups and downs in sea levels, as well as the cooling of ocean currents that warm the North Atlantic.

The details are fleshed out from tiny biological "proxies." Some came from the silica skeletons of colonies of diatoms, a tiny, one-celled form of algae that once lived in the lake. Others were gleaned from microscopic breathing holes in fossilized tree leaves called stomata that yielded estimates of carbon dioxide in the ancient atmosphere. More organic matter gave scientists indirect measures of what the lake’s temperature was when the creatures found in the sediment were alive.

The lake, called Lake El’gygytgyn (pronounced el-geegitgin), had collected and preserved an enormous ooze of these life forms over millennia. It helped scientists examining the sediment to determine their era, its precipitation, and its warming and cooling cycles.

A rain of pollen from ancient forests gave Julie Brigham-Grette, a geologist from the University of Massachusetts, Amherst, a picture of the vegetation around the lake. She had spent the better part of a decade organizing a multinational expedition of scientists and engineers to examine the lake.

In 2009, they perched a special drilling rig on the surface ice in the middle of the now-frozen 3.6-million-year-old lake. The resulting cores of sediment pulled from the lake floor were full of surprises.

"We’ve found evidence of Douglas fir trees, walnut and hemlock, things that shouldn’t be in the Arctic," recalled Brigham-Grette.

But there were also other things that shouldn’t have been there, signs that she found disturbing.

‘We don’t get the Pliocene’

One of the "most astounding things" in the sediment, she said, was evidence that ancient summer temperatures in the region had spiked by as much as 14 degrees Fahrenheit higher than today, not just once, but several times in the past.

That meant the Arctic was heating faster than other parts of the world, and the temperatures needed to do that likely melted the Arctic Ocean’s summer sea ice and Greenland’s massive glaciers. Scientists have since estimated that it was enough heat to raise global sea levels somewhere around 60 to 78 feet, and the oceans’ ups and downs appear to have happened repeatedly in what is known as the late Pliocene Epoch — about 3.3 million to 3 million years ago.

There is no direct way to measure the atmosphere of this ancient time, but repeated estimates from leaf stomata, ocean fossil studies and other remnants now put its carbon dioxide content at around 400 parts per million — about where it is today, largely due to the sharp rise of CO2 and other greenhouse gases since the Industrial Revolution began, literally gaining steam in the 1850s.

According to Brigham-Grette, that means the Earth is much more sensitive to climate change now, and it is speeding up as the planet tries to reach equilibrium from the new injection of heat. "The ice sheets are responding in a massive way to what we’ve done over the last few decades," she said. As she described it, the planet is taking a trip into the unknown, with millions of people and billions of dollars locked in threatened real estate along our coastlines.

"So we’re on the train, and the train has already left the station at high speed. We could take our foot off the pedal, but it’s going to be a long time for that train to slow down. There’s this long lag period that’s affecting these ice sheets. That’s very difficult for most people to understand," she said.

The findings of the science team at Lake El’gygytgyn were also very hard for experts who use computer-driven climate models to understand. They pride themselves on being able to predict the speed of climate change in the future and also in the past by use of a technique called "hindcasting."

In the case of the late Pliocene, though, the models missed the ice melting. Yet the data collected from drilling in the Arctic and more recently from the Antarctic suggest it happened not just once, but repeatedly at both poles.

James White, a paleoclimatologist and climate modeler at the University of Colorado, Boulder, said Brigham-Grette’s study is "one of the more important paleoclimate studies of the last 10 years."

"The fact that we don’t get the Pliocene is a concern," he explained, because over the years, the modelers and the data gatherers have helped each other perfect their understanding of climate change and how to improve the models.

"We’re not in equilibrium now, not even close," he asserted, as the planet’s oceans struggle to distribute the new influx of heat. "Basically, it takes a while for the water that’s been put on the stove here to warm up. That’s the good news. The bad news is, once the ocean is warmed up, it’s going to take a very long time to cool off, too."

"There are some definite mismatches," said Harry Dowsett, the lead scientist on the Pliocene work at the U.S. Geological Survey. "In the high-latitude Atlantic Ocean, we know it was significantly warmer in the Pliocene, and the models don’t show that, and we want to know why."

Threats to American and Chinese coastlines

Dowsett has written that the data from Lake El’gygytgyn are the longest and most complete land record of the Pliocene climate ever collected. Meanwhile, drilling in the Antarctic has tended to affirm that both polar regions have had a more dynamic history of melting and cooling than scientists had previously thought.

White, of the University of Colorado, agrees that the road ahead "is going to be an interesting ride. There will be thresholds crossed, some of which we can perhaps point to — things like the North Atlantic circulation — and some of which we just don’t know about. The climate system is not about a monotonic change happening in a linear fashion. It is more like one that goes rapidly from one state to another state. We’re helping the ride happen."

One of the thresholds he mentioned, the North Atlantic circulation, is the familiar pattern of its currents including the Gulf Stream, which warms both the U.S. East Coast and northern Europe. Some scientists say there are unprecedented signs that it has been weakening, driven by the increase in colder, melting glacier ice, since 1975.

White pointed out that scientists in Russia and China have recently become more interested in paleoclimatology, or the study of past climates, than they have been in the past. "It’s not as if the rest of the world is sort of sitting back and saying, ‘Oh, the Americans will figure it out,’" he said. "That’s not happening."

"The Russians are interested for a very good reason. Russia stands to gain the most by a warmer Arctic in terms of land that they can access that will produce better farming, you name it," he said.

The biggest losers, other scientists predict, will include the United States and particularly China — the globe’s biggest greenhouse gas emitters. They have long coastlines with major cities that could be overwhelmed by polar ice melting that could begin to accelerate within the next 50 years.

A new Japanese study, published in February written by scientists from a team exploring ice cores drilled in Antarctica, found that ocean warming currents carrying heat from the tropics have become more unstable in the North Atlantic because of colder fresh water dripping from the melting ice of glaciers in Greenland. The phenomenon is called "freshwater hosing," which also appears to have happened in the ancient past.

Are we seeing a repeat of more troublesome times? The value of researching ancient climates, said Mark Serreze, the director of the National Snow and Ice Data Center (NSIDC) in Boulder, Colo., "is that it gives you information of what the climate system is capable of doing. If we know that it could do these things in the past, OK, that’s good cause for concern."

The NSIDC, which is part of the University of Colorado and works in close partnership with the National Oceanic and Atmospheric Administration and NASA, is also following a huge crack that is now speeding across Antarctica’s fourth-largest ice sheet.

Because the ice shelf is attached to land but already floating in the ocean, it will not raise sea levels, but Serreze said his experts worry that if it breaks off — creating one of the worlds largest icebergs — the land-based glaciers pushing behind it will flow more strongly into the ocean, "And that would dump lots of freshwater that was on land into the ocean," he said.

The NSIDC has also been tracking an unusual series of heat waves flowing deep into the Arctic this winter. The agency discovered that the heat waves were caused by "very, very strong" cyclonic storms pushing heat up from the south. "So that’s the proximate cause," Serreze said, "but the deeper question is, why have we gotten into this pattern?"

The polar changes are "almost happening too fast right now for us to be able to keep up with them," he added.

Brigham-Grette, the American scientist whose research helped push the world’s growing interest in paleoclimatology, worries that the United States will not be politically ready for the more rapid and potentially more damaging changes that now appear to be on the horizon.

Several Trump administration officials have openly disputed the scientific consensus of man-made global warming. Meanwhile, government leaders in some vulnerable coastal states, including the Carolinas and Florida, have occasionally forbidden underlings to even mention climate change, she noted.

"There’s this attitude of ‘Well, we’re Americans, and we’re going to tough it out and help people rebuild along our coastlines,’" she said. "Well, that’s sort of stupid, because we’re putting people and infrastructure back in harm’s way."

Taxpayers, she warned, "really have to think about how do we organize a cheaper, more managed retreat from our vulnerable coastlines. You know, how do we pull back as sea level comes up, because we’re not going to stop it."