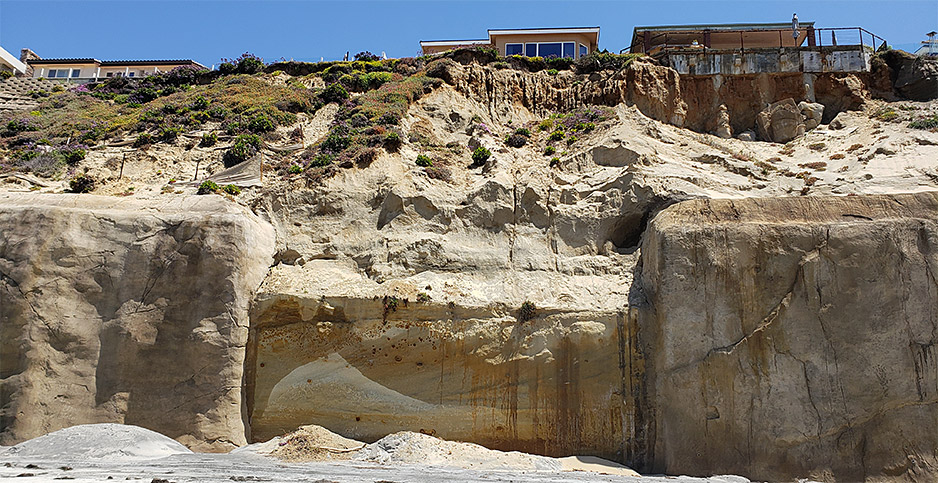 A California house in Solana Beach likely will get a sea wall despite regulators' bid to block it. Beach protection advocates fear that a new sea wall for the "gap house" (background) will open the door for other California homeowners to get sea walls. Bob Trettin/The Trettin Co.

A California oceanfront home described as a "poster child" for managed retreat is poised to secure sea wall protection despite regulators’ efforts to block it.

The Solana Beach home sits on a cliff that’s eroding, sending chunks of rock tumbling down to the sandy shoreline in San Diego County. As the ocean rises due to climate change, it is expected to deteriorate further. There’s no sea wall beneath the house because the homeowners waived the right to one when they redeveloped the property 25 years ago.

They later sought a wall that the California Coastal Commission denied. But after two years of battles and a lawsuit, the agency has agreed to reconsider the case. In a settlement obtained by E&E News, the homeowners and their neighbors on either side agreed to drop their legal suit once the commission grants a permit. It’s signed by the commission’s executive director and chief counsel, and a state deputy attorney general

Beach protection advocates fear it will open the door for others to get sea walls up and down the coast. That ultimately will drown beaches as higher waters hit the walls, said Kristin Brinner, co-lead of the Beach Preservation Committee for Surfrider’s San Diego chapter.

"If they agree to it, they’re basically saying the deed restrictions they’re placing on homes are not enforceable, and if neighbors work together they can get sea walls in front of homes," Brinner said. "It’s basically sending the signal to anyone else that’s thinking about doing development along the bluff-top, go ahead and build close to the bluff-top, you and your neighbors will figure out how to get a sea wall.

"The beaches are going to be totally destroyed," she added.

By a quirk of California law and policy, only beachside homes built prior to 1970 have the right to install protection from rising waters, under the California Coastal Act. Newer homes, and ones that are significantly redeveloped, typically relinquish the right to a wall, or to replace an existing one once it’s worn out.

Much of the cliff face above the sand in Solana Beach already is armored, and at high tide there often is no dry sand (Climatewire, July 31, 2017). The house in question, at 245 Pacific Ave., is dubbed the "gap house" because it’s above a bluff with concrete sea walls stretching 1,300 feet to the north and 400 feet to the south.

The four-bedroom, three-bathroom, nearly 3,250-square-foot house is valued at $4.3 million, according to Zillow.com.

The fight extends beyond the one home. The U.S. Geological Survey in 2017 projected that California could lose as much as two-thirds of its beaches to sea-level rise by 2100, unless there’s human intervention (Climatewire, July 12, 2017). The California Coastal Commission, which oversees development near beaches, in recent years has strived to limit new sea walls.

The agency has required property owners who redevelop homes to agree to conditions that include waiving the right to shoreline armoring in the future. The agency also requires homeowners — including the one in this case — to agree they’ll remove portions of the home if it’s deemed dangerous by an official analysis and government decision. They must put the conditions in their property deed, to alert future buyers.

Though prospects for the sea wall look improved, the deal is not yet complete. The commission did not commit to approve the sea wall, spokeswoman Noaki Schwartz said in an email when asked about the new settlement.

"We retain full discretion to approve, deny or condition the new Coastal development application," she said. "In this case the Commission hasn’t made a decision and won’t until it comes for a hearing in the future.

"As an agency, we are concerned about the impacts of seawalls on the coast, there are some instances where seawalls are appropriate and required by the Coastal Act," she added. "The Commission will look carefully at this new application to determine whether this proposed seawall and proposed mitigation is consistent with the Coastal Act."

Anders Aannestad, an attorney for those seeking the sea wall, was optimistic about his clients’ prospects.

"Our expectation is that the Commission will approve this legally valid seawall to fill the dangerous gap, consistent with the fully executed settlement agreement signed by the Commission’s Executive Director and its Chief Counsel," Aannestad said in an email. "That approval has to be voted on by the Coastal Commission at a public hearing. If the Commission does not vote to approve at the hearing, the litigation will continue."

Surfrider argues the solution is to remove the parts of the home that are in danger. The commission has said the home doesn’t yet meet the criteria to do so, as agreed to in the owners’ 1996 redevelopment permit.

The homeowner in this case, Eron Jokipii, and his neighbors on either side sought a sea wall permit in 2019. The commission denied it, saying the Jokipii family — when it built a new home on the site in 1996 — knew it was building too close to the cliff edge. It agreed to forgo a sea wall in the future.

Then last year three neighbors, the Richard Schrager, Mark Van Oene and Robert DeSimone families, applied separately for a permit to erect the sea wall in front of the "gap house." The neighbors’ homes were built prior to 1970, and they therefore had the right to protection, they argued. The gap in a sea wall imperils their homes as the cliff erodes, they said.

Those families also argued that it was a safety issue, that falling rocks pose a threat to beachgoers. In 2019, a 30-foot-long slab of cliff crashed to the sand in Encinitas, 3 miles north of Solana Beach. It killed three women.

Commission staff last year recommended approving the wall, saying there was no other feasible option to meet the rights of neighbors. But the commission voted against it, with some members saying it "smelled funny" that the neighbors were the ones applying though the Jokipii family would benefit directly from a sea wall.

Commissioner Roberto Uranga at the September 2020 hearing called the Jokipii house the "poster child" for managed retreat, or removing properties to let the ocean move inland as seas rise. The commission has battled with coastal cities about preparing for retreat in the future. Powerful owners of multimillion-dollar houses have armed themselves with attorneys and decried the concept.

"We need to look at managed retreat eventually because that’s what this all means," Uranga said at the hearing. "If we don’t make a stand now, when are we going to do that? We need to basically send a message out there that these projects are precariously close and dangerous. No level of mitigation is going to address whatever happens out there."

The case was set to come before the commission earlier this week, for a procedural vote to approve a revised staff report consistent with the September 2020 vote. The matter was pulled from the agenda the morning of the meeting. E&E News learned the families had signed the settlement with the agency and submitted a new application for the wall.

The Jokipii family as part of the settlement agreed to pay $140,000 in mitigation. That money could be used for sand replenishment.

At the September 2020 hearing, some commissioners said mitigation fees in the case were insufficient. At that time, the fee would have been $60,000.

"I wish I could lease a piece of public property for that small amount of money," Commissioner Mike Wilson said. "It’s shocking to me. It just speaks to structural inequalities and entitlements that some people have and others don’t."