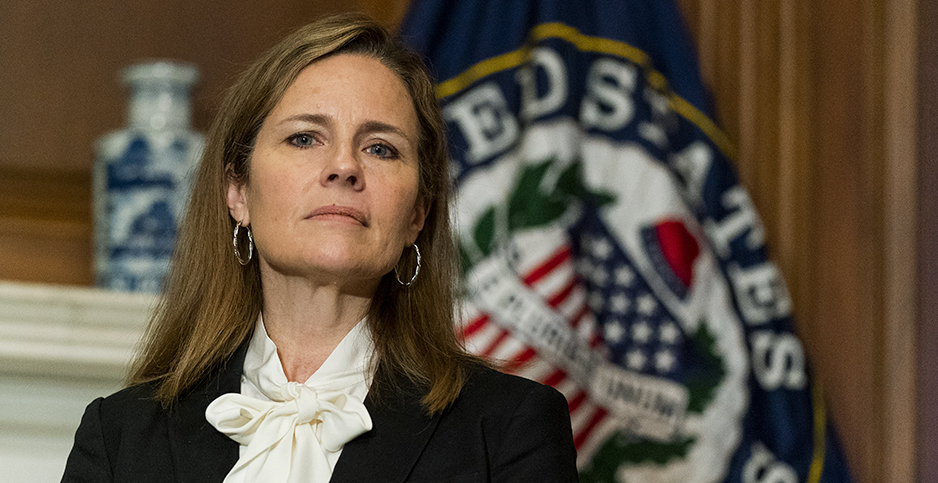 Senators are getting ready to grill Supreme Court nominee Amy Coney Barrett next week on a wide variety of issues including reproductive rights and health care access.

It’s unclear if she will face questions on climate, but at 48, Barrett is poised for a lifetime appointment on a bench that could eventually grapple with major legal battles over rising temperatures, swelling seas and rampant wildfires.

While climate litigation has exploded in recent years, many cases are still making their way through the lower courts. The Supreme Court last week agreed to review a procedural battle stemming from Baltimore’s effort to get the oil and gas industry to pay up for global warming impacts, but the judiciary has not yet sunk its teeth into the meat of many climate disputes (Climatewire, Oct. 5).

"The tools that are in the legal toolbox don’t fit perfectly this new emerging risk," said former Los Angeles County Superior Court Judge Alice Hill. "It will take time for courts to work through [these] questions."

Barrett’s record offers few clues on how she would rule in cases that touch climate issues, but legal experts note that her confirmation would cement the Supreme Court’s conservative majority and could lead to unfavorable outcomes for environmental interests for decades to come.

If President Trump wins the White House, the courts will likely decide climate cases through the lens of regulatory authority, Buzbee noted. The legal considerations could be a bit different under a Biden administration.

"It will be kind of a bit of a replay of the early years of President Trump," he said, "where a President Biden and his agencies will be going back and starting the process of reexamining and hoping to revise and maybe restore climate-related regulations."

Here are four major climate questions that may face the courts during Barrett’s potential tenure on the nation’s highest bench:

Can the federal government regulate emissions?

Questions over who can sue and what level of deference courts should give federal agencies would be a crucial part of legal battles over climate rules that may be ushered in by future administrations (Climatewire, Sept. 22).

Barrett’s record indicates that she might take an unfavorable view of environmental groups’ standing to file lawsuits or of Chevron deference, which gives agencies like EPA leeway to interpret statutes like the Clean Air Act (Greenwire, Sept. 26).

"The vote calculus on the Supreme Court for administrative law cases is so important to environmental and climate issues because they treat it through that lens primarily," said University of Denver law professor Wyatt Sassman.

"If they have new views on how administrative law works, that also is a really big deal for environmental and climate law."

Efforts by states like California to adapt to and mitigate climate change will also be subject to judicial scrutiny in the coming years.

"Some members of the Supreme Court and lower courts view environmental law as impinging … on areas of historic state power," he said. "And so they sometimes read statutes to resist federal regulation, even though the statutes are quite strong in their actual terms."

On the other hand, federal jurists may decide that states hold too much power over national interests — as the Trump administration has argued in challenges against California’s ability to set more stringent vehicle tailpipe standards and the state’s emissions pact with Quebec.

"Especially if we have a President Trump for a second term, I think quite a few states are going to do more like California’s been doing — that is, kind of trying to innovate and create good stable markets for clean energy," Buzbee said.

What role should science play in the courts?

The science of linking climate impacts to emissions by a certain entity or industry will play a major role in challenges that allege oil and gas companies deceived the public about their role in contributing to rising temperatures.

Attribution science could eventually serve as a powerful tool in courts that are only beginning to grasp those connections (Climatewire, July 23, 2019).

In litigation from California cities seeking industry payment for climate impacts, U.S. District Court for the Northern District of California Judge William Alsup held a nearly five-hour hearing in which parties on both sides of the case were instructed to give a climate science tutorial.

"This is a serious proposition to try to educate the judge," Alsup, a Clinton appointee, said during the 2018 proceedings.

"As environmental science, ecology and climate science becomes increasingly more complex and … that complexity becomes more common knowledge," he said, "we’ve been seeing courts start to wrestle with ‘Well, how best can I as the judge get my arms around this rather than using the traditional methods of civil litigation?’"

Is climate change an imminent threat?

As catastrophes like wildfires and hurricanes ravage the country, legal disputes will arise over the degree to which the risk of climate-induced disasters must be accounted for in infrastructure development and other endeavors.

"We will experience an explosion of litigation that relates to the foreseeability of climate impacts that harm people and property," said Hill, who is currently a senior fellow for climate change policy at the Council on Foreign Relations.

Judges have already had to make some decisions on whether harm is "imminent" enough in climate lawsuits to establish whether challengers even have the power to sue in the first place.

The Conservation Law Foundation landed a win last month when a federal court in Rhode Island allowed its challenge against a Royal Dutch Shell PLC storage terminal to proceed on the grounds that the facility would likely be affected by floods and severe storms in the near future (Climatewire, Sept. 29).