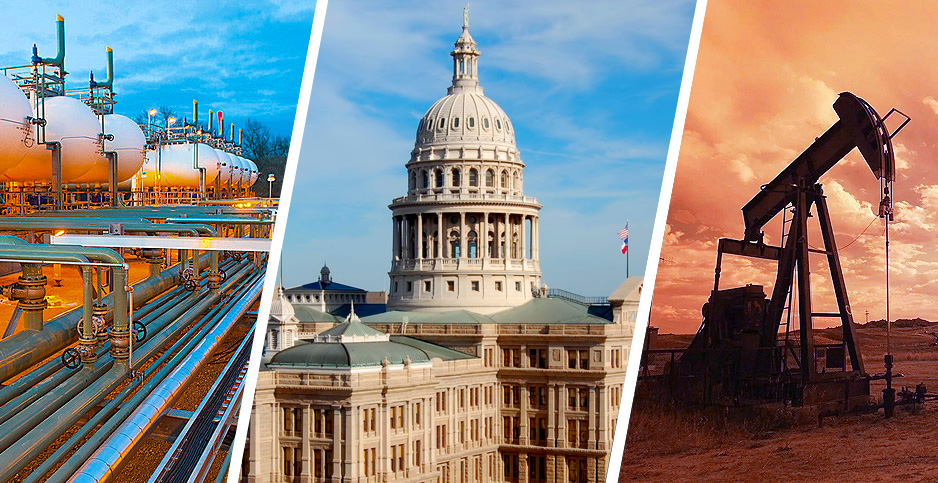 Many state election outcomes next week could be pivotal for the oil and gas industry. Pipelines, the Texas Capitol and an oil pumpjack are pictured. Bilfinger SE/Flickr(pipelines); LoneStarMike/Wikipedia(Texas Capitol); skeeze/pixabay(pump jack)

As President Trump and Democratic nominee Joe Biden argue about how their policies would change the future of the oil industry, a handful of states are set to hold elections next week that could do as much or more to shape the nation’s energy future, analysts say.

Democrats see opportunities to win regulatory and legislative races in key energy-producing states, particularly Texas and Pennsylvania. Underscoring the point, Democratic super-donor Mike Bloomberg gave $2.6 million this month to the Democrat running for a closely watched seat on the commission that oversees the Texas oil and gas industry.

Trump made domestic oil and gas production the centerpiece of his administration, but many of his plans, such as rolling back environmental regulations, have been blocked in court. Biden promised at last week’s presidential debate to move the country off fossil fuels over a period of years, but much of his plan would require congressional approval.

"There’s going to be no federal policy, they’ll be debating it for at least the next few years," Tom Sanzillo, finance director at the Institute for Energy Economics and Financial Analysis, said about the impact of next week’s presidential election. "The real work is at the state and local level."

Observers say that many state election outcomes not only could be more immediately pivotal to industry than federal policy, but the impact of the presidential election, particularly if Biden wins, will fall on just a few energy-producing states.

Here’s a look at four state fights to watch next week that could sway the U.S. oil and gas industry:

Bloomberg and a regulator fight

The oddly named Railroad Commission oversees oil and gas production in Texas, making it one of the most important state regulators in the country. The three commissioners serve six-year terms, with one member elected every two years.

Chrysta Castañeda, the Democrat in the race for this year’s only open seat, raised $3.7 million in the most recent reporting period, including $2.6 million from Bloomberg. The cash has allowed her to run ads statewide.

"Mike Bloomberg’s committed to the environment, and this is the most important environmental race in the country," Castañeda said in an interview.

If Castañeda wins, it would be a symbolic victory for the Democrats, who haven’t won a statewide election in more than 20 years, and it could lead to long-term policy changes on the three-member commission.

The Republican candidate, Jim Wright, beat the incumbent commissioner, Ryan Sitton, in the GOP primary. He’s had to deal with lawsuits accusing him of fraud in an oil field business (Energywire, Sept. 15).

Castañeda, a trial lawyer who specializes in oil and gas law, wants the commission to crack down on natural gas flaring in the oil field. The three-member commission has never turned down a permit to flare gas, but Castañeda could become part of a majority on the commission that opposes the idea.

One of the incumbent commissioners, Wayne Christian, a Republican, has been critical of gas flaring, although he’s backed away from specific enforcement actions (Energywire, Oct. 23, 2019).

Wright raised $689,000 in the most recent reporting period, including two contributions totaling $62,500 from the Texas Oil and Gas Association’s Good Government Committee.

"Texans know the value of having a strong oil and gas economy that helps provide millions of jobs for Texas citizens," Wright said in a statement. "They don’t need failed politicians from New York telling them how to vote."

Texas’ wave of voter turnout, driven in part by young, Black and Latino voters, could carry down to the state Legislature.

About 7.4 million people have cast early ballots, about 82% of the total turnout in 2016 — with a week left before Election Day, according to the U.S. Elections Project, a tracking system run by the University of Florida.

Republicans have controlled both chambers of the Legislature since 2003. But Democrats picked up several Statehouse seats in 2018 and need nine more to take control of the lower chamber. Polls show Trump with a narrow lead over Biden statewide, but Biden is popular in suburban areas where Democrats made their gains in 2018.

A Democratic win of the state House of Representatives could have long-lasting implications.

"You would definitely see the Democrats having a seat at the table instead of being on the menu," said Brandon Rottinghaus, a political science professor at the University of Houston who watches Texas politics.

If they gain control of the House, Democrats would be able to negotiate from strength on energy policy — and block legislation that they see as too pro-industry in some cases. They would also have a say in redistricting Texas’ congressional districts. Currently, Republicans hold 22 of the 36 seats in the U.S. House, and Texas is expected to gain at least two more because of population growth.

Republicans have used their muscle in the Legislature to protect the oil and gas industry. When voters in the small city of Denton passed a referendum in 2014 banning hydraulic fracturing, for example, lawmakers overrode it with a state law that prevents any city from banning fracking (Energywire, April 20, 2015).

After a string of protests at pipeline sites around the country, the Texas Legislature passed a law last year imposing stiff prison terms for anyone who interferes with energy infrastructure (Energywire, Feb. 24).

Pennsylvania’s government has been divided between Democratic Gov. Tom Wolf and the Republican-controlled Legislature since Wolf was elected in 2014.

Biden is leading in the polls, and early voting is surging in Democratic strongholds like Philadelphia. Early voting shows Democrats with a 3-to-1 advantage over Republicans, according to the U.S. Elections Project. That could give Democrats a chance at capturing either the state House or Senate, said Terry Madonna, who runs the Franklin & Marshall College poll.

That, in turn, would give Wolf more legislative support in his push to control climate-warming emissions from the gas industry and to pass a severance tax on gas production. The GOP-controlled Legislature has voted down Wolf’s gas tax proposal every year since he took office (Energywire, Feb. 18). Pennsylvania is the only major gas-producing state without a tax on production. Instead, the state collects an annual fee on each well, with most of the money going to local communities affected by drilling.

Wolf’s administration is pushing to limit the methane emissions from the state’s natural gas industry and has advanced a plan to join a cap-and-trade program with other states, known as the Regional Greenhouse Gas Initiative, to reduce emissions from electric power plants (Energywire, Sept. 16). Republicans in the Legislature have pushed back against the methane regulations.

Polls last week showed the presidential race tightening in Pennsylvania, though. A poll yesterday by InsiderAdvantage showed Trump ahead of Biden by 2 points in Pennsylvania, for example. And, Madonna said, Democrats already picked up several seats in the 2018 midterms and may not be able to expand any further.

"I’m not saying [it’s] impossible," he said. "I’ve learned when you’re dealing with the Legislature it’s not always easy."

Biden’s pledge to stop fracking on federal property wouldn’t do much to slow down overall U.S. oil production, because most drilling happens on private property. But it could have an outsize effect on states like New Mexico and North Dakota.

New Mexico, the third biggest oil-producing state, gets about half its oil production from federal land, mostly in the Permian Basin. Most of its production growth has come from the boom in hydraulic fracturing, the formal name for fracking.

So far, Biden hasn’t been clear on whether he’d stop leasing property for fracking or whether he’d stop issuing permits for individual oil and gas wells, said Robert McEntyre, a spokesman for the New Mexico Oil and Gas Association.

"A ban on permitting would bring activity on federal lands essentially to a halt," McEntyre said.

A ban on new leases would also slow down oil production in New Mexico but would take longer to become effective. Federal oil and gas leases typically give a company several years to begin drilling wells. And most leases cover hundreds of acres, allowing companies to drill multiple wells.

In North Dakota, state officials are seeing a rush to drill on the Fort Berthold Indian Reservation, because of the potential for a change in federal drilling policy.

The reservation produces more than 20% of the oil in the Bakken Shale field, and parts of it are overseen by the Bureau of Indian Affairs as a trustee for the Mandan, Hidatsa and Arikara tribes.

"Everyone who has a federal permit in hand is drilling a well while the drilling is good," state Department of Mineral Resources Director Lynn Helms said on an Oct. 16 conference call.