4 fights to watch as energy, environment bills get votes 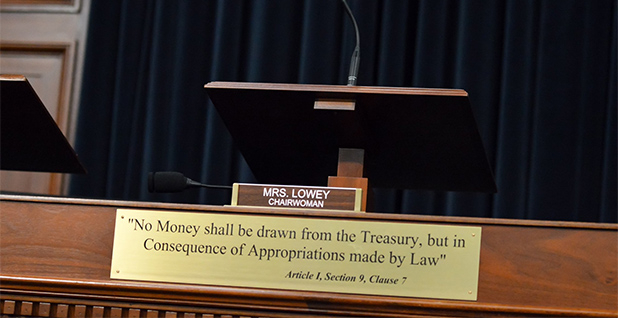 House Republican appropriators are poised to push back against Democratic spending bills this week that would reorder the Trump administration’s energy and environmental priorities.

The House Appropriations Committee will mark up the fiscal 2020 Energy and Water spending bill tomorrow, followed Wednesday by the Interior-EPA bill. Both measures are expected on the House floor in June.

While lawmakers held their fire on amendments at the subcommittee level, they are expected to offer plenty of proposed changes this week.

Democrats are likely to fend off GOP attempts to reverse large hikes in EPA spending or limit offshore and Arctic drilling.

The parties could also reach compromises on Everglades spending levels and a path ahead for nuclear waste disposal.

The decades-old fight over nuclear waste will flare up this week, after Democrats left out any funding to continue the licensing process for the planned federal repository at Yucca Mountain in Nevada.

That’s a reversal from the GOP-led House in recent years, which consistently included money to revive the Nuclear Regulatory Commission’s review of the application for Yucca, which has been mothballed since the Obama administration announced plans to cancel it in 2010.

Rep. Mike Simpson (R-Idaho), the former Energy and Water Development Subcommittee chairman and an ardent Yucca supporter, said the impasse will be a top priority for Republicans.

"Gee, I wonder," he said sarcastically to reporters last week when asked if GOP appropriators would have Yucca amendments.

The full committee is the best shot for Yucca backers, given uncertainty about timing and the amendment process for floor debate.

Pointing to data from the Nuclear Energy Institute, Yucca supporters note that 48 of the panel’s 53 members have nuclear waste in their home states.

Kaptur told E&E News last week that she anticipates a "big discussion" on nuclear waste during the full committee markup (E&E Daily, May 16).

The underlying bill contains funds for studies of interim storage facilities but does not authorize DOE to initiate temporary sites.

Sen. Lamar Alexander (R-Tenn.), a longtime nuclear ally and chairman of the Senate Energy and Water Development Appropriations Subcommittee, said last week that he expects this year’s bill will again include a provision to authorize a limited DOE interim storage program.

"I’m also hoping to have a vote on the floor to determine if Yucca Mountain is safe or not so we can resolve that issue," he told E&E News.

On Friday, Republicans on the House Energy and Commerce Committee released a letter from a broad coalition of labor unions, energy trade groups, state regulators and local government officials pleading for them to take action on nuclear waste.

"Another year without progress on the Yucca Mountain repository license application and consolidated interim storage is untenable," states the letter to House and Senate leaders.

There will be discussion and likely amendments about shifting Army Corps of Engineers funding around, as well as a Democratic provision to block the president from tapping Army Corps funds to build a border wall with Mexico.

The White House threw a monkey wrench into appropriators’ laps last week with the submission of a last-minute budget amendment that ups the administration’s request for Everglades restoration funding from $63 million to $200 million — fulfilling a Trump promise made during a Florida visit in March (E&E Daily, May 14).

That was music to the ears of the Florida delegation, which had pressed both President Trump and top appropriators for $200 million to match state funding for joint restoration efforts.

She promised more discussion of the matter during this week’s full committee markup, but an amendment to increase the appropriation would likely have to cut funding elsewhere in the bill.

Kaptur said committee leaders are "very aware" of the White House’s request. "Presidents have a very high learning curve," she said. "They need the Appropriations Committee. And we look forward to addressing that when we move to full committee."

"I would say this, it’s not the president’s learning curve, it’s more Mick Mulvaney’s learning curve," he said of the acting White House chief of staff and official head of the Office of Management and Budget, with whom he has repeatedly clashed over spending decisions. The room erupted into laughter.

Democrats’ decision to include language in the bill that protects Army Corps’ funds from being diverted to build Trump’s border wall will be a flashpoint.

"That may be a poison pill for some Republicans," Simpson told E&E News after the markup. "It doesn’t bother me because I don’t want them taking Army Corps money to build the wall anyway, so we’ll see. I suspect there will be an amendment to take that language out, and then we’ll have another discussion on the border wall."

Republicans are likely to push back against Democrats’ plan to boost EPA spending next year by more than $700 million to $9.5 billion.

Appropriations Committee ranking member Kay Granger (R-Texas) said the increases for EPA and Interior "were not justified" given the $22 trillion debt.

Republicans are expected to offer an amendment, like those they have offered at other spending bill markups, that would seek to cut the bill’s overall top line.

"We think we are marking up to imaginary numbers that are probably too high in the nondefense areas and too low in the defense areas," said senior appropriator Rep. Tom Cole (R-Okla.), who warned Democrats are promising money that won’t survive negotiations with the Senate.

Republicans also could force votes to try to curtail specific increases for Democratic priorities. For example, the GOP has long criticized EPA’s regulatory reach and may fight a $40 million hike for compliance and enforcement, as well as a 47% increase for environmental justice.

Democrats were careful in directing some of the large EPA increases for programs that generally have bipartisan support, including large various state water and other grants assistance. Those efforts might not be targeted by the GOP amendments.

Aside from EPA increases, Democrats removed nearly all the riders Republicans have added in recent years aimed at blocking Obama-era environmental regulation.

Republicans might propose largely symbolic amendments aimed at renewing them, which Democrats would have the votes to block.

At the subcommittee markup, Rep. David Joyce (R-Ohio) called the bill a "step backward on conventional energy" and said renewable energy is "not ready" to tackle the country’s needs alone.

The Democrat’s proposed legislation would deny funding to auction leases for drilling in the Arctic National Wildlife Refuge if bidding doesn’t generate at least half the $1 billion in anticipated federal revenue.

Early lease sales have fallen short of revenue expectations, and the bill language could prevent leasing.

Republicans could try to alter that formula or block the language in its entirety.

Another GOP target could be new and expanded inspection fees Democrats are proposing for outer continental shelf drilling operations.

Democrats also want to block any efforts at expanding offshore drilling by denying funding for new leases until Interior publishes a comprehensive plan.

The GOP might simply opt to ignore the issue with Interior already delaying the plan amid several, ongoing legal challenges that could last years.

Schedule: The House Appropriations Committee markup of the Defense and Energy-Water bills is Tuesday, May 21, at 10:30 a.m. in 2359 Rayburn.

Schedule: The House Appropriations Committee markup of the Interior-EPA and Commerce-Justice-Science bills is Wednesday, May 22, at 10:30 a.m. in 2359 Rayburn.