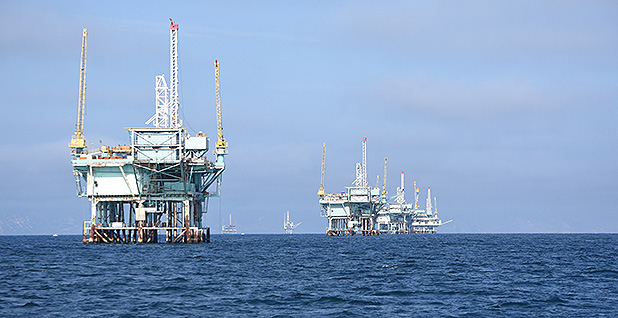 The Trump administration has proposed opening the Eastern Seaboard to oil and gas platforms, like these in the Pacific Ocean. But most East Coast governors -- and many of their opponents in upcoming elections -- want their states' coastlines to remain closed to energy exploration and development. Greg Sanders/Bureau of Ocean Energy Management

Gubernatorial candidates in four key East Coast primaries are asking the Trump administration to let go of its dreams of drilling for oil and gas off their states’ coasts.

After the Bureau of Ocean Energy Management released its proposal to hold lease sales in more than 90 percent of the U.S. outer continental shelf between 2019 and 2024, all but two East and West coast governors called on Interior Secretary Ryan Zinke to exempt their states from the plan (Energywire, Jan. 18). Zinke controversially excused Florida from the five-year leasing program — although it’s unclear which Sunshine State waters will actually remain "off the table" for new drilling — but has so far avoided excluding other states.

Some candidates in the races to lead Georgia, Florida, South Carolina and Maine have indicated that they would take up the bipartisan battle against expanding U.S. offshore drilling beyond the Gulf of Mexico.

"President Trump and his actions in office will cast a shadow over most of the races in this election cycle," said Nathan Gonzales, editor and publisher of Inside Elections, which offers nonpartisan campaign analysis.

The president’s party typically suffers in midterm elections when voters are displeased with the chief executive’s policies, he said. Republican candidates will be looking for opportunities to differentiate themselves from the White House.

"Trump isn’t on the ballot, but his actions are," Gonzales said.

Here’s how the offshore debate is playing out in four East Coast gubernatorial races:

Reason to watch: Unlike other governors on the West and East coasts, Deal has kept quiet about his views on the Trump administration’s offshore plan.

Environmental groups largely stayed away from pressing candidates about their position on offshore drilling before Georgia’s primary, held last week. The issue will be included in an upcoming questionnaire, however.

"I think the bottom line is, for our coast, we need a governor who is not going to avoid this question," said Jennette Gayer, state director of Environment Georgia. "We need someone who is not afraid of standing up and saying, ‘We do not want this for our coast.’"

They may have an uphill battle in getting the candidates to talk about the issue. The governor’s race right now is focused squarely on taxes, jobs, education, and law and order. And Georgia is in the national news for other reasons: State House Minority Leader Stacey Abrams won the Democratic Party’s nomination, putting her on track to be the first black female governor in the United States.

Abrams’ campaign website talks about energy in the form of creating advanced energy jobs, making the debate about improving the state’s economy instead of about climate change, a polarizing term in what is still a very red state.

On the GOP side, Lt. Gov. Casey Cagle and Georgia Secretary of State Brian Kemp are headed for a runoff. Cagle mentions the Port of Savannah — a contributor to the state’s economic development — on his website, but neither he nor Kemp has widely discussed their opinions on drilling issues.

Savannah and other coastal communities are vulnerable to sea-level rise and other environmental changes.

A January forum in Savannah showed most of the then-GOP candidates echoing Deal’s noncommittal stance on the proposed offshore leasing strategy. Just one contender, state Sen. Michael Williams, definitively answered a question about whether Georgia should be exempt from any federal offshore drilling plans.

"I absolutely support offshore drilling," Williams said, according to a Jan. 20 report from the Atlanta Journal-Constitution‘s politics newsletter. "For over 30 years, Republicans have fought for offshore drilling. We now have a president, in President Trump, who is willing to fight for that. We have the opportunity to become a world leader in energy."

Reason to watch: A January meeting between Scott and Zinke resulted in Florida’s waters being taken "off the table" for new oil and gas drilling.

Scott last month announced his bid to unseat Sen. Bill Nelson (D), adding fuel to suspicions that Zinke’s removal of the state from the five-year plan was actually an effort to stoke Scott’s Senate run.

The exemption puzzled many energy experts, who saw the eastern Gulf of Mexico, which is under a drilling moratorium until 2022, as an obvious launch pad for the offshore chapter of Trump’s "energy dominance" agenda. Zinke has declined to specify whether that section of ocean, which is located off Florida’s western coast, would remain off-limits to oil and gas developers after the moratorium expires.

Between Florida’s beaches, pristine coast and the Everglades, protecting the state’s environment is almost always a chief campaign issue for both parties. The debate lies in sea-level rise and other climate change issues, especially as intense hurricanes are starting to come more frequently.

The Democrats who are lining up to replace Scott as governor come from all areas of Florida. They include Miami Beach Mayor Philip Levine, who has made a name for himself and the city by making an issue of sea-level rise and actively taking steps to make the coastal city more resilient.

All of the candidates mention climate change on their campaign websites, with some using it to attack Trump, Scott or both.

"For spending so much time in Florida, Donald Trump sure does like to ruin the Sunshine State," said Tallahassee Mayor Andrew Gillum.

"Offshore drilling is an extraordinary danger to our environment & economy, and Gov. Scott should never have played politics with our coastlines and offshore drilling. I’ll put a stop to both the drilling and the games when I’m governor," Gillum said in a statement.

Florida’s energy office is a part of the state’s agriculture commission, but Republican Agriculture Commissioner Adam Putnam’s "Florida Families First" agenda and other campaign issues are tied to gun rights, immigration reform, religious freedom and education. Putnam backs an "all of the above" energy strategy but vowed to keep Florida out of any offshore drilling proposals, he said in a statement to E&E News.

"I’m committed to protecting Florida’s sensitive shorelines, supporting our record-breaking tourism industry and not putting our military training missions in the eastern Gulf at risk," Putnam said, also touting the millions of jobs tied to the state’s beaches. A recent Pentagon report determined that new drilling in the eastern Gulf of Mexico could "severely" affect military operations (Greenwire, May 11).

Reason to watch: South Carolina is among the states touched by a section of ocean that Zinke has identified as a potential gas play.

McMaster, who is vying to keep his post, has opposed drilling off his state’s 187-mile coastline out of concern for how a burgeoning energy industry would clash with local tourism and fishing operations.

"Simply put: our coastline is not an industrial working coastline as in some other states," McMaster wrote in a Jan. 16 letter to Zinke. "It is just the opposite."

His fellow Republicans, however, have expressed limited support for the Trump administration’s offshore proposal. The GOP is expected to maintain its hold on the South Carolina governor’s mansion, according to analysis from The Cook Political Report and other election watchers.

Earlier this year, Zinke indicated that he saw potential for natural gas development in the Mid-Atlantic region (Energywire, April 16). He appeared to be referring to a stretch of ocean between Florida’s northern border and Maryland’s southern limit, where the Obama administration had previously proposed lease sales in an early draft of its 2017-2022 program.

"Let’s find out what we have," Lt. Gov. Kevin Bryant (R) said in a televised interview with C-SPAN’s "Washington Journal." "At this point, experts think that we probably have a significant amount of natural gas off of our coast, yet there are some that oppose the exploration.

"I would like to explore what we have and find out where it is, and then we can make a fully informed decision on whether we are to drill or not."

McMaster’s Democratic challengers are united in their opposition of the federal offshore plan.

Attorney Marguerite Willis and state Rep. James Smith said drilling is inconsistent with the way the state has developed its coastline and pledged to wield their respective expertise against Trump’s plan. Willis said she would be party to any lawsuit to block drilling in South Carolina’s waters, and Smith said he would work with the state’s delegation on the issue.

Phil Noble, a business and technology consultant who will also compete in the June 12 primary, has also opposed the offshore proposal.

Reason to watch: LePage was the only non-Gulf state coastal governor to support the proposed five-year plan.

In April, Maine Rep. Chellie Pingree (D) invited Zinke to sit down with her state’s next governor to discuss offshore drilling.

LePage was the only coastal governor outside the Gulf states to explicitly support the Trump administration’s offshore leasing proposal. Due to term limits, LePage is not eligible to run again.

"If we’re all on the same page, maybe you can meet with us," Pingree said in an exchange with Zinke on Capitol Hill, noting that Maine’s entire congressional delegation opposes the proposed five-year plan (Energywire, April 12). "We’ll have everyone aligned, and you can say, ‘Oh, Maine shouldn’t have this either.’"

LePage will almost certainly be replaced by a governor who opposes the plan.

All of the Democratic candidates spoke out early against the leasing proposal and prodded the Republican roster to do the same.

"What Maine needs right now is a governor who’s willing to stand up to this backwards plan by telling the Trump Administration to stay away from our coastal waters," Maine Democratic Party Chairman Phil Bartlett said in a statement. "But instead of doing that, the Republicans are either shying away from speaking up or suggesting it’s worth thinking about. Both of those are wrong, they’re dangerous, and they put allegiance to President Trump and Governor LePage ahead of the best interests of Maine people."

During an early April primary debate, three of the four Republican candidates said they did not support or were not sure that the state should allow offshore drilling.

"Worth exploring," she said in response to the lightning-round question.

But Maine’s next governor may not have to worry about drilling rigs off the Pine Tree State’s coast.

The next draft of the plan is expected this fall.