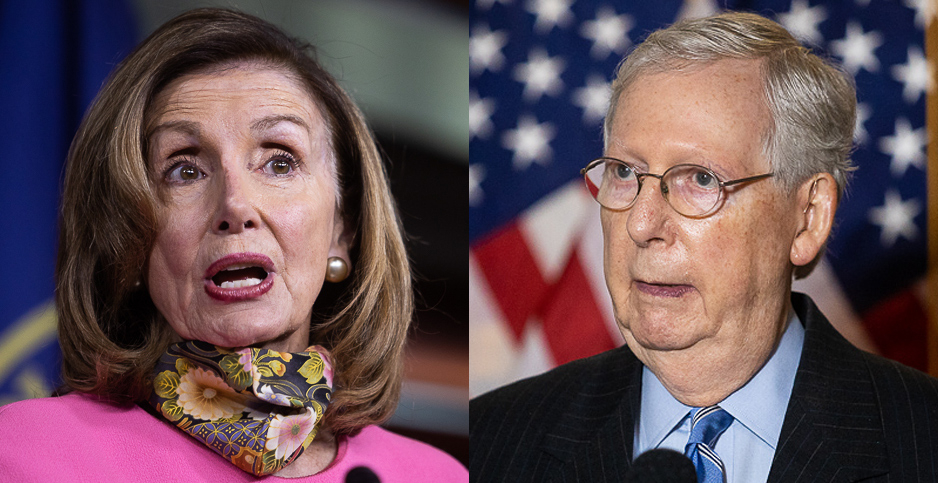 The House and Senate are officially on August break, but lawmakers are keeping one eye on the Capitol for answers to a most pressing question: Who blinks first on pandemic relief?

After two months of rare bipartisan unity that poured trillions of dollars into the U.S. economy to help stem the fallout of COVID-19, the prospects for additional stimulus are on ice until Congress reconvenes in September.

The current outlook for a deal is bleak, with the White House and Democratic leaders barely speaking even as the virus continues to spread and schools and businesses continue to grapple with how to reopen safely.

On Capitol Hill, party leaders spent the past two weeks bashing one another for the standoff on a new package in unusually personal terms.

"Perhaps you mistook them for somebody who gave a damn — that isn’t the case," Speaker Nancy Pelosi (D-Calif.) told reporters last week of Republicans.

"That’s not negotiating — that’s throwing spaghetti at the wall to see what sticks," he said of Pelosi and Senate Minority Leader Chuck Schumer’s (D-N.Y.) offer to shrink the cost of the package by $1 trillion from more than $3 trillion.

Left hanging in the balance is hundreds of billions of dollars in emergency aid to states and local governments, enhanced jobless benefits, small-business assistance, as well as more funding to fight the spread of COVID-19 itself.

But there’s also growing bipartisan sentiment that the current impasse is unsustainable. Here are four issues to watch for signs of a thaw that could lead to a resumption of negotiations.

That could help open the door for major cash infusions for key federal agencies and adjustments to clean energy tax breaks to help companies and workers weather the pandemic’s fallout.

Trump’s move — which capped a threat repeatedly invoked by White House chief of staff Mark Meadows in negotiations with Pelosi and Schumer — was widely seen as providing political cover to Republicans, who blamed Democrats for being unyielding in their demands.

But that cover may be short-lived if, as Democrats and many observers have noted, Trump’s orders prove to be "so unserious in terms of meeting the large needs of America as to be pathetic," as Schumer called them last week.

For starters, Trump’s decision to defer the collection of payroll taxes through the end of the year has sparked widespread uncertainty among business interests.

The U.S. Chamber of Commerce, for instance, outlined "serious concerns" with the proposal last week, including "uncertainty as to who is ultimately liable for the repayment of the deferred taxes, and when the repayment will be due and what mechanism will be used to collect that repayment."

Furthermore, Trump’s insistence that he will ask Congress to forgive any debt associated with the deferment and "terminate" the tax opens Republicans to accusations they’re cutting Social Security and Medicare — both of which are funded by payroll taxes and long a political third rail, especially in an election year.

Additionally, Trump’s efforts to extend — and cut — enhanced unemployment benefits are proving messy to implement, while his order to extend a federal eviction moratorium merely directs several federal agencies to study whether such a move is necessary.

Should the orders prove ineffective, that’s likely to increase pressure on the White House to get back to the negotiating table.

Republicans’ hands in the negotiations have been stymied by internal divisions, with McConnell estimating that there’s 20 GOP senators who will not support any additional pandemic relief following the earlier spending binges.

But with control of the Senate also on the ballot in November, there are plenty of Republicans in tough reelection fights who desperately want to see a relief deal materialize.

And some of those lawmakers are already showing signs of splitting with the president on another area on the table in the negotiations: an infusion of billions of dollars to help the Postal Service address ongoing delivery delays.

Democrats charge that Trump is attempting to hamstring the Postal Service in an effort to steal the election — an accusation that the president appeared to confirm last week, when he told Fox News that he opposed the $25 billion Democrats are pushing in relief talks.

"Now they need that money in order to make the post office work so it can take all of these millions and millions of ballots," said Trump, who has railed for weeks against mail-in voting. "But if they don’t get those two items, that means you can’t have universal mail-in voting because they’re not equipped to have it."

Additionally, House Minority Leader Kevin McCarthy (R-Calif.) — a close Trump ally — said Friday that the post office "will have the funding that it needs."

"We will make sure of that," McCarthy said on CNBC. "We want to make sure we have an accurate election."

Observers are also closely watching for any signs that the administration is willing to go beyond the $1 trillion price tag of Senate Republicans’ latest pandemic proposal, the "Health, Economic Assistance, Liability Protection and Schools (HEALS) Act" (E&E Daily, July 28).

Democrats, who are using the $3 trillion "Heroes Act" that passed the House in May as their own blueprint in negotiations, were rebuffed by the administration when they offered to "split the difference" and settle at $2 trillion.

So far neither side is showing any public signs of budging.

Pelosi told Treasury Secretary Steven Mnuchin last week that the White House has to put more money on the table. "When they are ready to do that, we will sit down," she told reporters Thursday.

But National Economic Council Director Larry Kudlow told reporters that same day that the White House will not accede to the $2 trillion sought by Democrats.

"There are too many things, too many asks on their side that don’t fit, don’t even have anything to do with COVID-19 for that matter," he said.

Hanging in the balance is a potential windfall for federal agencies to cope with COVID-19’s fallout.

House Democrats have loaded up this year’s spending bills with hundreds of billions of dollars in emergency spending for federal agencies, including the Department of Energy, which would see a $25 billion boost in its House-passed appropriations bill (E&E Daily, July 9).

While the House’s bonus funding is highly unlikely to make it into law, an agreement to boost spending would open the door to negotiations on emergency funding for agencies, which would see $305 billion in emergency appropriations — including $307 million for DOE — under the Senate Republican plan.

That could also be a boost for the Low Income Home Energy Assistance Program — which would see $1.5 billion under both the Senate GOP plan and the House-passed "Heroes Act."

Republicans have been skeptical of Democratic overtures to extend and overhaul key clean energy tax credits in response to the pandemic — including the sweeping clean energy tax package that passed the House last month as part of a $1.5 trillion infrastructure package (E&E Daily, July 21).

But there’s bipartisan sentiment growing in both chambers for making some incentives refundable or converting them to direct payments to provide some relief from the freeze in tax equity markets that is making it difficult to finance projects.

Its prospects are far from clear, but a bill, H.R. 7734, introduced last month by Rep. Jodey Arrington (R-Texas) and backed by powerful business interests, would allow a number of general business credits — including the crucial renewable production and investment tax credits — to be monetized for tax years 2019 and 2020.

Arrington argues that doing so would provide liquidity for companies by advancing payment for credits they are already entitled to.

The push could get a boost by a Joint Committee on Taxation estimate from earlier this month, which told Sen. John Cornyn (R-Texas) that Arrington’s bill would add $3.3 billion to the deficit over 10 years — a relatively minor cost in a multitrillion-dollar negotiation and one that dwarfs the deficit impacts of past broader tax proposals, which have been estimated to cost tens of billions of dollars.