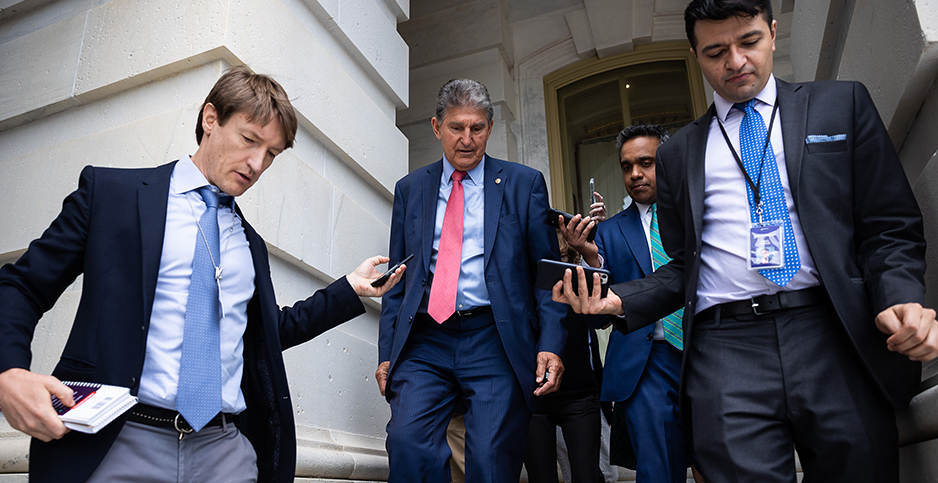 It is also widely seen as a potential piece of the broader $1 trillion infrastructure agreement backed by a group of 21 bipartisan senators last week.

President Biden met with Manchin and Sen. Kyrsten Sinema (D-Ariz.) at the White House yesterday to discuss the matter.

But the scope of the bill, which is set for a hearing Thursday before the Energy and Natural Resources Committee that Manchin chairs, is much broader.

It would infuse tens of billions of federal funds into efforts like fortifying fragile grids, bolstering supply chains for critical minerals and ramping up energy efficiency efforts.

Here are some provisions to watch:

Beefing up the grid

As a heat wave bore down on much of the West last week, utilities across Texas and California pleaded with customers to limit their energy use as demand from air-conditioning units and other energy sources reached near capacity.

Both states’ grids avoided catastrophe, but such actions are becoming more commonplace as the electric grid struggles to keep up with the stresses of increasingly extreme weather.

Known as demand response, states have increasingly adopted policy models that would reward customers who meet those calls for reduced demand to help the grid when it is most stressed, be it through reduced rates or other financial incentives.

Manchin’s bill would direct every state utility commission, including those in regulated markets, within the year of enactment to consider such demand response standard policies and make a decision on their effectiveness for each state.

States would have two years to decide if such policies should be enacted into its regulations.

On top of the tens of billions of dollars reserved for grid improvements, the bill would also seek to make the permitting and siting of transmission infrastructure easier for project developers.

Transmission policy has become a popular policy lever identified for needed reform for states to meet their clean energy goals. Multiple studies have determined that a multibillion-dollar build-out of transmission is needed to fully unleash renewable energy on the grid.

The proposal would direct the Federal Energy Regulatory Commission to reassess its transmission policies and identify ways to improve the process.

It would also amend the Federal Power Act to make it easier for DOE to identify regionally significant transmission corridors that would streamline the approval process for some permits.

Similar provisions have popped up in climate change bills from House Democrats.

The legislation proposes a range of measures meant to bolster supply chains for batteries used in electric vehicles and grid storage.

President Biden’s goal to build out a domestic EV supply chain to compete with China’s dominance of the sector has garnered bipartisan support.

Manchin’s bill would do that to the tune of $6 billion. It would create two $3 billion grant programs in the Energy Department: one for processing critical minerals and another for manufacturing and recycling batteries.

The Battery Materials & Technology Coalition, a group of miners and processors that has lobbied for a similar $10 billion federal investment, praised the measures.

"There is a lot of room for Democrats and Republicans to work together on manufacturing and production of batteries," spokesperson Ben Steinberg told E&E News. "We are hopeful that the Senate and House will work together on companion legislation at a higher mark, at the $10 billion mark."

The bill would also task the Energy Department with creating a $140 million "rare earth demonstration facility." The refinery would attempt to show the feasibility of using acid mine drainage, a major source of pollution, as feedstock for extracting rare earths.

Some rare earth elements are key components of magnets used in electric vehicles, and China also dominates their production.

Through a combination of rebates and grant programs, the provisions would help reduce the emission profile of buildings that make up approximately 40% of all energy use.

Central to that effort is a $3.5 billion infusion to DOE’s Weatherization Assistance Program, which helps low-income households improve their homes with efficiency retrofits.

Such provisions have come as energy efficiency advocates have argued that infrastructure spending on efficiency policy could yield savings totaling $300 million for ratepayers.

In a report released this morning from the American Council for an Energy-Efficient Economy analyzing 10 of the efficiency proposals and tax breaks floating around the infrastructure negotiations, efficiency spending could spur "3.9 million jobs over time (measured in job-years), with about 400,000 jobs added for several years this decade," ACEEE said.

"The decisions our leaders make now are going to affect a whole generation of buildings, vehicles and industrial plants," said Steven Nadel, executive director of ACEEE. "We have an opportunity to make transformative investments in our future, and we should seize it."

The agency has come under fire in recent years for being too conservative in their modeling for how quickly clean energy could penetrate and transform the grid.

"The EIA has consistently and, actually, spectacularly, underestimated growth in clean energy as well as growth in the gas sector," said Sen. Martin Heinrich (D-N.M.) during a 2017 hearing.

Manchin’s bill would direct new information-gathering and reporting duties for EIA to include updates on critical mineral supplies, household energy burdens and other policies related to the broad energy shift underway to meet carbon reduction goals.

The bill would also direct updates to how the agency conducts its online database to track the operation of the bulk power system and update the data set to include hourly snapshots of how grid operators are deploying generation on the grid.

The changes pitched in the bill would in effect update EIA’s information goals to track the electric sector’s climate change-inspired transition.