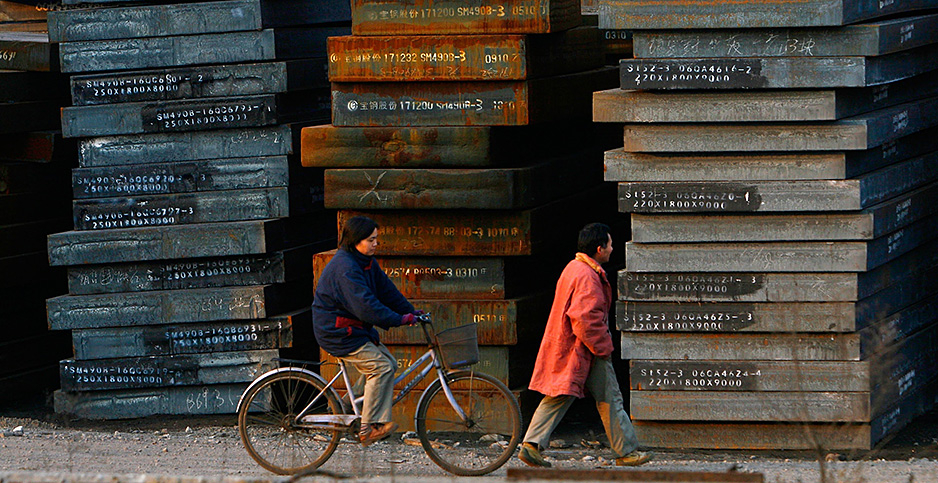 A group of Republican senators is showing interest in an obscure carbon pricing strategy that could benefit U.S. businesses by levying climate-related fees on foreign competitors.

A border carbon adjustment is being discussed among moderate lawmakers as a policy that might soften the Republican Party’s perceived antagonism toward climate action without mandating new costs or regulations on American industry, according to two people close to the discussions.

The carbon pricing plan would assign fees to foreign manufacturers of carbon-intensive goods that enter the United States, while providing rebates to American companies that export products with a lower emissions profile.

The idea is being explored by at least four Republican senators who view carbon border adjustments as potentially viable because they would challenge China economically, the sources said. The group includes Sens. Lisa Murkowski of Alaska, Mike Braun of Indiana, Mitt Romney of Utah and Susan Collins of Maine, one of the sources said.

The group is in discussions about the idea but has not put together a proposal. The conversations are noteworthy because it’s rare for Republicans to express support for carbon pricing.

"It’s a good entry point for this policy," one source close to the discussions said.

The Biden administration has also signaled interest in border adjustments. Climate envoy John Kerry has hinted that the administration will seriously consider one in the lead-up to international climate talks in Scotland later this year. Some of the United States’ closest allies in Europe are already moving forward with a similar mechanism.

At least 25% of global greenhouse gases stem from international trade, said Catrina Rorke, vice president of policy for the Climate Leadership Council. A border adjustment for carbon emissions could integrate trade and climate policy in a way that rewards U.S. manufacturers, she said.

"We’re giving ourselves a competitive advantage against our international competitors by moving forward on climate policy," Rorke said. "That sounds like a game changer to me."

Many of the goods that dominate international trade are economic pillars for the countries that buy and sell them. They’re also carbon-intensive. That includes metals, glass, pulp and paper, cement and more. Lowering the emissions associated with those products could help the United States decarbonize its economy, observers said.

It would also bring the United States in line with two of its primary trading partners. The European Union and Canada are exploring their own border carbon mechanisms, with the European Union expected to unveil the details of its plan in the coming weeks.

It would come months ahead of international climate talks in Glasgow, where the United States is expected to announce significant climate policies to help it halve emissions by 2030.

When it comes to climate policy, the interests of Republicans and Democrats rarely intersect. Carbon border adjustments might be an exception. The U.S. manufacturing sector generally has a lower emissions profile than similar industries overseas, where pollution enforcement is lax or nonexistent.

Part of the appeal for Republicans is that corporations are increasingly supportive of the border adjustment, said Alex Flint, executive director of the Alliance for Market Solutions. It also places pressure on China and other countries to follow through on their climate pledges, he said.

"What is emerging in the conversation, particularly among Republicans, is that this could be a way to induce climate action globally with a higher degree of certainty than the voluntary commitments being made pursuant to the Paris Agreement," Flint said. "That appeals to Republicans’ desires to ensure that the U.S. doesn’t act alone."

Braun, a member of the Senate Climate Solutions Caucus, acknowledged the discussion around carbon pricing. In the past, he expressed support for carbon markets, and has cosponsored legislation to help farmers join them. Yesterday, he described one form of carbon pricing — a tax — as being out or reach, without directly addressing the political prospects of a border adjustment.

"Though there is discussion among industry stakeholders on carbon pricing, a carbon tax would currently be dead on arrival in the Senate," Braun said in a statement.

That Republicans are engaging on the issue is notable, said Adele Morris, policy director for climate and energy economics at the Brookings Institution. But she said the border adjustment is just one part of a broader climate policy that has historically been opposed by Republicans.

For a border adjustment to truly work, it would have to rely on some sort of domestic carbon pricing, she said. And while many Republicans resist the idea of a carbon tax, it may be needed if Canada and Europe start to penalize the United States for its carbon-intensive exports, she said.

"Europe and Canada are pursuing very significant prices on carbon, so unless we’re going to do something analogous, they can put that charge on our goods going into their markets," Morris said. "So be careful what you wish for in this deal."

Getting some congressional Republicans on board with a border carbon adjustment could be vital for Kerry as he expands his international climate talks, said Rorke of the Climate Leadership Council. She added that the United States needs a strong domestic position as it works with allies on a potential joint agreement over the measurement and verification of emissions by major competitors.

That’s a message Republicans can sell to their constituents, she said.

"We have a profound carbon advantage, and the advantage is extraordinarily wide with countries like China and India, Russia, countries we know are going to be slower to move on climate action," Rorke said. "The U.S. economy makes things with much fewer carbon emissions than the vast majority of our trading partners, and that carbon advantage goes unmonetized in the current trading system."