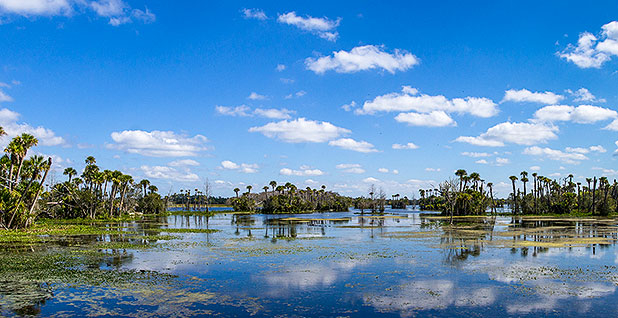 The Trump administration might have unwittingly cleared a path for a legal assault in its proposal for delaying the effective date of the contentious 2015 Clean Water Rule, experts in administrative law say.

At issue are four words in the proposal released last month by U.S. EPA and the Army Corps of Engineers aimed at delaying by two years the Obama rule defining which wetlands and waterways get protection under the Clean Water Act.

The administration said it intended to "provide clarity and consistency" to the rule, also known as Waters of the U.S., or WOTUS, rule, but the proposal it sent to the Federal Register and the one that was ultimately published don’t match.

An EPA source said the phrase "applicability date" was put into the proposal after the Federal Register insisted a new term was needed because the Clean Water Rule had already taken effect in August 2015.

So what’s the big deal? Legal experts say the word change could make the administration’s position more vulnerable to lawsuits.

"If they are doing this to avoid a legal challenge, that is incredibly foolish," Georgetown Law professor Lisa Heinzerling said. "People are going to notice, and people litigate over these things all the time."

EPA didn’t respond to questions about whether the word choice could make the regulation vulnerable to legal challenges. A spokeswoman did say the change was made during a "routine review" by the Office of the Federal Register for "consistency with Office of Federal Register submission, format, and editorial requirements."

Most regulations have "effective date," drawn from the Administrative Procedure Act, which governs the rulemaking process. Courts have ruled that the effective date for a rule cannot be changed after the regulation takes effect.

The Trump administration has learned that lesson the hard way in three cases in which courts have struck down the Department of the Interior’s efforts to postpone Obama-era oil and gas regulations (Energywire, Oct. 4).

In one Interior case on royalties, U.S. Magistrate Judge Elizabeth Laporte found the administration had attempted to "bypass the [Administrative Procedure Act] repeal process for a duly promulgated regulation" without citing any legal precedent or legislative history that would allow it to do so.

Laporte also criticized Interior for only requesting notice and comment on the proposed changed date, as opposed to the merits of and problems with the actual regulation that would have been delayed.

That ruling could become a hurdle for EPA and Army Corps in their bid to delay WOTUS, in part because the agencies’ proposal also only asks for comment on the new date, not the Clean Water Rule itself.

"They are soliciting notice, but they are saying, ‘Don’t talk to us generally about the Clean Water Rule. You can tell us if you think the delay should be longer or shorter, but not about the actual rule,’" said Georgetown Law professor William Buzbee. "It’s the same as these other cases."

Does using a new phrase, "applicability date," change the outcome for a delayed WOTUS?

"It’s using a new term, but the same rationale that would clearly flunk," Buzbee said.

Said George Washington University Law School professor Emily Hammond, "I don’t think that any court is going to look at that changed language and think it means anything other than what was originally intended — that it’s an effective date."

The agencies, she said, have left a long paper trail of their initial intent to change the effective date of WOTUS, including not just the version sent to the Federal Register but also EPA press releases announcing the proposal as an amended effective date.

"No court is going to look at the record here and say that an applicability date is different than an effective date," she said.

Cary Coglianese, director of the Penn Program on Regulation at the University of Pennsylvania Law School, noted the administration could have an uphill court fight because the proposal in the Federal Register using the term "applicability date" provides no definition for the term or justification for why it might be different from an "effective" date.

"The argument that an advocate might make is that the agencies really are playing a little fast and loose here with the concepts that even the agency itself appeared to be equating," he said. "Any subsequent argument EPA might make in court might make it appear a little disingenuous."

The Trump EPA and Army Corps decided to delay WOTUS after initially proposing a regulation to formally repeal the rule.

The agencies also have said they are proceeding with the delay to "provide clarity and consistency" as the Supreme Court considers whether challenges to WOTUS belong in federal appeals or district courts (Greenwire, Nov. 6).

The 6th U.S. Circuit Court of Appeals issued a nationwide stay on the rule a few months after it took effect in August 2015.

A Supreme Court ruling that the review belongs in district courts could void that stay, meaning WOTUS would only go into effect in 37 states, thanks to another stay order from a judge in the U.S. District Court for the District of North Dakota.

The Trump administration says the stopgap delay will give agencies time to consider a new definition for which wetlands and waterways are covered by the Clean Water Act.

But legal experts and Clean Water Rule proponents speculate that EPA and Army Corps are also pursuing the delay because their proposed repeal is taking longer than expected.

"It’s like reading tea leaves, but from their thinking, a delay could be more simple," said Larry Liebesman, a former Department of Justice attorney who is now a senior adviser with Washington water resources firm Dawson & Associates.

The agencies received 700,000 comments on the proposed repeal and will have to respond to thousands of letters with detailed comments before finalizing the regulation.

As of yesterday, the deadline for comments on the delay, about 400 comments had been posted on the Federal Register‘s website.

But if the delay is seen as an easier means for the agencies to prevent WOTUS from being implemented before the administration can replace it, they face other hurdles beyond the Federal Register wording.

Many of the administration’s critics are attacking the three-page economic analysis the agencies attached to their proposed deal in the Federal Register.

The document simultaneously argues that the agencies couldn’t calculate the economic impact of delaying implementation of WOTUS because of the ongoing Supreme Court case and that EPA and Army Corps could also rely on the economic analysis they conducted for the repeal of the regulation.

Betsy Southerland, a former EPA Office of Water official who worked on the repeal, called the analysis "incredibly confusing."

She noted that the legal uncertainties that the agencies refer to in analysis were also ongoing when the agencies proposed repealing WOTUS.

"There is a lot of crap in this three-pager," she said.

The Southern Environmental Law Center, for example, mentioned both the proposal’s wording and the economic paper in its comments on the proposal.

"If they don’t anticipate getting sued, they are smoking something in that secret phone booth," he said in a sarcastic reference to the soundproof booth installed in EPA Administrator Scott Pruitt’s office. "The only explanation is that they are desperate to do whatever they can — however legally unmoored — to prevent the Clean Water Rule from going back into effect."