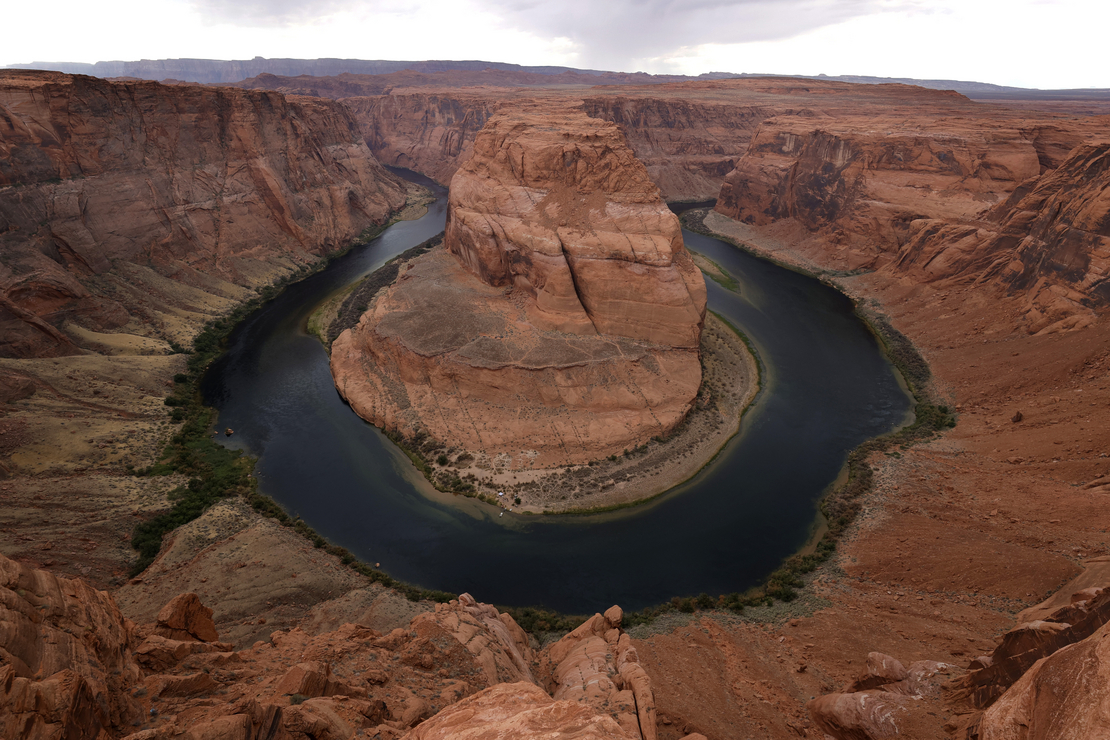 A view of the Colorado River as it flows around Horseshoe Bend in June 2021 in Page, Ariz. Justin Sullivan/Getty Images

LAS VEGAS — States in the Upper Colorado River Basin on Wednesday launched a $125 million program aimed at reducing reliance on the shirking waterway, although it remains to be seen how much water could actually be conserved.

The Upper Colorado River Commission, which represents Colorado, New Mexico, Utah and Wyoming, released details on its Upper Basin System Conservation Pilot Program, which will pay users with rights to the river’s waters to temporarily forego their allocations.

The program is part of a plan the four states announced this summer in response to demands from the Bureau of Reclamation for the seven Basin states — the Lower Basin includes Arizona, California and Nevada — to cut their use by as much as 4 million acre feet in coming months (Greenwire, July 20).

More than two decades of persistent drought across the West has decreased flows in the Colorado River, triggering shortages in major reservoirs.

The Biden administration is struggling to maintain water levels in the Lake Powell reservoir, threatening hydroelectric operations at the Glen Canyon Dam.

The Upper Colorado River’s pilot program would pay water users at least $150 per acre foot of water conserved, or about 326,000 gallons. Participants could seek a larger payout but must fill out a detailed proposal.

Upper Colorado River Commission Executive Director Chuck Cullom acknowledged the program does not have a set conservation goal, however.

“From my perspective, the measure of success is not a particular volume of water,” Cullom said at the commission’s meeting Wednesday in Las Vegas. “We recognize that we are asking people in a significantly water-stressed environment to further curtail or reduce their beneficial consumptive use, through this compensated voluntary temporary approach.”

He added that the UCRC does not have a prediction for participation in the program, which will be funded by the federal Bureau of Reclamation.

“I quite frankly don’t have any sense of how many folks are willing and able to participate as they consider their own reductions that are brought by hydrology,” Cullom said. “For me success is that we have broad participation in terms of broadly distributed across the four states, broadly distributed among the water use sectors: municipal, industrial [and] agricultural users.”

Although the commission will begin accepting applications Wednesday, the program still depends on the passage of the Colorado River Basin Conservation Act, S. 4579 (E&E Daily, Nov. 28).

Collum said the commission expects Congress to adopt the measures this week.