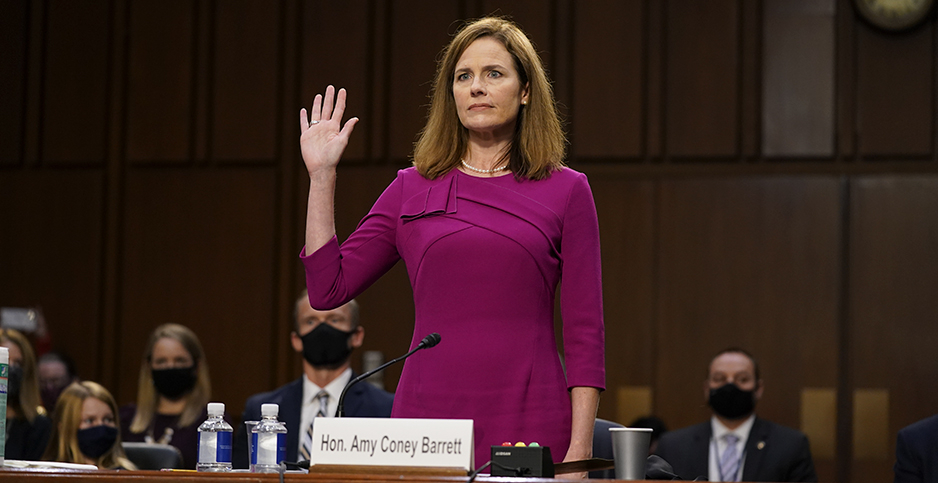 Judge Amy Coney Barrett, President Trump's nominee for the Supreme Court, during the first day of her confirmation hearings. Win McNamee/Pool via CNP/SplashNews/Newscom

Environmental issues remained on the back burner yesterday as the Senate began proceedings to approve President Trump’s nomination of Amy Coney Barrett to the nation’s highest bench, but the coming days will likely provide clues on how she would rule on air, water and climate policy.

Barrett formally introduced herself to the Senate Judiciary Committee by highlighting her relationship with the late Justice Antonin Scalia, a conservative luminary.

"His judicial philosophy was straightforward: A judge must apply the law as it is written, not as she wishes it were," Barrett said during her prepared remarks to the panel. "Sometimes that approach meant reaching results that he did not like."

Legal experts have looked to Barrett’s relationship with Scalia, for whom she clerked in 1998 and 1999, to predict how she would come down on environmental cases, which often involve questions on federal rulemaking and statutory interpretation.

Scalia’s environmental jurisprudence over the course of his three decades on the high court was nuanced.

In the 2001 case Whitman v. American Trucking Associations, Scalia applied the Chevron doctrine, which gives agencies leeway to interpret ambiguous statutes, to strike down an industry challenge that said EPA should have considered the economic impact of air quality standards.

In the years that followed, however, Scalia expressed more skepticism of Chevron, such as in his dissent in Massachusetts v. EPA, a 2007 case that said the federal government could regulate greenhouse gas emissions under the Clean Air Act.

Yesterday’s Judiciary Committee hearing stretched nearly 5 ½ hours and focused mostly on how Barrett’s presence on the Supreme Court would influence rulings on the Affordable Care Act and a possible showdown over election results.

But the proceedings also offered some hints that lawmakers would pepper Barrett with questions on administrative law principles and doctrines. Questioning begins today (Greenwire, Oct. 12).

The hearings are unlikely to change any senator’s mind, but they will push Barrett to address issues of importance to energy and environmental litigants. Here are four takeaways from yesterday’s session:

The hearings quickly turned into a politically divisive battle over the future of the Affordable Care Act, which the Supreme Court is set to examine on Nov. 10.

Health care helped Democrats win the midterm elections, and they think focusing on that issue will help generate opposition to Barrett, especially since she has written against President Obama’s health care law before.

"Please don’t tell us this isn’t about the Affordable Care Act," Sen. Sheldon Whitehouse (D-R.I.) said during the hearing.

The spat continued into the evening during a debate between Senate Majority Leader Mitch McConnell (R-Ky.) and his Democratic opponent, Amy McGrath (see related story).

"No one believes the Supreme Court is going to strike down the Affordable Care Act," McConnell said.

Once questioning starts, however, lawmakers on both sides are likely to focus on numerous issues beyond health care.

At one point yesterday afternoon, Louisiana Sen. John Kennedy (R) railed against the "rogue beast" of the administrative state, or regulation by the executive branch.

Conservatives on and off the court generally call for limits on the authority of federal agencies, like EPA, to craft rules on the environment and other issues.

Kennedy was making the point that Congress has ceded too much power to the courts and the executive, particularly members of the bureaucracy.

Barrett’s answers to questions today and tomorrow on Obergefell v. Hodges and Roe v. Wade could shed light on whether she would preserve precedent established by Massachusetts v. EPA or Chevron USA Inc. v. Natural Resources Defense Council, the 1984 case that birthed the Chevron doctrine.

The Supreme Court — with five conservative justices on the bench — last year had a chance to take down another form of agency deference in the case Kisor v. Wilkie but chose instead to simply reinforce limits on the Auer doctrine, which says courts should yield to agencies’ readings of ambiguous statutes, so long as their interpretations are reasonable.

Legal experts have cited academic writings by Barrett, who is also a law professor at the University of Notre Dame, that indicate she would be skeptical of attempts by agencies to invoke Chevron (Greenwire, Sept. 19).

Sen. Chris Coons (D-Del.) told Barrett yesterday: "Judge, I’m deeply concerned about ways in which your approach to something that may sound abstract to folks watching, stare decisis, or precedent, that means your approach to reviewing and reconsidering and possibly overturning long-settled cases may overturn some of the very principles for which Justice [Ruth Bader] Ginsburg fought her entire adult life, principles that protect settled fundamental rights for all Americans."

But Idaho Republican Sen. Mike Crapo said: "Judge Barrett’s thoughtful exploration of the precedent and the doctrine of stare decisis demonstrates that she is both intellectual and deliberative in her understanding of the law. Moreover, it’s evident that she understands the role of a fair and proper judge."

Although three Democrats voted to confirm Barrett to her current seat on the 7th U.S. Circuit Court of Appeals, the party appears united in opposition to Barrett’s confirmation — at least before the election.

Two moderate Republicans — Sen. Lisa Murkowski of Alaska and Sen. Susan Collins of Maine — have also said they do not favor swift movement on Barrett. Democrats say their arguments are meant to convince more GOP members.

But Democrats know they’ll likely be unable to stop Barrett from being seated on the court before Election Day.

"We do not have some secret, clever, procedural way to stop this sham. Let’s be honest," Minnesota Sen. Amy Klobuchar told reporters after yesterday’s hearing.

"And as good as we are, it’s probably not going to be some brilliant cross-examination that is going to change the trajectory of this nomination," she said.

Senate Minority Leader Chuck Schumer (D-N.Y.) suggested during a press conference over the weekend, according to media outlets, that Democrats wouldn’t give the GOP a quorum to vote on Barrett.

But the tactic is unlikely to block the nomination, and Sen. Dick Durbin (D-Ill.), a member of the leadership team, told reporters yesterday he was unaware of the tactic.

Republicans are due to wrap up hearings Thursday and have already scheduled a Judiciary vote for that same day. Because the panel’s rules allow the minority to request a delay, the actual vote will likely happen a week later.

That would set up a Senate floor vote the week of Oct. 26 — one almost certain to occur less than a week before voters head to the polls on Nov. 3.

Focus on the election

Powerless to stop Barrett’s confirmation, Democrats were eager to highlight the coming election for a variety of reasons.

If Barrett is confirmed to the Supreme Court before Election Day, she could help decide a possible legal brawl over the results of the presidential race.

Trump has indicated that he expects the high court to step in to "look at the ballots" in the event of a dispute over the outcome of the election.

The president has also suggested he would not agree to a peaceful transition of power if he loses his race against his Democratic opponent, former Vice President Joe Biden. Senate Judiciary Democrats brought up those concerns yesterday.

"This president in his vanity and constitutional recklessness refuses to commit to accept the will of the American electorate," said Durbin.

Democrats also condemned their Republican colleagues for pushing through Barrett’s nomination after committing in 2016 to not moving forward with an election-year vacancy in 2020.

Democrats are using the hearings to appeal to the American public. During her committee remarks, Klobuchar, for example, spoke directly to the viewing public.

Sen. Kamala Harris of California, the Democrats’ vice presidential nominee, was strong in her rebuke. She appeared remotely because of the pandemic.

"I do believe this hearing is a clear attempt to jam through a Supreme Court nominee who will take health care away from millions of people during a deadly pandemic that has already killed more than 214,000 Americans," she said.

During a press conference, Sen. Richard Blumenthal (D-Conn.) said: "They may win in this committee. They may confirm this justice. But the American people can still stop it if they stand up and they speak out."