4 takeaways from the health care debacle 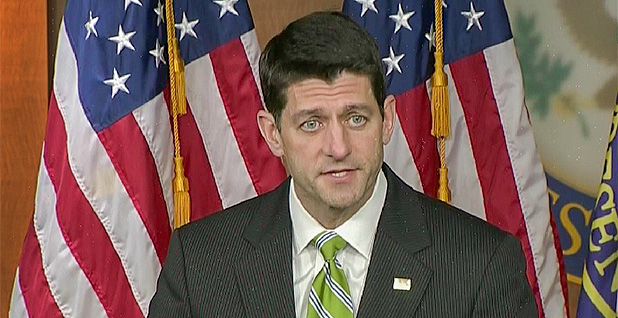 The spectacular collapse of health care legislation represents a crushing blow to the resurgent GOP majority and President Trump, raising questions over whether a Republican-led government can deliver on other big-ticket agenda items.

In the aftermath Friday, Speaker Paul Ryan (R-Wis.) acknowledged to reporters that Republicans had "growing pains" to sort out.

But Ryan pledged to move on with the "rest of our agenda" that includes items being closely watched by the environmental and energy communities.

"We want to secure the border, we want to rebuild our military, we want to get the deficit under control, we want infrastructure and we want tax reform," he said.

Senate Minority Leader Chuck Schumer (D-N.Y.) told reporters Friday said that if Republicans "keep governing from the hard right," then other legislative priorities like tax reform and funding the government are at risk.

"We don’t know what they will do in tax reform, but I can tell you this: If it’s huge tax cuts for the very wealthy and does very little for the middle class and working people, it won’t fly," he said.

Republicans on Friday downplayed the effects of the health care fiasco on their agenda, but the events offer a few clues to the evolving political dynamics of the Trump era.

Here are some takeaways:

House Energy and Commerce Chairman Greg Walden of Oregon was among the first Republicans to emerge from a caucus meeting Friday to announce the health bill was "dead." Left unsaid by Walden but noted by other committee members is that the health debacle could kick-start the committee’s energy and environment portfolio.

Reauthorizing the Energy Department, electric grid security and nuclear waste cleanup were among the items ticked off by Rep. Joe Barton (R-Texas), the former full committee chairman and current vice chairman, after leaving a meeting where Ryan told the caucus the health care vote was being scrapped.

Subcommittee on Environment Chairman John Shimkus (R-Ill.) said the panel will move other agenda items "one bill at a time," with legislation overhauling U.S. EPA’s ozone standards coming to markup in the near future.

Work on water infrastructure, brownfields and nuclear waste is already underway, he noted.

"We just got to do our work to eventually get them prime time on the floor," he said Friday. "Then you kind of turn that over to leadership and the Senate and figure out what they’re going to do."

Rep. Frank Pallone (D-N.J.), the ranking member on the committee, said Friday the health care focus had held up energy and environment work. "As long as they keep pursuing this goal [of repealing President Obama’s health care law], it’s going to be more and more difficult to move onto other things that Energy and Commerce has to do," he added.

Health care was the lead car that the GOP hoped would bring along tax reform.

The health care bill that was pulled Friday would have eliminated $800 billion in taxes and cut a similar amount in Medicaid spending. Under arcane budget rules, that combination would have lowered the federal revenue baseline and allowed Congress to make a similar amount of tax cuts in future years without affecting the deficit.

The White House and Republicans have said the cuts under the health care bill were vital to carrying out what they had hoped would be the first comprehensive rewrite of the tax code in more than 30 years. Without the additional revenue, it’s not clear the GOP will have the spending offsets to take an ax to all federal taxes.

"This does make tax reform more difficult, but it does not in any way make it impossible," Ryan told reporters after the health bill’s defeat.

With health care done for now, tax reform will be the next major Hill focus, with the GOP aiming to push comprehensive tax reform legislation this spring.

Rep. Chris Collins (R-N.Y.), a close Trump ally, acknowledging the problem Friday, said the "worst of if it" is how much harder it will now be to move ahead on tax reform in the wake of the health care collapse.

"Our fundamental tax reform won’t be as powerful," Collins said. "But we can move right into that."

Lawmakers suggested an entire rewrite of both individual and business taxes might now be out of reach due to the lost revenue. It’s not yet clear how it will affect one of the most controversial tax provisions floated by the GOP to create a tax on all U.S. imports, known as the border adjustment tax.

If Congress opts for a less costly and narrow push, it could take some steam out of what was expected to be a fierce fight among lobbyists over preserving those business breaks, including those favorable to energy producers and the renewables industry.

GOP factionalism may be growing

The health care misfire highlighted ideological fractures in the GOP that could affect many of the remaining agenda items.

The health care bill was not only brought down by the hard-right Freedom Caucus, which has been a thorn in the side of GOP leaders for the past several years, but resurgent moderates, including House Appropriations Chairman Rodney Frelinghuysen (R-N.J.), were equally crucial in killing it.

"The diversity of our conference has not found a way to come to consensus," said Rep. Kevin Cramer (R-N.D.), an Energy and Commerce Committee member who is seen as both close to leadership and the White House. In Friday’s aftermath, Cramer said, he was not "very optimistic" the party would do so anytime soon.

Rep. Mark Amodei (R-Nev.), a more moderate GOP appropriator who opposed the health bill, predicted the caucus is due for some soul-searching.

Moreover, at the start of this Congress, health care was the one agenda item on which Republicans were united. Most ran in 2016 calling for a repeal of the Affordable Care Act.

The failure to achieve it raises questions over whether the GOP will be able to find consensus on more controversial items like a $1 trillion infrastructure plan that conservatives have warned may cost too much. Or the administration’s push for deep domestic cuts at agencies like U.S. EPA already being panned by many moderate appropriators.

For all his campaign bluster about dealmaking, Trump couldn’t convince a majority of members of his own party to support the bill central to his agenda, indicating he’s likely to lose some credibility for forging other deals with Congress.

"You don’t cut the balls off a bull and expect he can go out and get the job done. This will emasculate Trump, and we can’t do that," said Rep. Dana Rohrabacher (R-Calif.), who said it was "naïve" for GOP lawmakers to believe this would not hurt Trump’s agenda.

Rohrabacher, a longtime aide to President Reagan before being elected to Congress, said much of Reagan’s success in getting bills through Congress was based on achieving an early, bipartisan victory on tax legislation.

Trump has suggested he might try to punish moderates and conservatives who aligned to block the health vote. But leaders of the opposition did not seem overly concerned about the president’s threats and said they would still like to work with him on issues like tax reform.

While many of the Republican lawmakers courted by Trump complimented his powers of persuasion, some also privately said the president didn’t really grasp the nuances of the policy debate. That too suggests they might be less likely to follow his lead going forward.

Democrats were quick to taunt Trump for failing to get his first major legislative lift off the ground.

House Minority Leader Nancy Pelosi (D-Calif.) insisted Democrats could work with Trump, noting the 2005 energy bill they had passed when they controlled the majority and Republican George W. Bush was in the White House. But she also was quick to criticize Republicans for mainly focusing on regulatory rollbacks in the opening weeks of this Congress.

"So, they have absolutely no record of accomplishment, except maybe to take away clean air protection, safe water — drinking water protection and the rest," said Pelosi.