4 things to know about the budget accord 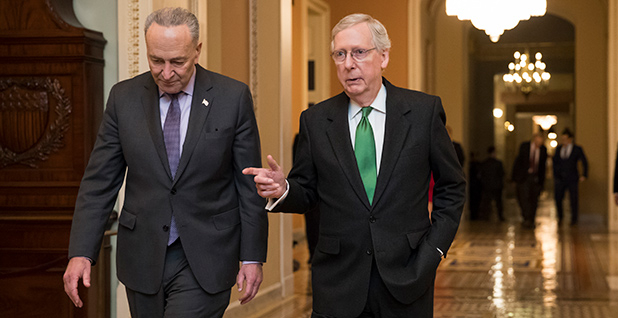 After hours of delay, Congress overnight signed off on a broad, two-year budget deal to raise spending for much of the federal government.

The agreement — passed 71-28 in the Senate and 240-186 in the House — will now pave the way for Congress to write the 12 annual appropriations bills that direct dollars to specific agencies and programs.

Here are four things the energy and environmental community needs to know about the largest budget deal Capitol Hill has passed in several years.

Lawmakers backed a deal that will raise federal discretionary spending by about $300 billion over the next two years for both defense and non-defense agencies.

Slightly less than half of the funding, $141 billion, will go toward domestic programs. It will be at least six weeks before any of those dollars are doled out.

In the meantime, all federal agencies will continue to operate under fiscal 2017 spending levels through March 23 to give appropriators time to write an omnibus.

That spending bill would come nearly halfway into fiscal 2018, which began on Oct. 1. Under federal budgeting rules, those dollars are not prorated, so agencies will still receive fresh funding for all 12 months of the year.

Spending increases will be targeted

Congress may have raised overall domestic spending caps, but the new dollars will target specific programs rather than providing across-the-board hikes.

"We are not handing these increases out uniformly and some areas will get cuts, it’s not like everyone is going to be spared by this," said Rep. Tom Cole (R-Okla.), a senior member of the Appropriations Committee.

Rep. Ken Calvert (R-Calif.), chairman of the House Interior-EPA spending panel, said several EPA grant programs would get a "strong look" for additional funds in what he said would be bipartisan negotiations.

Calvert also said he was concerned that capital spending accounts have been severely cut in recent years to help cover operating costs. He said he’d like to increase capital funding for some overdue Interior Department projects.

On the Energy and Water spending bill, bipartisan support could come for the House restoring at least some of the funding for the Advanced Research Projects Agency-Energy.

The chamber sided with the White House in zeroing out the Department of Energy laboratory to cover other needs in earlier spending plans, while Senate appropriators want to increase the agency’s annual budget by 8 percent.

No controversial energy or environmental provisions were in the budget deal, but policy riders still could be attached to the omnibus.

Dozens of riders have advanced through the full House or Senate panels, including more than three dozen related to Interior and EPA.

Riders on the table aim to limit legal challenges for new regulations the Trump administration plans to promulgate as replacements for Obama-era actions.

Still, GOP appropriator say there’s less pressure to attach riders this year with Republicans in control of both houses of Congress and the White House.

In many cases, the GOP has already been able to block or promote its preferred environmental and energy policies via the Congressional Review Act or executive orders.

The budget deal calls for spending about $20 billion of the discretionary spending increase over two years on infrastructure, including rural water and wastewater, clean and safe drinking water, rural broadband, energy and surface transportation projects.

Sen. Lisa Murkowski (R-Alaska), who chairs the Energy and Natural Resources Committee and the Interior and the Environment Appropriations Subcommittee, said the money will be appropriated at a later time.

"It is the spirit and intent of this agreement that appropriators will direct the resources toward all of this various infrastructure, including energy," she told E&E News yesterday.

That was an acknowledgement that Appropriations Committee members should make the funding decisions, with a "little direction" from the leaders of both parties, she said.

"I’m going to look at that and say, ‘OK there’s clearly a stated priority between the majority and minority leader, the two caucuses, that this should be a priority. How are we going to make this work?" she said.

House Natural Resources Chairman Rob Bishop (R-Utah) said he wasn’t sure yet where the $20 billion ultimately would be allocated.

"That’s what we are going to have to work out with Shuster," said Bishop, referring to House Transportation and Infrastructure Chairman Bill Shuster (R-Pa.). Bishop’s Natural Resources panel will work with other committees that have jurisdiction over infrastructure to determine policy priorities.

"To be honest, we have a lot of water projects that we would like," Bishop told E&E News yesterday, adding that "most of the things that we want are process reforms" such as streamlining the permitting process. "So the federal government could actually work, which would be a miracle."

Rep. Bill Flores (R-Texas), a member of the Energy and Commerce Committee, said he’d like some of the dollars to go toward making upgrades to the electric grid, including improving cybersecurity systems and expanding load capacities for distribution systems.

Flores said the $20 billion "primes the pump" for a much larger infrastructure plan that the White House will roll out as soon as Monday.