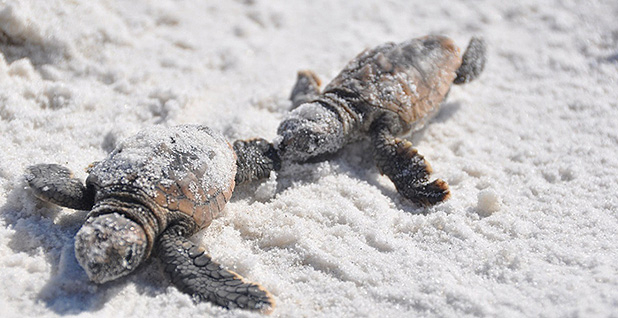 Young sea turtles move across the sand along the Gulf Coast. Bureau of Land Management

That’s right. The proposed regulatory revisions detailed in some 118 pages of bureaucratic text merit close scrutiny. Get past the off-putting references to "blanket 4(d) rules" and "foreseeable future" definitions, and the proposals have real significance for species, land owners and officials alike.

Consider the endangered dusky gopher frog, a case study in the notion of unoccupied critical habit.

A critical habitat designation requires that federal agencies consult with the Fish and Wildlife Service or NOAA Fisheries before approving or funding projects in the area. Prior to the Obama administration, the agencies would only designate habitat unoccupied by a species if they determined the species could not recover without it.

The Obama administration changed that to allow FWS and NOAA Fisheries to consider both occupied and unoccupied habitat at the same time (Greenwire, March 16).

That change made a difference for the dusky gopher frog, a species once found in Louisiana, Mississippi and Alabama but now confined to Mississippi.

FWS nonetheless designated 6,477 acres as critical habitat for the frog, including 1,544 acres of private land in Louisiana where the frogs haven’t been found in many years. The Supreme Court will hear a challenge to the decision in the fall (Greenwire, Jan. 22).

Under the new proposal, federal officials will first evaluate areas occupied by the species before considering unoccupied areas for critical habitat designation. There would be a higher bar to clear for including unoccupied territory.

"In order for an unoccupied area to be considered essential, the secretary must determine that there is a reasonable likelihood that the area will contribute to the conservation of the species," FWS stated.

The Arctic bearded seal was listed as threatened during the Obama administration.

The ESA defines a threatened species as one "that is likely to become an endangered species within the foreseeable future throughout all or a significant portion of its range." Neither the 1973 law nor current regulations, however, define "foreseeable future."

Citing climate change projections, NOAA Fisheries reasoned that ice sheets relied upon by two populations of the bearded seal will be all but gone by 2095. Federal officials called this foreseeable, while critics called it speculative (Greenwire, Aug. 1, 2017).

Rather than specifying a certain number of years, the new proposal states that agencies "will describe the foreseeable future on a case-by-case basis, using the best available data and taking into account considerations such as the species’ life history characteristics, threat-projection timeframes, and environmental variability."

"This change could severely limit protections for endangered species most affected by climate change," cautioned Sen. Tom Carper of Delaware, the top Democrat on the Senate Environment and Public Works Committee.

Think about the North American green sturgeon, a population of which was listed as threatened in 2006.

Three years later, NOAA Fisheries estimated the economic impact of the designation and accompanying critical habitat could span a wide range into the tens of millions of dollars.

The ESA requires listing decisions to be made "solely on the basis of the best scientific and commercial data available" and "without reference to possible economic or other impacts of such determination." The new proposal would eliminate the latter phrase.

"The Services will continue to make determinations based solely on biological considerations," the proposal states. "However, there may be circumstances where referencing economic, or other impacts may be informative to the public."

Carper, though, warned that referencing costs and other impacts "could undermine best available science" if it causes federal officials to think twice about protecting a species.

The threatened Louisiana pine snake might be a harbinger of things to come, and could help explain the jargon-filled rule.

Section 4(d) of the law allows the agency to establish special regulations for threatened species. In 1978, FWS used this authority to extend the prohibition of take to all threatened species. This is known as the "blanket 4(d) rule," and it essentially means threatened and endangered species enjoy the same protection.

This blanket rule can be modified by a species-specific 4(d) rule. Currently, for instance, FWS is considering a proposal for a 4(d) rule specifically tailored for the Louisiana pine snake.

The snake inhabits open-canopy forests with many ground-cover plants. Private property owners worried they might be blocked from forest thinning if all taking of the Louisiana pine snake was absolutely prohibited, so FWS wrote a rule that allows for some potential short-term take of snake or habitat.

"Weyerhaeuser is appreciative of the Service’s work to create a 4(d) rule that takes into account the needs of forest landowners to continue to manage their properties," the timber products company stated (Greenwire, May 7).

More of the same could be in the cards, under the Trump administration proposal to eliminate the blanket 4(d) rule for future FWS listings of threatened species. NOAA Fisheries already follows the practice of tailoring rules for individual species.

"Where we have developed species-specific 4(d) rules, we have seen many benefits, including removing redundant permitting requirements, facilitating implementation of beneficial conservation actions, and making better use of our limited personnel and fiscal resources," FWS stated.