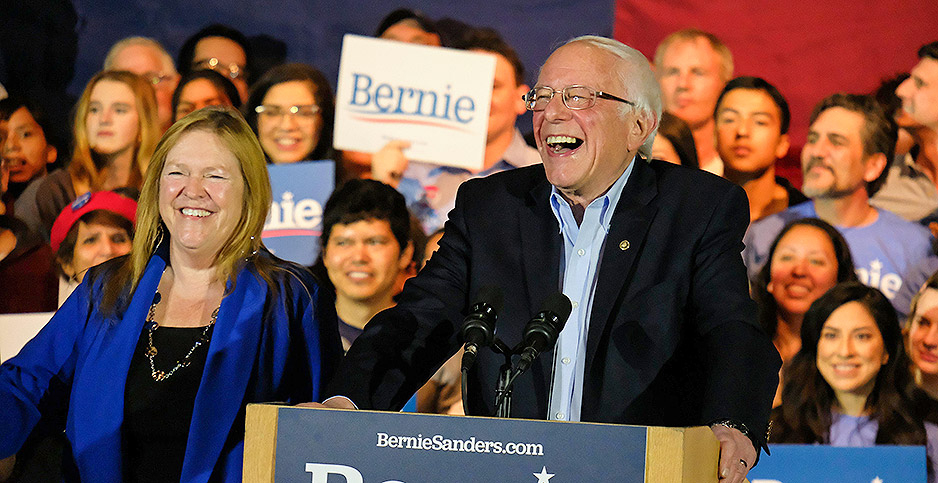 Sen. Bernie Sanders (I-Vt.) handily won the Nevada caucuses on Saturday. The key question this week is whether former Vice President Joe Biden has solidified his firewall in South Carolina with the Palmetto State set to vote in five days.

With 72% of the vote in, Sanders won the Nevada caucuses with 47.5%. Biden was a distant second at 20.8%, followed by Pete Buttigieg, the former mayor of South Bend, Ind., at 13.7%. All other candidates were in single digits.

South Carolina has long been considered Biden’s strength, with its large African American population and more moderate Democratic electorate. The latest poll from CBS News came out over the weekend and showed Biden with a 5-point lead over Sanders, 28% to 23%.

But while the candidates are spending time there this week ahead of Saturday’s primary election — including a debate tomorrow night — the fact that Super Tuesday comes three days later has meant some hopefuls are dividing their time elsewhere.

Sanders, who some Democrats worry is on an unstoppable path toward the nomination, traveled yesterday to Austin, Texas, where former presidential candidate Marianne Williamson endorsed him. Buttigieg went to Colorado on Saturday night before holding a town hall in Arlington, Va., yesterday afternoon.

Tom Steyer, the former hedge fund manager who has poured millions into his upstart effort, has been on the air in South Carolina since December. The relentless ads focus on the environment and how he would make the issue his top priority from day one.

Danielle Vinson, a political science professor at Furman University in Greenville, S.C., who specializes in state politics and congressional elections, said climate change and the environment are key issues for voters, but aside from concerns along the Charleston coastline, where most voters oppose offshore drilling, "it hasn’t seen the attention it deserves."

With time winding down in the primary process, here are four things to look for this week in South Carolina.

Sanders won every demographic in Nevada except for voters 65 and older, who broke for Biden.

Vinson thinks the state is still within Biden’s grasp. Although his second-place finish in Nevada wasn’t strong, she said it "stopped the bleeding" from his disappointing results in Iowa and New Hampshire.

"I really do think Biden will have the most votes in South Carolina. The question is by how much," she said.

Biden’s appeal is not just to the African American voters, who make up 27% of the population, but to Democrats as a whole who are more moderate than Sanders.

"A lot of our voters aren’t that progressive. They are much more moderate in their leanings, including the African American voters," she said.

A narrower field would also benefit Biden, Vinson said. "It would be really helpful if Amy Klobuchar dropped out and then was to support Biden," she said.

Klobuchar, a senator from Minnesota, finished a strong third in New Hampshire but was a disappointing fifth in Nevada with under 5% of the vote.

Not on the ballot

There are two names not on the ballot this week who could play a pivotal role: James Clyburn and Michael Bloomberg.

Clyburn (D), the House majority whip, has represented South Carolina in Congress for nearly 20 years. He is the highest-ranking African American in Washington. He has not endorsed a candidate yet, but that is expected to change this week. Whom he gives his blessing to could play a deciding factor.

Vinson said that if Clyburn endorses Biden, that will likely shore up supporters who were worried about his slide in the early polls.

But if he goes with another candidate, it’s unclear how that would translate. She expects him to go with Biden but noted that he is being pulled in different directions by competing interests who want him to support someone else.

"He may be the one endorsement that may matter in the state, because he is the most visible Democrat in the state," she said.

In an interview with the Charleston Post and Courier yesterday, Clyburn made clear he hadn’t made up his mind on an endorsement but indicated that he had narrowed it down to Biden, Klobuchar and Massachusetts Sen. Elizabeth Warren.

Bloomberg, the former mayor of New York City, is not advertising on local television. But he is on national television, and voters in South Carolina see those ads.

Some voters have shown up for early voting expecting to vote for him, only to find out he is not an option. How those voters eventually break is anyone’s guess.

"A lot of folks going to the polls on Saturday don’t know how they are going to vote," Vinson said.

Traditionally, there has been some lag time between South Carolina’s primary and Super Tuesday — the day when many delegate-rich states, including Texas and California — go to the polls. But this year, there are only three days.

As a result, some candidates are dividing their time among various locations. Aside from Steyer, many are traveling to other states in the waning hours ahead of Election Day.

His ads often focus on climate change and the environment, something he has made a priority in his campaign. While all the other candidates have been to the states "in fits and spurts … there has not been a sustained presence other than Steyer," she said.

For a lot of voters who may be worried about Biden’s slide, Steyer comes across not as liberal as Sanders, Vinson said.

The CBS poll out over the weekend had Steyer pulling 18% of the vote.

Vinson said that for the candidates who are on the cusp of elimination or who need a big win, specifically Biden and Klobuchar, it would be wise to stick around — whereas others can afford to spend less time there.

It’s unlikely any of the Democratic candidates will come back to South Carolina after Saturday. The last Democrat to win the state at the presidential level was Georgia Gov. Jimmy Carter in 1976.

But the Democrat at the top of the ticket does make a difference.

If it’s Sanders, that would make things harder for freshman Rep. Joe Cunningham (D-S.C.). Cunningham is a moderate who won his 2018 race in large part because his GOP opponent flip-flopped on offshore drilling.

Clyburn made clear yesterday that he hopes Sanders will not be the nominee.

"I do believe that it would be problematic with Bernie Sanders and his so-called democratic socialist label," Clyburn told The Post and Courier. "A lot of people, not just in South Carolina, but in this part of the country, would have a problem with that label."

Vinson said Democrats as a whole in South Carolina would benefit from someone other than Sanders at the head of the ticket.

"Joe Cunningham would like to have a more moderate member of the party [at the top of the ticket]. That would mean less questions" about some of Sanders’ more progressive views, Vinson said.

Cunningham isn’t the only one who would benefit from a more moderate standard-bearer. Although Vinson does not expect Sen. Lindsey Graham (R-S.C.) to lose in November, she does expect him to have a more competitive race than he has had in the past.

For Cunningham and Jaime Harrison, the Democrat hoping to unseat Graham, "if they can get a presidential candidate who is closer [to their views], it simplifies their lives."