4 things to watch during the Democratic convention 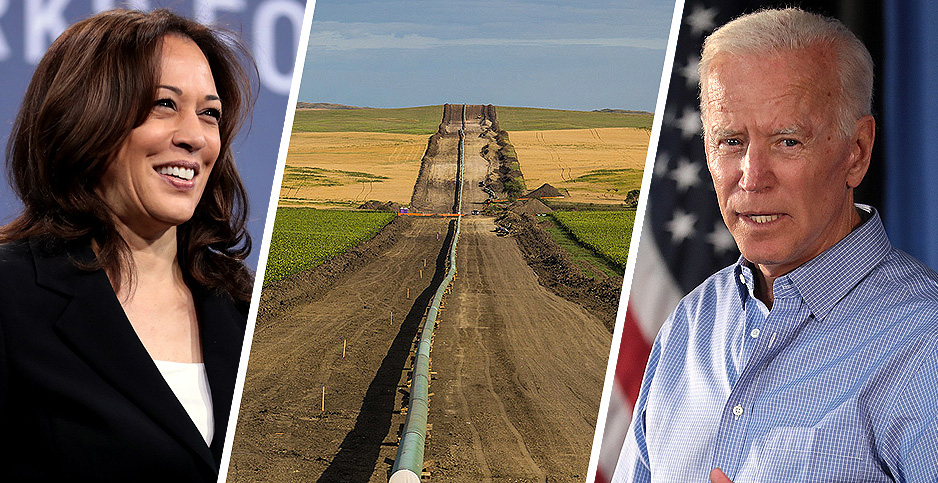 Democrats will gather virtually this week as their party convenes to officially nominate former Vice President Joe Biden as its standard-bearer, with a range of energy issues expected to surface.

As Democrats prepare to put on a united front to try to oust President Trump, who has rolled back environmental protections, they’ve downplayed some party divisions over issues including hydraulic fracturing and how best to realize a carbon-free power sector by 2035.

Environmentalists expect climate and clean energy to play a key role at the convention today through Thursday, though some advocates would like Democrats to go further.

"You’ve seen over the last week how aggressively Biden has put these issues front and center," said Lauren French, a spokeswoman for the Climate Power 2020 advocacy group. "Voters are actively looking for a candidate who is going to put energy and climate as a day one priority."

Here are four things to watch as the Democratic convention takes place:

A coalition of climate groups, including the Sunrise Movement, is petitioning the Democratic Party to develop a plan to stop new oil, gas and coal projects and phase out existing fossil fuel production nationwide.

That doesn’t go far enough for some environmentalists.

In 2016, thousands of environmental activists came to the Democratic National Convention in Philadelphia to demand an end to hydraulic fracturing for oil and gas extraction.

Biden has said he would halt use of the technique on public land but has stopped short of promoting a fracking ban. Harris, however, has called for a nationwide ban and as California’s attorney general filed suit against the Obama administration over the Interior Department’s permitting program for fracking off the Pacific coast (Climatewire, Aug. 13).

Biden’s onetime rival for the Democratic nomination, Sen. Bernie Sanders (I-Vt.), who in January filed legislation to phase out fracking, is scheduled to speak tonight. One of the bill’s co-sponsors, Rep. Alexandria Ocasio-Cortez (D-N.Y.), speaks tomorrow night, as does former Secretary of State John Kerry, with whom she co-chaired a Biden campaign task force on climate change.

Sanders said yesterday on CNN that what he "is going to do is do everything that I can to defeat Donald Trump, to elect Joe Biden," noting that Trump "does not even recognize science in terms of the pandemic or in climate change."

When Democrats talk about climate change, expect to hear the word "jobs." Biden has centered his climate action plan as a way to create millions of green-energy, union jobs and accused the Trump administration of stifling such jobs by rolling back environmental regulations. The Trump campaign charges that Biden’s plans will put millions out of work in oil- and gas-producing states like Pennsylvania and Texas.

A recent Pew Research Center poll found that while climate change is not a top concern for voters — the economy ranks No. 1 — a majority of the electorate still says the issue will be at least somewhat important.

Among registered voters, the poll showed the Republican Party with a 9-percentage-point edge over Democrats on handling of the economy, but the Democratic Party holds a gaping advantage among voters on climate change, 58% to 27%.

The Trump administration’s latest overhaul of environmental regulations came just last week — with the White House choosing Pennsylvania to announce its plan to pull back Obama-era regulations on methane emissions from the oil and gas sector (Energywire, Aug. 14).

Biden’s campaign was quick to portray the move as leaving green-sector jobs out in the cold.

"Not only is the Trump administration putting the health of our workers and their communities at risk, but stunting the growth of clean energy technology and jobs that would strengthen local economies," Biden spokesman Matt Hill said.

"Joe Biden will fulfill the obligation we have to the workers who built this country — he will listen to the science, tell the truth, and protect Americans’ health while creating millions of good-paying, union jobs that fuel a clean energy revolution and tackle climate change," Hill said.

TC Energy Corp. — the developer of the Keystone XL oil pipeline — announced earlier this month that it had reached an agreement with four major U.S. labor unions to construct the project, creating some political pressure for Biden. Biden said in May that he would stop the pipeline "for good by rescinding the Keystone XL pipeline permit," but his campaign has not elaborated further.

John Coequyt, director of the Sierra Club’s federal and international climate campaign, said that with diminished drilling in the United States, there may be more companies canceling pipelines. He called for moving away from fracked gas and fossil fuels. But he said there may not be a lot of discussion on pipelines during the convention because of a lack of consensus on them in the party.

Still, Coequyt said, "I think there’ll be a discussion on clean energy jobs in the future and the need to put Americans back to work on infrastructure projects."

"There’s a lot of good opportunities to frame this [around] recovery, and a recovery that creates good-paying jobs and that’s equitable," he said.

Along those lines, the speakers at the convention will include Gerald Lang, a member of the United Auto Workers union and a team leader at a General Motors Co. assembly plant in Michigan that is building electric vehicles, including the Chevrolet Bolt EV.

Biden has pledged to achieve a carbon-free power sector by 2035, and the Democratic platform calls for sweeping progress on cleaner electricity, but it’s not clear how a transition will play out beyond more wind turbines and solar panels.

Broadly, the party has a goal of net zero U.S. greenhouse gas emissions no later than 2050. It seeks to end carbon pollution from power plants by 2035.

The platform says its approach "is inclusive of all zero-carbon technologies, including hydroelectric power, geothermal, existing and advanced nuclear, and carbon capture and storage."

That wide framing may attract significant Democratic support, though not without pushback from the party’s left flank on what counts as clean. Using captured carbon dioxide at power plants to facilitate off-site oil production and embracing reactors without solving questions about nuclear waste are just two of the tension points Democrats face.

Coequyt of the Sierra Club said he believes net zero plans should be addressed "when the convention talks about how to put people back to work." He said a lot of jobs can be created in clean tech, including in transportation.

He described an electric future focused on wind, solar and batteries but acknowledged that organized labor has workers in sectors where carbon capture and storage is appealing.

"Carbon capture could very well be important in the industrial sector," he said. "But it doesn’t look like it’s going to be very competitive in the electric sector."

The U.S. Energy Information Administration said recently that natural gas-fired plants are expected to grab some 40% of the nation’s power generation share in 2020, while renewables may take about 20% and coal 18%.

Biden has proposed a $2 trillion infrastructure and clean energy plan, though wild cards on any path forward include how to build long-distance transmission lines to move renewable energy and how widespread battery use may become on the power grid.

A number of U.S. investor-owned electric companies have clean energy or net zero carbon emissions goals tied to 2045 or 2050, for example, instead of 2035 (Energywire, July 15). Experts caution that the last 10% to 20% of creating a fully clean power mix could be both expensive and challenging to achieve.

Trump and his allies will mount a counterprogramming effort with ads and campaign rallies.

Trump has already made it clear he plans to go after Biden on fracking, using Harris’ call for a ban to renew his attacks.

And Trump will campaign in Old Forge, Pa., on Thursday — as Biden takes the stage to accept the Democratic nomination.

Talking to reporters Saturday at his golf club in New Jersey, Trump brought up Democrats’ opposition to fracking when he insisted there’s more enthusiasm for his campaign than there was in 2016.

The American Petroleum Institute today will release new polling data from 12 states that it says shows support for oil and gas.

The private polling — conducted by Morning Consult — found that 63% of respondents believe the industry has an important role in helping the U.S. economy bounce back from the economic impacts of the COVID-19 pandemic.

The survey of 8,600 registered voters also found that 64% of voters would be either "much more" or "somewhat more" likely to cast their ballot for a candidate who backs policies that ensure consumers have access to U.S.-produced natural gas and oil.

API President and CEO Mike Sommers said the polling shows the U.S. voters know oil and gas will be "a key component of America’s economic recovery."

Daphne Magnuson, a Natural Gas Supply Association spokesperson, said that if the group could "wave a magic wand," it would like to see this week’s Democratic speakers acknowledge the importance of natural gas — which she called a partner to renewable sources — to a clean energy future.