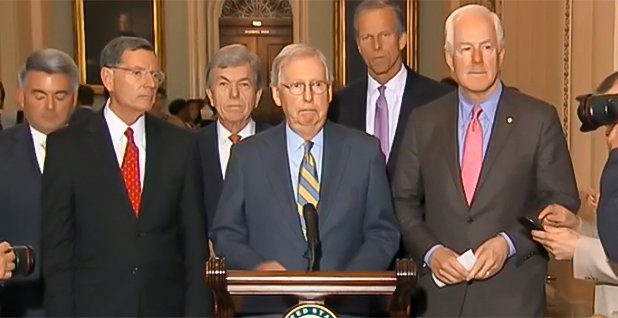 Congress, fearing a government shutdown, is pressing to pass as many spending bills as possible before the new fiscal year begins on Oct. 1.

Negotiations in the coming weeks will cover policy riders, programs like the Land and Water Conservation Fund, and whether to approve emergency dollars for wildfires.

The Senate returns today for a rare mid-August session, where its main goal will be advancing the two largest of the 12 annual appropriations measures in a single package.

Together, the Defense and Labor-Health and Human Services bills would account for nearly 3 out of every 4 discretionary dollars to be spent in fiscal 2019.

Senate GOP leaders are due to call up the defense spending bill, S. 3159, later today. The idea is to later amend it to attach the Labor-HHS bill, S. 3158.

If a truce on avoiding controversial riders holds, the legislation could pass by next week and the Senate would then likely join the House in a summer break that will extend until just after Labor Day.

Negotiations, meanwhile, continue behind closed doors over several bills that have already passed both chambers, including those funding EPA and the Energy and Interior departments. Lawmakers want staff to hash out final versions this month so Congress can quickly send them to the president in September.

EPA, Interior and Energy won’t see major changes over current spending, with all three agencies on track for either flat funding or relatively modest increases as negotiations play out.

EPA is likely to get very close to its current $8.1 billion for fiscal 2019, a figure that would match its current dollars, signaling some congressional support for an agency the White House proposed slashing by $2 billion.

However, there could be some grumbling at the agency and from environmentalists about regulatory programs getting trimmed in favor of more dollars directed to politically popular clean and safe drinking water grants.

Interior, too, is likely to receive flat funding for the coming fiscal year at $13.1 billion. The National Park Service could see a modest increase in its $3.25 billion budget to address its maintenance backlog.

Other programs and agencies covered by the Interior-Environment bill — such as LWCF, the payment in lieu of taxes program, the Fish and Wildlife Service, and the Bureau of Land Management — are due to match their current spending (Greenwire, Aug. 1).

The Energy Department could see some modest increases, especially for science-related programs. Those efforts are set to get a few hundred million dollars above their current level of $6.6 billion, with much of the funding going toward upgrading nuclear laboratories (E&E Daily, June 29).

Lawmakers are expected to at least maintain current dollars for two programs — the Advanced Research Projects Agency-Energy and the Office of Energy Efficiency and Renewable Energy — that the president has targeted for cuts or elimination. Lawmakers could also press for boosting fossil fuel research.

And for workers, Congress is likely to end up backing the Senate’s call for a 1.9 percent federal pay increase in fiscal 2019 rather than the House’s proposed pay freeze (E&E News PM, June 19).

While almost nobody on Capitol Hill seems to want a federal shutdown, no one knows whether President Trump is on their side in wanting to avert one.

Trump has frustrated GOP leaders in recent weeks by repeatedly suggesting he might allow federal funding for agencies to expire on Sept. 30 unless he gets billions of dollars in border wall funding.

Many Republicans are hoping the president will hold off on the threat until after the elections. They note he has made similar pronouncements in the past before begrudgingly signing spending bills.

A continuing resolution would cover whatever agencies don’t get money though minibus packages. Those temporary dollars would extend until December, meaning Congress would finalize any loose ends in a lame-duck session.

Both parties believe the more bills they pass, the harder it would be for Trump to reject them. It’s not clear how many bills could be finalized in coming weeks, although even three or four would be notable progress over recent years.

Energy and water spending is seen as more likely to be completed than Interior-EPA, given bipartisan support for Army Corps of Engineers water projects.

Lawmakers have already decided three spending bills will wait until after the elections: the Commerce-Justice-Science, State and Foreign Operations, and Homeland Security measures.

Controversial policy riders are likely to disappear from any final spending bills in a bid to avoid a Senate blockade.

The House’s Interior-EPA measure, now within H.R. 6147, has several contentious add-on provisions, among them language to scrap the Clean Water Rule and rollbacks of the Endangered Species Act.

GOP lawmakers privately concede the House riders are attempts at election-year messaging and that many of the proposals, including on water, are unnecessary because of an administration that shares their policy goals.

On the Energy and Water spending bill, the biggest policy issue remains whether to provide funding for the Yucca Mountain nuclear waste repository in Nevada.

House lawmakers insist they’ll press for funding the waste site in negotiations, but Senate Republican leaders are likely to resist. One of the GOP’s most vulnerable senators, Dean Heller of Nevada, has pushed to halt the project, and Republicans are unlikely to buck him with the elections less than three months away.

Wildfires now scorching the West and an expiring land conservation program could be factors in the spending talks.

Congress has yet to receive a request for emergency spending related to the wildfires, but aides expect one will come given the scale of the damage. Moreover, costs could mount as the worst fires generally occur in September and October as the Santa Ana winds pick up in California.

Both House and Senate aides believe there would be bipartisan support for wildfire aid, a total that could stretch into the billions. They say the funding could ride on whatever spending package passes before Oct. 1.

Congress also needs to address LWCF, which will see its authority expire on Oct. 1.

While the program has broad backing in both chambers, the most likely outcome is an extension of a few months to buy lawmakers’ time to hammer out what’s been an elusive permanent reauthorization (E&E News PM, July 31).