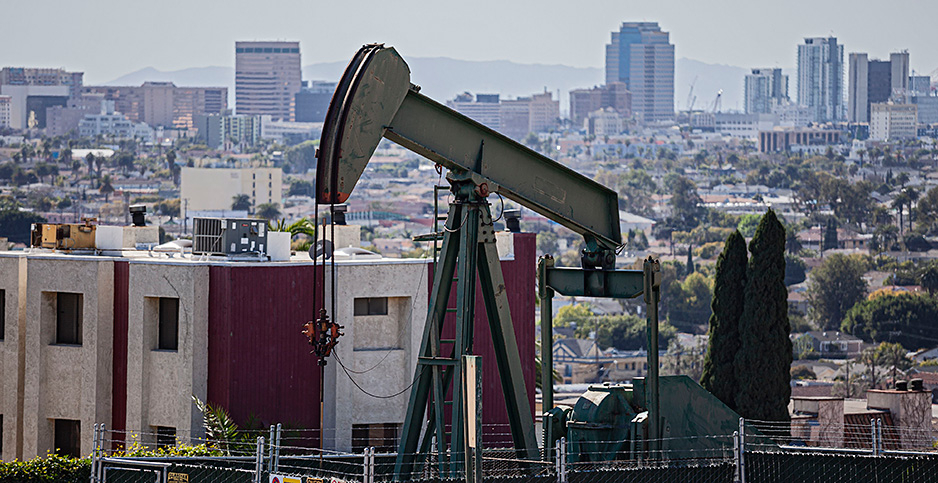 A pumpjack in a residential neighborhood of Signal Hill, Calif., outside of Long Beach. Polluted areas like this one are gaining attention by the Biden administration. Peter Bennett/Citizen of the Planet/Newscom

For decades, government officials have too often ignored front-line communities when it comes to pollution protection and public amenities. President Biden has given three top White House officials until May 27 to figure out how to fix that.

They were given 120 days to formulate recommendations to meet a "goal that 40% of overall benefits flow to disadvantaged communities" from "certain federal investments" in areas such as clean energy and energy efficiency, public transit, and affordable and sustainable housing.

The 40% directive appears to cover spending from future legislation — such as Biden’s proposed economic recovery and infrastructure packages — as well as existing federal programs. Agency heads would have 60 days to start to incorporate that guidance into their programs after the White House trio releases its results.

It’s a tall order, especially since Tanden hasn’t been confirmed yet and Biden’s order mandates consultation with affected communities. Brenda Mallory, who has been nominated to head CEQ, is also awaiting confirmation.

Another challenge: the order’s vague language. The loose definition of 40% is meant to provide the administration some wiggle room, but it also makes it harder for Biden officials to gauge progress.

If the commitment were simply to direct 40% of spending to disadvantaged communities, that would require only that the White House establish an investment baseline for new and existing spending and reserve 40% of that for target communities.

But assessing "benefits" in the amount of 40% is more complicated, environmental justice experts say, and demands the creation of distinct and credible metrics to value benefits from investments in programs with missions as diverse as health care, pollution abatement, employment and affordable housing.

Fortunately, Biden has an in-house expert in Martinez.

Before joining the White House climate team, Martinez was an environmental justice researcher and founder of the Center for Earth, Energy and Democracy. Three years ago, her group started the Equitable & Just National Climate Platform with the Center for American Progress to give communities disproportionately burdened by pollution and climate change a seat at the table well ahead of any hoped-for transition to a new Democratic administration.

"Usually, the mainstream environmental groups are doing a lot of that work very early on, and environmental justice organizations, who have much less capacity, come in much later in a reactive way," said Ana Baptista, an assistant professor in the Environmental Policy and Sustainability Management graduate program at the New School and a signatory of the platform. "This was an attempt to try to bring the two groups into alignment and conversation early, before the presidential platforms are well developed, to ensure that environmental justice was centered in those platforms."

After Biden embraced the 40% commitment for environmental justice and front-line communities last summer — a provision borrowed from a New York state climate law enacted in 2019, which Biden White House deputy national climate adviser Ali Zaidi previously worked on — platform members spanning the mainstream and grassroots environmental justice worlds came together again to think about what that should mean and how it should be measured.

First, the May recommendations should define the communities that deserve to be targeted because of a history of being burdened disproportionately by environmental and climate harms. These include low-income neighborhoods, communities of color and populations located near significant pollution sources.

Next, the administration must identify the resources that can help them. Finally, it has to develop a means of tracking that investment.

Just as important as identifying worthy communities is defining what constitutes a benefit to them, Baptista said. That hasn’t always been done carefully in the past.

She gave the example of highway construction projects undertaken by the Department of Transportation.

"DOT will say, ‘This is benefiting this community in Los Angeles. They’re an environmental justice community. We’re widening the road. You’re welcome,’" she said. "And the EJ community that lives next to the highway says, ‘That thing that you call a benefit, we call a burden, because it’s producing tons of air pollution, and it’s serving commuters that are not in our community. So in fact, your benefit is our burden.’"

At a December meeting, the Equitable & Just National Climate Platform adopted recommendations that have been forwarded to Martinez, who led Biden’s transition team for CEQ. The group is due to release a follow-up this week.

The December memo proposed ranking environmental justice communities based on their level of need to ensure that benefits don’t skip the neediest communities, and instead flow to places with some disadvantages but a higher relative capacity to work with federal agencies on projects.

The platform’s participants also counseled the administration to "maintain an intentional focus on dismantling systemic racism."

EJ advisers at every agency?

Peggy Shepard, co-founder and executive director of We Act for Environmental Justice, said she wants to see Martinez and her White House colleagues recommend the creation of advisory committees on environmental justice at each federal agency to help guide Biden’s spending commitments.

"And there must be, to my mind, some sort of central administration and monitoring of where those moneys are going," she said.

California’s carbon cap-and-trade law directs 35% of revenue to underserved communities, but Shepard said there is consensus among environmental justice advocates that the money has often been misspent. We Act is involved in setting up the newly minted New York program, including thinking through how the 40% allocation to environmental justice and front-line communities would be deployed.

She said it is also important to define front-line and environmental justice communities, which are frequently conflated but are distinct. Front-line communities disproportionately struggle with pollution and a lack of enforcement for high-emitting facilities in their midst — often following segregated housing patterns established many decades ago.

Environmental justice communities are often defined through demographics and income and might be subject to disproportionate climate impacts or other factors.

Biden hopes to follow this month’s coronavirus relief package with an economic stimulus bill that would invest in infrastructure, including green energy projects. The package would follow in the footsteps of a bill that he helped secure congressional support for as vice president in 2009, and that directed funding to "shovel-ready" projects across the country in hopes of hastening the end of the Great Recession.

While the American Recovery and Reinvestment Act was heralded as a historic investment in America’s green energy sector, environmental justice advocates said their communities were sidelined. By prioritizing shovel-ready projects, the stimulus bill funneled revenue disproportionately toward wealthier areas where investment was easier.

The platform’s recommendations propose that the Biden administration ensure that a lack of technical expertise doesn’t become a barrier to a community’s accessing funds.

"There will be a lot of investments flowing this year, and we have to make sure right away that these investments are going to the right places," said Rachel Cleetus, policy director for the Union of Concerned Scientists’ climate and energy program.

Cleetus, who also participates in the platform, said she doesn’t expect Martinez, Tanden and McCarthy to release a document in May that answers every question about how the 40% commitment would be provided and accounted for.

Rather, she said, Biden’s initiative, which has been dubbed "Justice40," will be a "down payment" on what must be a sustained effort to reverse the legacy of racism and fossil fuel dependence that has hurt front-line communities and affected the health of their residents.

"Pretty much everywhere you look, whether it’s pollution or COVID or the economy or climate, what you see is a disproportionate impact on communities of color and low-income communities," she said. "This is a year where we know that, as a nation, there are going to be big investments needed to address the COVID pandemic, get the economy back on its feet and address the climate crisis at the same time and the pollution crisis. And so they’re trying to make sure from the get-go that the investments that we make this year and going forward will try to address these very long-standing impacts of structural racism."

Michele Roberts, a national co-coordinator for the Environmental Justice Health Alliance for Chemical Policy Reform, said Martinez and her team should engage in early consultation with environmental justice community members themselves — not only with their professional advocates and lawyers.

A formal consultation process on the Justice40 goal hasn’t yet begun.

Asked how the "benefits" in Biden’s order should be measured, Roberts said they should reflect "the lived experience of the communities themselves" and should come with safeguards to prevent residents from being priced out of their communities once they’ve been cleaned up and improved.

Roberts said the fact Martinez will be at the helm of this process gives comfort to the communities she works with.

"The people feel for the first time in forever that they have access to the White House. They have never felt that way before," she said.