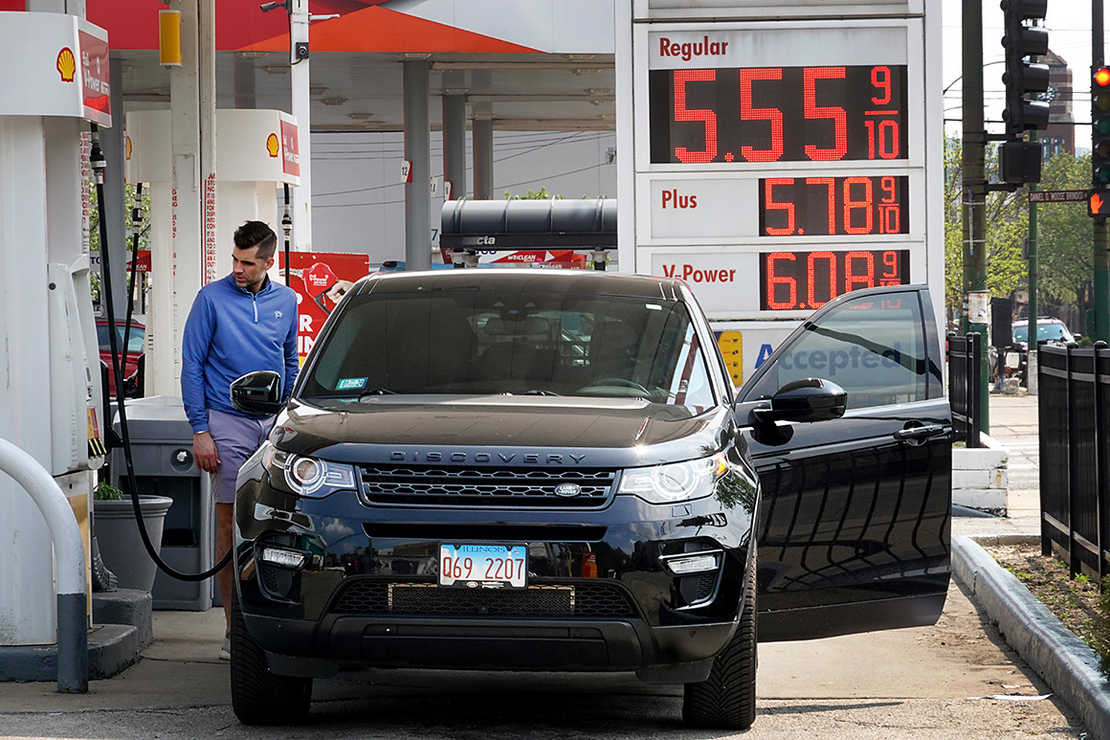 U.S. gasoline broke above $5 a gallon over the weekend, a record average driven in part by the Russia-Ukraine war and Americans’ pent-up desire to travel.

Five dollars is a psychological barrier for many drivers, and it came after a series of all-time highs fell over the past few months. In a sign of the mounting frustration, President Joe Biden criticized Exxon Mobil Corp. on Friday for not producing more oil.

The national average for a gallon of regular gasoline was $5.01 as of yesterday, AAA said. The price was over $5 in 21 states and the District of Columbia. Diesel prices reached a new record of about $5.77 a gallon, according to AAA.

Energy prices helped drive the national inflation rate to 8.6 percent for the 12 months that ended in May, the highest level since December 1981, the Labor Department announced Friday. Rising energy costs — especially for gasoline — present a political challenge for Biden, who analysts say has limited options to try to push prices down.

The average U.S. gasoline price is still lower than 14 years ago, when adjusted for inflation. In July 2008, gasoline reached $4.11 per gallon — which would be over $5.40 a gallon as of last month. But the $5 mark is an important one for consumers, who are already struggling with rapidly rising prices for groceries and other necessities, said Devin Gladden, a spokesperson for AAA.

“I think it just compounds the economic anxiety that most Americans feel at the moment,” Gladden said in an interview.

At $5 a gallon, about three-fourths of drivers said they would begin changing their habits — taking shorter trips, carpooling or canceling vacations and other nonessential driving, according to a AAA poll released in March.

Some researchers say they’re beginning to see evidence of those changes, which could ultimately push down demand for gasoline and diesel and help ease the price crunch. Fuel purchases during the week that included Memorial Day, which is typically the start of the summer driving season, were 15 percent below 2019 levels, according to the Oil Price Information Service.

“These numbers are high enough now I think we’re going to see some demand destruction,” Tom Kloza, global head of energy analysis at OPIS, said in an interview last week.

Other analysts said prices could still climb. Oil producers, including Saudi Arabia and other OPEC members, cut their production sharply during the Covid-19 pandemic and have been slow to bring back output even as the world’s economy recovered and pushed up oil demand.

That trend was already forcing up the price of oil when Russia invaded Ukraine in February. Since then, international sanctions have forced some Russian crude off the world market, along with the country’s diesel fuel and other refined products.

Compounding the problem, several U.S. refineries closed during the pandemic. The remaining plants are running near capacity and earning record margins for every barrel of oil they process into gasoline and diesel, analysts at JPMorgan Chase & Co. said in a research note last week. Unless more refining capacity comes online, gasoline could hit $6 a barrel by August, JPMorgan said.

“Refiners have the kind of opportunity they wait decades for,” the note said.

The Biden administration has released oil from the Strategic Petroleum Reserve this year in an effort to ease the price spikes. The president also has been considering meeting with Saudi Arabian officials, according to the Associated Press and others.

U.S. producers have increased their output somewhat but have been under pressure to avoid spending on big drilling projects and return their profit to investors by buying back their own stock.

Biden vented his frustration with the industry Friday during unscripted remarks after a speech at the Port of Los Angeles. He said the company was refusing to drill more oil, while profiting from higher prices and prioritizing stock buybacks.

“Exxon made more money than God this year,” he said.

An Exxon spokesperson said the company has increased production from the Permian Basin by 70 percent between 2019 and 2021, and plans another 25 percent increase this year (E&E News PM, June 10).

“The American people are looking for solutions, not finger pointing,” Frank Macchiarola, a senior vice president at API, said in an emailed statement.