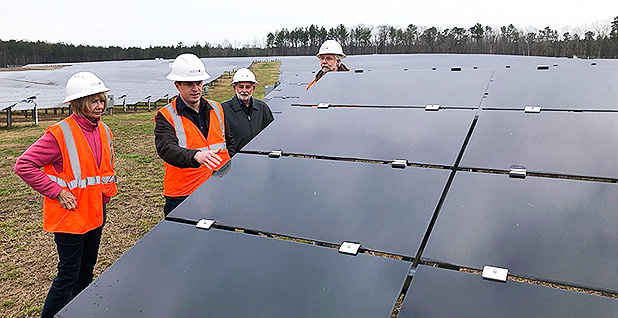 Democrat Dan McCready (second from left), who is running for a congressional seat in North Carolina, visited a solar farm in March. He highlighted solar power in a recent campaign ad. @McCreadyForNC/Twitter

For Democrats, the environmental message typically is paired with talking points about job creation or the economy. For Republicans, work on climate or conservation issues is held up as an example of the candidate’s bipartisanship or independence from the Trump administration.

Here are some environmental ads from five races — and why they matter.

In a typical year, this seat wouldn’t raise an eyebrow. The ruby-red district along the state’s southern border backed Donald Trump over Hillary Clinton in 2016 by more than 11 percentage points.

But McCready has made a race of it, helped by the fact that Rep. Robert Pittenger lost the Republican primary to challenger Mark Harris — depriving the GOP of the built-in advantage of an incumbent candidate.

McCready’s background as a Marine and a solar power investor helps, too, and he highlights both experiences in a new ad this month that opens with a wide shot of a field of solar panels.

"Good work can be hard to find," says a man described in the ad as a utilities construction manager. "Dan McCready made North Carolina a leader in solar power, which created good jobs for people like me."

The nonpartisan Cook Political Report rates this race as a toss-up.

Paulsen, who’s finishing his fifth term, has faced tough political environments before, but his matchup this year against Democratic-Farmer-Labor Party candidate Dean Phillips could be his biggest challenge yet.

Clinton carried the Minneapolis-area district by 9 points two years ago, and a poll this month by The New York Times and Siena College found that Paulsen is down by the same amount to Phillips, a businessman.

Paulsen tried to create space between his campaign and the Trump administration this summer with an ad of him standing in the great outdoors.

Unlike many of his GOP peers, including Trump, Paulsen has objected to efforts to allow mining on hundreds of thousands of acres near the Boundary Waters Canoe Area Wilderness.

But environmentalists argue that Paulsen has been wrong on a number of other issues. His lifetime score with the League of Conservation Voters comes in at 16 percent.

It could be one of the most powerful political ads of the midterm elections, and Whitmer does it without saying a word. Instead of narration, the only sounds come from young children giggling and running around a sprinkler. And birds.

Overlying the kids in bold text are the names of several Michigan locales and a few other words: "Dozens of water systems in Michigan now have more lead than Flint," it reads. "It’s time to clean up our water."

Whitmer, a former state lawmaker, is running against Republican Bill Schuette for governor, and both candidates have tried to harness voters’ anger at the Flint water crisis.

Schuette has emphasized his time as state attorney general and the dozens of criminal charges that have been filed since his office started investigating Flint’s contamination.

In an effort to undercut Schuette, however, Whitmer and her allies hit back with another ad this week that blames him for ignoring complaints about the water.

His campaign disputed that account, telling the Associated Press yesterday that it referred concerns to the state’s environmental department.

Cook has given the edge to Whitmer in the race.

This year was never going to be easy for Tester, a Democrat running for re-election in the Republican stronghold of Montana.

Trump carried the state by more than 20 points, and Tester has attracted a serious opponent in GOP state Auditor Matt Rosendale.

Because of that, Tester has tried to highlight the times he’s worked with Trump — to the point where he took out newspaper ads in July thanking the president for signing 16 of his bills into law.

But there have been moments, too, when Tester has pushed back, notably on the issue of public lands.

Tester said he opposes efforts to hand over control of federal public lands to individual states, a stance he made clear in an ad this summer.

"As long as I’m in the U.S. Senate, Montana is not for sale," Tester said in the spot.

His stance in a tough re-election year has been encouraging to environmentalists in the West, where the issue looms large.

Cook recently changed its rating of the race from "Likely Democratic" to "Lean Democratic," a switch that analyst Jennifer Duffy attributed in part to the fact that "Rosendale appears to be holding his own, despite a constant barrage of attacks from Democrats."

The candidates: Bill Nelson, Democrat, and Rick Scott, Republican.
The race: Florida Senate.
Click here and here for the ads.

Environmental ads have been coming fast and furious in Florida, where Democrats and Republicans have feuded over the state’s ecological problems of red tide and blue-green algae.

Scott, the current governor, and Nelson have thrown the biggest haymakers as they compete for Nelson’s seat in the Senate.

Nelson and his allies have tried to blame the Scott administration, which has cut hundreds of millions of dollars from the state’s water management.

"Florida’s algae bloom crisis is a man-made problem," notes one anti-Scott ad, "made by this man, Rick Scott."

Scott has pushed back — releasing his own ad that attacks Nelson for leaving a congressional hearing on the issue.

Cook considers this race a toss-up.

Other Florida politicians have joined the fight.

Democrat David Shapiro jumped into the fray this week with a spot that dinged Republican Rep. Vern Buchanan for voting "to weaken regulations that fight the pollution that make red tide worse."