5 energy and environment issues to watch in next aid package 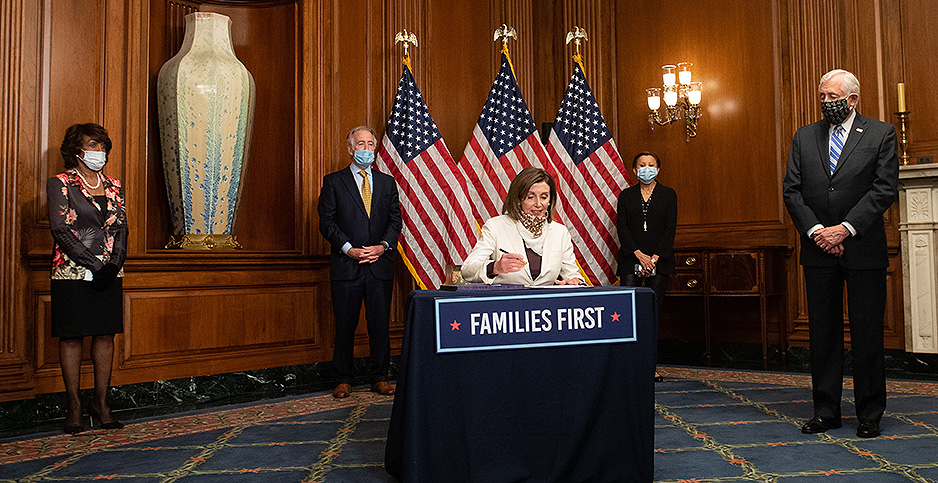 As oil prices crater, renewable energy projects get delayed and water supply concerns persist, lawmakers are wrestling with the energy and environmental issues resulting from the COVID-19 pandemic.

They have already allocated nearly $4 trillion to combat the disease that has upended life and economies around the globe, and another broad stimulus package is likely in coming months.

Democrats want to move fast and say their priorities for the next stimulus bill are aid to state and county governments, more coronavirus testing, and extending assistance to millions who have lost their jobs.

Republicans aim to move cautiously, saying they want time to assess the impact of the trillions in current aid, but they have not closed the door on another massive legislative package.

Regardless of timing, energy and environmental issues will come up in any discussions. Here are five issues to watch:

President Trump caught the attention of energy companies and fossil fuel opponents with his tweet last week that he would "never let the great U.S. Oil & Gas Industry down" amid a historic price drop (Greenwire, April 21).

His focus seems to be on allowing the oil and gas industry to tap into $600 billion in aid Congress approved last month in relief for midsize and large businesses that now is being overseen by the Federal Reserve.

The Fed has begun pursuing steps to make those loans available, but energy state lawmakers could push for provisions in the next aid package that would ensure those funds are easily accessible.

Senate Republicans are also calling for relaxing rules on the aid program that they say prevent loans to companies with low credit ratings.

Independent energy producers are particularly hamstrung by the requirement, as many are heavily leveraged and have weak ratings.

Additionally, both parties could seek to further extend the popular federal Paycheck Protection Program that makes and forgives loans to small businesses provided they avoid layoffs.

Already, smaller oil, gas, coal and mining operators have received more than 11,000 loans valued at about $3.9 billion, a small fraction of the more than $350 billion in loans issued.

But several Senate Democrats are pushing back against any preferential treatment for fossil fuel companies in the aid programs and have urged the Fed to consider climate risks in making loans.

They could try to put sharp restrictions on fossil fuel loans in the next stimulus, a move that green groups have been pushing too.

Separately, a call for tariffs on foreign oil from Saudi Arabia and Russia, whose high production has hurt U.S. prices, has support among oil state lawmakers but is seen as too heavy a political lift.

More likely, critics of Saudi Arabia see language in the next defense authorization bill to back troop pullouts from the kingdom if it does not pay enough attention to U.S. needs on pricing and production (Greenwire, April 20).

A recent production cut by OPEC nations and Russia has failed to solve the global oil glut, but the president sees improvement down the road.

The White House and congressional Republicans will try again to get billions of dollars needed for filling up the Strategic Petroleum Reserve with domestic crude after Democrats kept it out of the first stimulus package.

The Energy Department says $3 billion would buy enough oil to fill to capacity the 714-million-barrel stockpile, which is stored in underground salt caverns in Texas and Louisiana.

Producers say that filling the SPR alone won’t end the glut of domestic crude but that it would provide modest relief and make the nation less dependent on foreign oil.

House Democrats and environmental groups, which successfully opposed the move as an oil bailout last month, will once again argue it’s unneeded and call for more renewable energy production.

But more moderate Democrats could hold the key as they have not ruled out a possible deal on the SPR if it were to come with extensions of clean energy tax breaks sought by renewable companies and environmental advocates.

Some advocates and lawmakers believe a similar accord could emerge in the next stimulus to renew and expand those credits in a stimulus in exchange for broad aid to energy companies.

A top priority for Democrats and greens on any tax credits would be extending safe harbor deadlines for renewable energy tax credits to allow projects delayed by the crisis to claim incentives.

Also, Democrats are largely on board with efforts by wind and solar industries to extend their specific breaks, arguing that as renewable energy projects are delayed, they face tens of billions of dollars in losses and that as much as a quarter of the nation’s 450,000 renewable energy industry employees could be laid off.

Republicans, however, are not united on the terms of trading energy aid for tax extenders, with some signaling they don’t want any more breaks.

Environment and Public Works Chairman John Barrasso (R-Wyo.) and several Republicans last week warned in a letter to congressional leaders that extending renewable credits could prove devastating for baseload power sources like coal and nuclear. They said, "It’s time to let them expire."

While a tax deal is far from certain, the back-and-forth over energy breaks signals the issue is likely to come up in the next round of stimulus talks.

Coal companies, led by the National Mining Association, too are likely to make another push to cut a federal excise tax on coal production that is used to pay for cleaning up abandoned mines and treating victims of black lung disease.

Mining companies say they need relief amid the pandemic, but so far Congress has sided with advocates for miners who say the tax dollars are desperately needed for medical treatment.

A long-delayed massive cash infusion into the nation’s infrastructure may have to wait a little longer despite support from both sides of the aisle and the White House.

"While I’m very much in favor of doing some of the things that we need to do to meet the needs — clean water, more broadband and the rest of that — that may have to be for a bill beyond this," House Speaker Nancy Pelosi (D-Calif.) said earlier this month.

Barrasso signaled last month that he wanted to include the chamber’s $287 billion highway bill, S. 2302, in the next coronavirus relief package, but he also said the issue would likely wait.

Senate Majority Leader Mitch McConnell (R-Ky.) has put off talk of another major bill and ridiculed Democrats for wanting to attach things he sees as nongermane (E&E Daily, April 6).

Some senators hoped to pay for the infrastructure measure by imposing new fees on electric vehicles and commercial trucks, as well as by indexing federal fuel taxes (E&E Daily, Feb. 14).

But the conversation on pay-fors has shifted as the economy sours, said Rebecca Higgins, a senior policy adviser for Democrats on the EPW Committee.

"There had been some discussion about increasing user fees by adding a new fee potentially on trucks or on some form of freight movement and an electric vehicle fee. … It doesn’t seem like there’s any bipartisan appetite to take that path because I think that the economic downturn makes that much less likely," Higgins said during a webinar last week hosted by the Transportation Research Board.

"At this point, I don’t think there’s a clear consensus on a set of user fees that would be acceptable. And of course we’ve also had … large amounts of money that have been unpaid for," she added.

Progressive lawmakers and green groups believe the pandemic underscores the need for action on a long list of environmental justice issues to keep Americans healthy and less susceptible to contracting the virus.

"Americans under orders to shelter in place should have power, heat, and a safe environment," 15 Senate Democrats in the Senate Environmental Justice Caucus recently wrote to their chamber’s leaders in a detailed seven-page letter.

The letter outlined four areas that they would want to spend tens of billions more on in the next stimulus package to help vulnerable Americans better navigate the pandemic.

Many moderates are almost certain to balk at the scope of the plan, while conservatives seem sure to mock it as the latest version of the "socialist" Green New Deal.

Indeed, a push by House Democrats to attach carbon reduction provisions to aid to airlines in the first stimulus was dropped amid solid Senate resistance.

But more modest environmental measures could fly. For example, more than 100 House and Senate Democrats have called for passing legislation that would prohibit turning off utility services during the pandemic for unpaid bills, arguing clean water is critical to prevent the spread of the virus (E&E Daily, April 20).

Despite White House resistance, the program enjoys bipartisan support from lawmakers who see it as a way to help those struggling and limit losses to utilities.