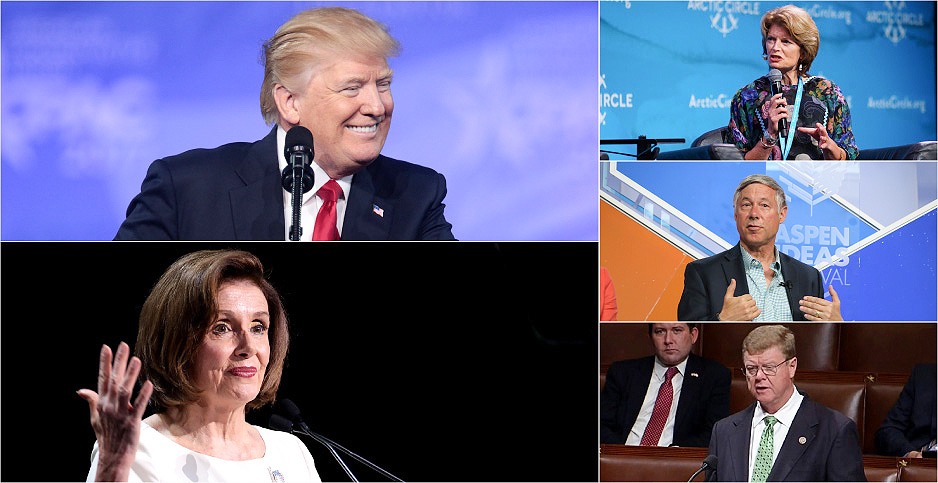 A widening House impeachment inquiry that already has ensnared Energy Secretary Rick Perry could have a major impact on Capitol Hill legislating this fall and may force some tough decisions for leading energy and environmental lawmakers in coming weeks.

Here are some questions to consider about the ongoing investigation of whether President Trump held up aid to Ukraine to try to force the central European nation to launch a corruption probe aimed at former Vice President Joe Biden.

Will anything get done?

Congressional Republicans continue to needle Democrats daily that the impeachment inquiry will sink any efforts to pass legislation.

"Sadly, it’s the American people who are hurt the most by this erratic, unfair impeachment because Democrats are more interested in tearing down this president than they are in building up this nation," said House Minority Leader Kevin McCarthy (R-Calif.) last week.

Democrats argue that Trump’s brazen behavior in recent weeks has forced their hands on an impeachment inquiry.

"The actions taken by the president over the past two weeks show a defiance of our Founders, with a total disregard for their wisdom and the U.S. Constitution," Speaker Nancy Pelosi (D-Calif.) wrote to her caucus last week.

"The president will be held accountable," she said. "When it comes to impeachment, it is just about the facts and the Constitution."

Pelosi said Democrats are also focused on legislating. "During this difficult time, we must continue our strong legislative agenda which is set at the kitchen table of America’s working families," she wrote.

While the House Democratic majority’s priorities are at odds with those of the GOP-led Senate, upcoming deadlines and pressure from outside interest groups ensure that talks will continue this fall on trade, spending and tax matters (see related story).

Perry will have to decide whether he wants to provide information to Democratic investigators or risk adding to concerns the Trump administration is blocking the investigation.

Last week, Democrats subpoenaed records and communications related to Perry’s meetings at the White House as well as in Ukraine and Poland in recent months tied to the Ukrainian energy sector and a possible push to reform it.

Democrats seemed focused on whether the Trump administration via Perry sought to push for an investigation of Burisma Holdings Ltd., a gas company that hired Biden’s son Hunter five years ago.

An Energy spokesman has said the department’s general counsel is reviewing the request, although the White House has repeatedly said administration officials should not cooperate with the probe.

Democrats, who are hoping to move quickly on impeachment, might not force the issue in court if Perry does not comply.

Instead, they have indicated that any refusal by administration officials to submit to congressional queries could build their case for charging Trump with obstructing justice.

It also remains to be seen how long Perry, who has been the subject of resignation rumors for months, will remain in the post if he’s pulled further into the investigation.

What lawmakers will become pivotal?

Former Energy and Commerce Chairman Fred Upton (R-Mich.) is one of the few House Republicans to signal support for an impeachment inquiry.

Upton, who is widely respected after three decades in the House, could offer some cover for other lawmakers who might be open to the investigation.

"I’m not for the formal, you know, the impeachment inquiry that came up last week, but it is the right of any committee. … I think there are legitimate questions that have to be asked and people are going to be required to answer them. You need to know what the answers are," Upton said recently, according to The Washington Post.

His move only adds to the uncertainty about whether he will seek an 18th term in 2020, a decision Upton has said he will make next year.

Supporting an inquiry could signal Upton has nothing to lose as he heads for the exits and thumbs his nose at a president he refused to endorse in 2016.

Or his maneuvering might suggest he’s bracing for a tough battle and wants to align himself with voters in his southwestern Michigan district that has grown more Democratic.

Also worth watching is Rep. Mark Amodei (R-Nev.), an appropriator who focuses on land issues who earlier seemed to signal support for the inquiry, only to walk those remarks back after a GOP backlash.

If the House GOP wall of support cracks on impeachment, the outspoken Amodei could be one of the first to come out.

If Trump is impeached and there is a Senate trial, Energy and Natural Resources Chairwoman Lisa Murkowski could find herself once again a pivotal figure in a partisan fight.

The Alaska Republican notably broke with the White House last year on the Supreme Court nomination of Brett Kavanaugh and has shown a willingness to vote against her party.

She famously called for Trump to "step aside" as the party’s nominee in 2016 after crude remarks he made about women surfaced.

Murkowski, for now, is only saying she finds the partisan nature of the impeachment fight troubling.

"What I find equally troubling is that even before there has been any considered review, that people have decided," Murkowski said at an Alaska health event last week. "There is either ‘Absolutely, you must get rid of him tomorrow’ viewpoint or ‘He must stay in, and no questions asked.’"

On the other side, Sen. Joe Manchin (D-W.Va.), a conservative Democrat who hails from a state where Trump is popular, will likely be pressed to support a president with whom he’s closely aligned on energy policy.

Manchin, the top Democrat on the Energy and Natural Resources panel, has said he’s open to the inquiry but has warned against jumping to conclusions.

A Senate trial could also be tough for a trio of Republican senators, Susan Collins of Maine, Cory Gardner of Colorado and Thom Tillis of North Carolina, all of whom face competitive elections next year in swing states.

What comes this week?

House Democrats have been able to maintain momentum for impeachment because fresh revelations about Trump’s conduct with Ukraine have emerged almost daily.

Several current and former administration officials will give closed-door depositions this week that could provide more fodder for the inquiry.

None will be more scrutinized than Thursday’s appearance by U.S. Ambassador to the European Union Gordon Sondland, who was closely involved with White House efforts to hold up Ukraine aid.

Sondland was cited in text messages, traded among senior diplomats over the summer, saying Trump saw "no quid pro quo" between aid to Ukraine and an investigation of the Bidens.

But several media reports say Sondland, who has bucked the administration by agreeing to testify, will tell lawmakers he cannot be sure if Trump was being fully truthful.

If Sondland turns on Trump, it would be a major blow to the president’s claim that he was not seeking to trade aid for an investigation of a political rival.