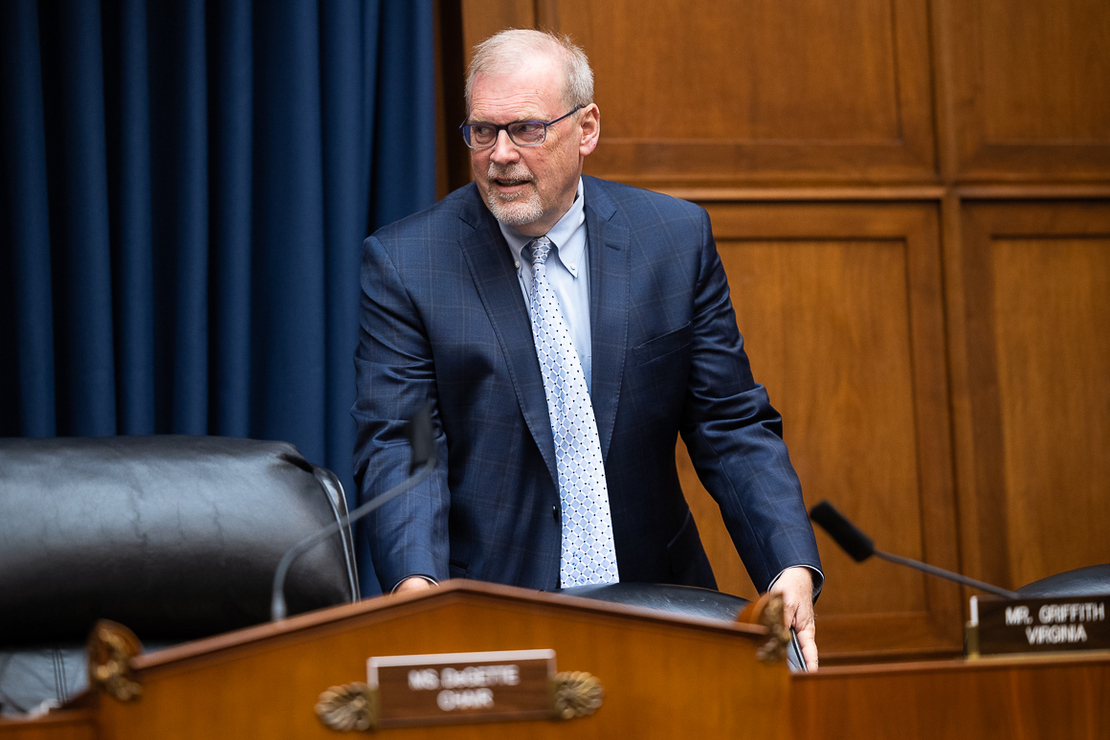 Virginia Rep. Morgan Griffith is the top Republican on the Energy and Commerce Subcommittee on Oversight and Investigations. Francis Chung/E&E News

Republican lawmakers have made clear which policies and people they want investigated. For nearly two years, GOP committee chairs have fired off dozens of letters to agencies seeking information. Republicans will now have subpoena power to demand cooperation.

“We will devote the resources necessary for this House to go toe-to-toe with the Executive branch, especially as it pertains to oversight and holding the Biden administration accountable for its mismanagement of our country,” Republican leader Kevin McCarthy (R-Calif.) said in a Dear Colleague letter last week announcing his bid for speaker of the House.

Over the summer, GOP lawmakers on both the Natural Resources and Energy & Commerce committees offered a preview of their 2023 efforts. Using a procedural tactic known as a “resolution of inquiry,” they forced failed votes on Republican-led efforts seeking documents and communications on a host of administration actions. Those actions included domestic fossil fuel production, public lands leasing, energy reliability and energy costs, among other areas.

Here’s a look at some of the areas where lawmakers are primed to launch probes:

Republicans have hammered Democrats on gasoline prices over the past year and during campaign season. Their main argument: The Biden administration is actively undercutting domestic oil and gas production.

They have criticized the cancellation of the Keystone XL pipeline, the pace of permitting for new oil and gas leases on federal lands, and the formation of the new five-year offshore leasing program.

Thus far, Republicans have been met with indifference from the administration. They’re looking to change that.

“We’ve sent a lot of letters over to the administration that have gone unanswered,” House Natural Resources ranking member Bruce Westerman (R-Ark.) said earlier this summer.

Oversight Committee Republicans released their own report last week, in which they allege the Biden administration has not done enough to support the development of domestic oil and gas.

In the lead-up to the election, Republicans have criticized the administration’s depletion of the Strategic Petroleum Reserve to bolster global supplies, arguing that the move to lower prices has endangered national security (Energywire, Oct. 24).

Energy and Commerce Subcommittee on Oversight ranking member Morgan Griffith (R-Va.) indicated his subcommittee was unlikely to focus much on the producer side of the equation as Democrats have for much of 2022.

Instead, he says he wants to investigate what he sees as an overemphasis on renewable energy research and development at the Department of Energy at the expense of fossil fuels.

“We don’t have parity,” Griffith said. “We’re putting most of our external, most of our eggs into the basket of renewables. And I’m not saying that we should not be doing that. Let’s get paid. Let’s figure out how to use our oil or coal or natural gas, because we got lots of it.”

Now that Democrats have lost control of the House, agencies are expected to ramp up climate rules to bolster infrastructure and clean energy laws enacted over the past two years.

But Republicans could slow that rulemaking through oversight hearings and voluminous document requests (E&E Daily, July 1).

She has also raised issues with climate goals set by administration officials, including the social cost of carbon metric.

“There’s a lot coming out of the White House, and I have called this into question repeatedly in committee on certain carbon goals and how we are going to meet it,” Capito said earlier this summer. “They never really tell you what you have to do to get there.”

Once finished, the disclosure rule is almost certain to face a Congressional Review Act challenge, even if the White House ultimately holds the veto pen.

“As I say to [JPMorgan Chase & Co. CEO] Jamie Dimon and [Goldman Sachs Group Inc. CEO] David Solomon and [Citigroup Inc. CEO] Jane Fraser and all the rest … if there’s a lot of noise in your left ear, I’m going to be the noise in your right ear,” Sen. Kevin Cramer (R-N.D.) said earlier this summer.

The search for Solyndra 2.0

Republicans are seeking a new renewable energy boogeyman similar to the failed solar energy company Solyndra, which received more than $535 million in federal loan guarantees (Greenwire, Oct. 13). They say they intend to comb through a host of infrastructure and clean energy projects set to receive funding by the Biden administration from the bipartisan infrastructure law and Inflation Reduction Act.

In total, the reconciliation package passed by Democrats included some $369 billion in climate- and clean-energy-related spending. The infrastructure package added nearly $100 billion more in energy and environment spending. That money is already in the initial phases of going out the door.

Top committee Republicans in the Senate and House have already sent initial inquiry requests for additional oversight into how DOE intends to implement the tens of billions of dollars provided by the two laws for its loan guarantee program.

“I think you can assume that there’s going to be misplacement of funds,” former Rep. Cliff Stearns (R-Fla.) told E&E News about the money coming from the two major new laws. Stearns chaired the House Energy and Commerce Subcommittee on Oversight and Investigations when the GOP was scrutinizing the Solyndra loan guarantees.

“It’s just a fact of life — the government is not the most efficient. They’re not looking for competence,” he said. “They’re looking to give the money out, but they don’t look back at how it’s being spent, whether it’s worthwhile.”

House Republicans may also be eyeing additional scrutiny on environmental and climate groups who are advising and working closely with the Biden administration.

The motivation appears inspired, in part, by the constant pressure Democrats applied to oil and gas groups as well as long-standing but unsubstantiated accusations that some environmental groups have indirectly received Russian funding to oppose fossil fuel production.

“We’re concerned that this administration has been making energy policy based on communication and orders from some climate activists and activist organization,” Comer told reporters earlier this summer. “So, we’re going to dig into that on the oversight because the Green New Deal is not going to work out very well for the American consumer at the gas pump.”

Republican lawmakers on Energy and Commerce already launched in the immediate aftermath of Russia’s invasion of Ukraine an inquiry into environmental groups’ ties to Russia based on allegations previously investigated by Republicans. Such a probe could be a basis for a new inquiry.

In a letter led by E&C Committee ranking member Cathy McMorris Rodgers (R-Wash.) to the League of Conservation Voters, the Natural Resources Defense Council and the Sierra Club, the lawmakers allege that donations received by the green groups from the Sea Change Foundation since 2006 have amounted to a funneling of Russian-backed dollars to undermine U.S. fossil fuels (E&E Daily, March 11)

The Sea Change Foundation has repeatedly denied receiving any funds or having any connection to Russia in the past, as have each of the environmental groups the Republicans pressed for information. Environmental groups once again flatly denied the accusations in the probe’s aftermath.

Still, the March letter had signatures from every E&C Energy Subcommittee Republican — a possible sign of the unanimity of the committee to continue pursuing the investigation.

“I don’t want to tar them with that brush, but clearly the Russians may be doing that,” Griffith said earlier this summer. “We need to know. … Russian oligarchs don’t get to tell us what to do.”

Republicans have also taken a keen interest in Department of Energy actions that led to U.S. battery technology being deployed in China. On Election Day, McMorris Rodgers, led a letter with Wyoming Sen. John Barrasso, the top Republican on the Energy and Natural Resources Committee. The duo called on the Government Accountability Office to launch a probe into the matter (E&E Daily, Nov. 9).

National parks are another area ripe for oversight. Westerman has called for a closer look at the funding distribution used by Interior to fund deferred maintenance projects across the national parks, as outlined in the recently passed Great American Outdoors Act.

“That was a bill that I supported, and it was supposed to take funding and distribute it out across the country,” Westerman said in an interview this summer. “We saw a lot of funding go to a lot of big projects, a lot of funding to projects here in the Beltway, and I don’t think that was the intent of Great American Outdoors Act.”

“We’ve asked for explanations of that,” he added. “We haven’t gotten any.”

Separately, Democrats and Republicans alike have said they’re concerned with implementation of the law, especially when it comes to bottlenecks in land acquisition (E&E Daily, Feb. 10).