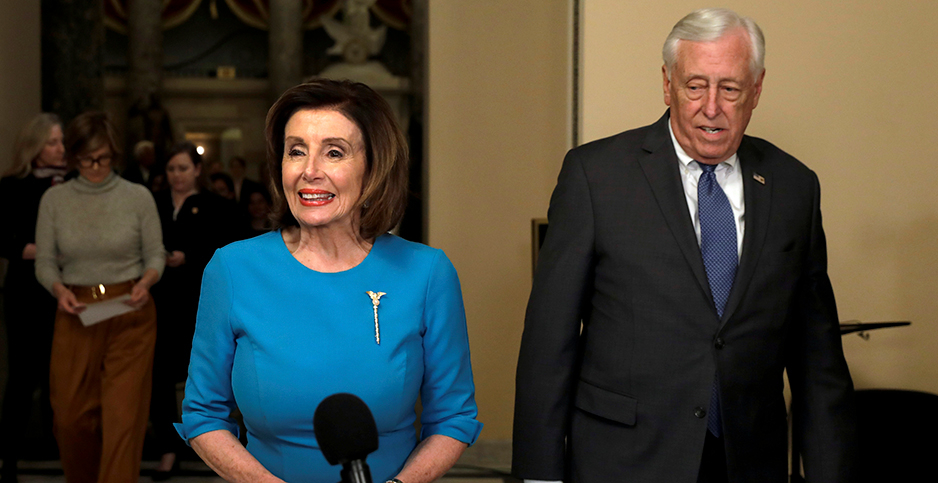 Even backers of the House’s $3 trillion pandemic aid package say it will have to change significantly if it’s to become law. That means intense lobbying and negotiations will only increase.

The House Rules Committee will meet today to debate the legislation, H.R. 6800, the largest bill yet to address the COVID-19 virus. House lawmakers are set to return tomorrow to pass it.

Progress on the measure will then slow down, as tough negotiations lie ahead with Senate Republicans and the White House.

Energy and environmental issues will be part of those talks, including funding and provisions already in the House bill as well as other matters that could emerge. Here are five issues to keep an eye on:

No single pandemic aid program has generated more attention than the Paycheck Protection Program, which has provided more than $500 billion in loans to small businesses in recent weeks — including more than $5 billion to energy firms and utilities.

The House bill would extend the program, which is due to run out on July 1, through the end of the year. It would not provide any additional funds because more than $100 billion remains from an emergency PPP infusion Congress approved last month.

Republicans are likely to agree on extending the program until the end of year, and some say the July expiration of PPP could be the Senate’s deadline for passing another major stimulus.

Still, a fight could emerge over a provision Democrats added that would make all nonprofits eligible for PPP, including lobbying groups and trade associations.

And while the House bill would not require full disclosure of loan recipients, proposed expanded PPP reporting requirements, including one related to bank lending fees, could run into GOP opposition.

Progressive Senate Democrats, meanwhile, are likely to push for adding a provision that would block recent efforts by the Federal Reserve to make it easier for fossil fuel companies to tap the Main Street Lending Program, a multibillion-dollar pandemic loan initiative for midsize companies.

A Senate showdown could be coming over whether to approve billions of dollars to fill the nation’s Strategic Petroleum Reserve in exchange for renewable tax breaks.

Moderates from both parties have floated the potential deal that could emerge in the Senate. The House bill does not contain any of the $3 billion sought by the White House for buying SPR crude, nor does it specifically address the renewable energy production and investment tax credits.

Environmentalists lamented the lack of any action to preserve clean energy jobs in the House legislation, circulating a new analysis yesterday. It warned that nearly 600,000 jobs have already been lost and an additional 250,000 could be gone by June without congressional action (see related story).

"The $3T bill just released by the House contains many important priorities for the country, and though it includes a lengthy tax section, it unfortunately leaves out COVID-19 related assistance that could save clean energy jobs. We cannot afford to let the clean energy industry backslide," the Sierra Club said in a statement.

But environmental groups aren’t willing to make a deal on clean energy support at any cost. Several sent out press releases yesterday blasting House Majority Leader Steny Hoyer (D-Md.) as a sellout to "Big Oil" for saying earlier this week that he backs filling the SPR (E&E Daily, May 13).

Hoyer’s comments were seen as something of a trial balloon for a Senate deal involving taxes and buying crude.

Still, a compromise can’t be ruled out, with senators from both parties eager to claim they are protecting jobs ahead of this fall’s elections.

The pandemic legislation is more than 1,800 pages, but not once does the text contain the word "climate." Nor does the bill seek to use the pandemic aid as leverage to push for curbs on pollution as some greens had hoped.

House Democrats held back after an early version of the last major pandemic response bill — the Coronavirus Aid, Relief and Economic Security Act — was criticized by lawmakers from both parties for seeking to limit carbon emissions from airplanes in exchange for the carriers’ getting loans.

Republicans derided it as a bid to force a Green New Deal-style provision into law during a national emergency. House Democratic leaders abandoned the emissions effort, and the loans went ahead.

No similar efforts to tie aid for businesses and state and local governments to climate action — such as corporate disclosures in exchange for federal support — are in the new legislation.

Environmentalists and Senate Democrats may grouse about the climate being ignored, but they may have to settle for the House bill’s $50 million in new EPA environmental justice grants.

Those grants could be used to study connections between exposure to pollution and the transmission of the coronavirus, supporters say.

A push to make changes to the nation’s oldest wildlife conservation law to prevent wildlife-borne diseases, known as the Lacey Act, may not fly in the Senate.

House Democrats are proposing the first significant change to the Lacey Act in more than a decade to allow listing species that pose a risk to human health as "injurious," which would prevent their import or transport.

While few question the effectiveness of the Lacey’s Act original anti-poaching provisions, conservatives say recent changes, which have extended its reach to plants and trees, leave businesses more open to liability.

Senate Republicans have made pandemic liability protections for businesses a priority, and Lacey Act changes might fall as part of that push.

One potential compromise could allow for more than $100 million in funds in the House bill for the U.S. Geological Survey and the Fish and Wildlife Service for fighting and preventing wildlife-borne diseases.

Congress is likely to dole out only a fraction of the $2 trillion in infrastructure spending once floated as part of a pandemic plan.

House Democrats backed off from far more ambitious transportation plans to instead focus on the need for immediate aid to state and local governments. Republicans who have been weary of how a large-scale building program would be funded aren’t likely to object.

More modest investments in the House bill that would provide $15 billion for highway infrastructure programs and $15.75 billion for public transit are likely to survive and could even increase a bit. Transportation spending is generally popular in both parties, especially in an election year.

A more partisan fight could emerge between the two sides over a House provision that would require passengers and workers riding Amtrak, airplanes and most public transit to wear face masks during the pandemic.

The use of protective coverings by the federal government could become a flashpoint among some on the right who say state and local officials should set social distancing guidelines.

Separately, top lawmakers in both the Senate and House are moving forward with water and transportation infrastructure measures pending before the pandemic hit (Greenwire, May 6).