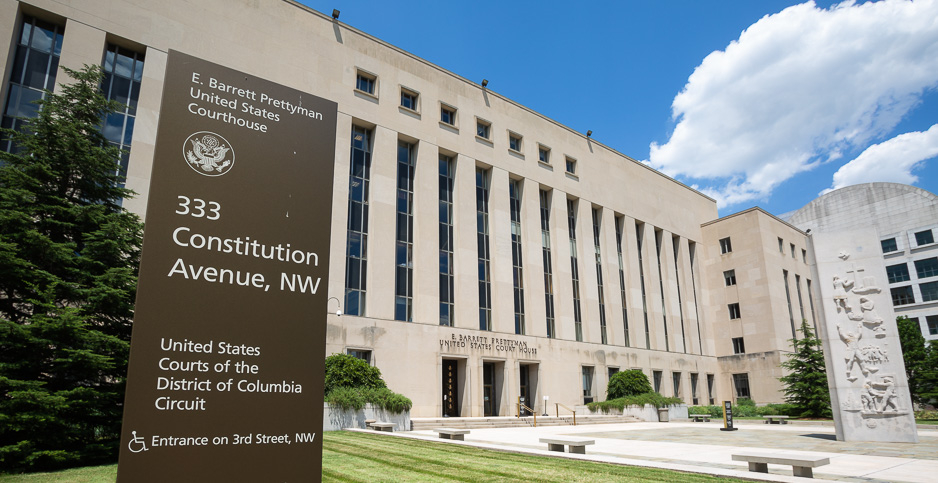 Appeals court judges in Washington will wade into disputes over border wall funding, trophy hunting, and other key environmental and energy issues, beginning next week.

The U.S. Court of Appeals for the District of Columbia Circuit could even overturn its own precedent when it reexamines federal energy regulators’ process for approving projects like natural gas pipelines.

The D.C. Circuit generally hears arguments between September and May, and the court could add more cases to its calendar before it slows down for the summer.

Two cases the court is unlikely to hear before the second half of this year are challenges to the Trump administration’s Clean Power Plan replacement and its decision to block California from setting stricter limits on greenhouse gas emissions from vehicles. After declining to change its pace on either case, the D.C. Circuit set a July 30 briefing deadline in the Affordable Clean Energy rule litigation and instructed parties involved in the fight over California’s tailpipe standards to propose a briefing schedule by March 5.

Here’s a look at five important environment and energy cases the D.C. Circuit will take up in the coming months.

The D.C. Circuit will next week consider a complaint filed by federal lawmakers after President Trump overrode their decision declining to issue additional funds for construction of a barrier along the southern border.

Members of the House of Representatives say the Trump administration’s 2018 announcement that he would spend $8.1 billion on a border wall — after Congress appropriated only $1.4 billion for the project — was an "extraordinary violation" of the Constitution’s appropriations clause.

The U.S. District Court for the District of Columbia dismissed the lawsuit on the grounds that the House could not demonstrate injury from the president’s decision.

Federal attorneys have also appealed district court losses on the government’s reallocation of military funds for the project, and a petition challenging the Trump administration’s ability to waive environmental laws to build the wall is currently pending before the Supreme Court.

In Physicians for Social Responsibility v. Wheeler, the D.C. Circuit will consider whether EPA improperly prohibited members of its scientific advisory committees from receiving agency funding — a policy that resulted in the removal of scientists from those panels.

EPA implemented the ban in 2017 on the grounds that it would protect the objectivity of the Clean Air Scientific Advisory Committee and other panels. But opponents say the agency’s ethics rules already require agency grantees to recuse themselves under the "rare" circumstances that their committee considers an issue related to their funding.

Environmental advocacy groups have lost several challenges on this issue, including the case that preceded the D.C. Circuit appeal, but the Natural Resources Defense Council won a similar lawsuit this week in the U.S. District Court for the Southern District of New York.

In a rare full-court rehearing this spring, landowners along the path of the Atlantic Sunrise pipeline will challenge how an independent agency considers complaints about its use of eminent domain.

Allegheny Defense Project v. FERC has the potential to overturn D.C. Circuit precedent on FERC’s pipeline approvals, a process that last year drew a scathing rebuke from Judge Patricia Millett, an Obama appointee to the court.

Critics of the practice say it infringes on due process rights and can result in companies clearing land and laying down pipe before landowners are able to bring their objections before a court.

Pipeline builders have argued that the only right property owners are guaranteed under the Constitution is to receive just compensation for land seized for public use.

A rancher whose family has been embroiled in a long property rights battle with the federal government will take his case to the D.C. Circuit later this year.

In Bundy v. Sessions, Nevada rancher Ryan Bundy contends that officials from the Bureau of Land Management and FBI repeatedly violated his constitutional rights "[u]nder the guise of collecting grazing fees, an alleged and unverified debt." The fight over the fees culminated in a 2014 armed standoff with BLM, and Bundy was later incarcerated for two years.

Bundy’s attorneys are asking the D.C. Circuit to reverse the lower court’s decision to toss his case, which claims that the government’s efforts to "make an example" out of his family were driven at least partially by prejudice against his Mormon faith.

Center for Biological Diversity v. Bernhardt challenges a 2017 move by the Interior Department to allow imports of elephant and lion trophies from Zimbabwe.

Environmental groups contend that this "180-degree turn" from prior policy by Interior’s Fish and Wildlife Service was in direct violation of a December 2017 D.C. Circuit ruling that "enhancement findings" should be subject to formal notice and comment under the Administrative Procedure Act.