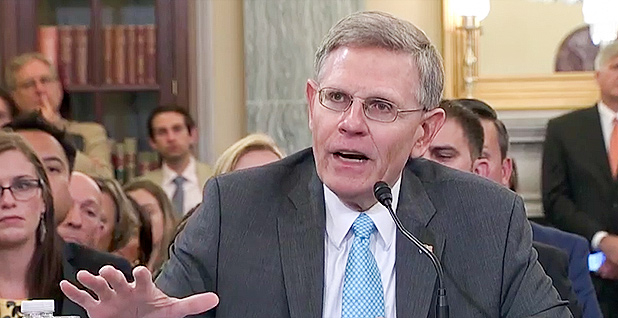 Kelvin Droegemeier, the president's nominee to head the Office of Science and Technology Policy, during his confirmation hearing. Senate Commerce, Science and Transportation Committee

Human-driven climate change may not be happening. Sexual harrassment must "stop." Cybersecurity is one of the gravest threats to our nation.

Those were some of the arguments made yesterday at a hearing of the Senate Commerce, Science and Transportation Committee to consider White House science nominees.

Much of the panel’s attention was on Kelvin Droegemeier, the pick to be director of the Office of Science and Technology Policy, in part because President Trump has gone longer than any modern president to tap someone to lead OSTP, which oversees federal science policy on issues ranging from oceans to artificial intelligence.

Outside the hearing room, Inhofe said, "Oh, yes" when asked if Droegemeier’s role would change compared to the Obama administration, particularly on the climate issue.

"He’s not going to use the platform for political purposes as happened during the Obama administration," said Inhofe, who has called global warming a "hoax."

Yet Democrats who have expressed worries about Trump’s science policies also looked hopefully to Droegemeier, a former University of Oklahoma extreme-weather expert.

Sen. Maria Cantwell (D-Wash.) suggested she would like to see Droegemeier shape policies to mitigate the costs of climate change.

She referred to a Government Accountability Office report she requested with Sen. Susan Collins (R-Maine) this year that found global warming already is costing taxpayers billions of dollars.

"So we’d like to see more policies that are going to mitigate that," she said. About Droegemier, she said "we’re going to submit some questions. We’ll find out, but obviously we need people."

Here are five takeaways from the hearing:

Droegemeier repeatedly was asked by lawmakers about his views on climate change, but his responses sometimes left more questions than answers.

To Sen. Tom Udall (D-N.M.), Droegemeier vowed that he was "very excited" to address climate change and emphasized the need to rebuild better after extreme weather events (Greenwire, Aug. 23). Similarly, he told Nelson, who asked how he would mitigate the risks from heat-driven floods and other disasters, that we have to understand the "underlying issues."

Yet Droegemeier did not push back when Sen. Ted Cruz (R-Texas), who has questioned human-driven warming, asked if there was one permissible or acceptable view on the issue. Cruz voted against a 2015 amendment stating that climate change is real and caused by human activity.

Droegemeier told Cruz he knew there were multiple views and that he welcomed them. He also said he was aware of studies cited by the senator that question satellite data but didn’t mention they diverge from mainstream climate science.

"I get very concerned and I’ve read articles where they say this particular viewpoint, science not climate necessarily, is absolutely settled. Science rarely supplies immutable answers about anything," Droegemeier said.

He compared the issue to scientists thinking they once fully understood atoms, before discovering quarks and subatomic particles.

The Oklahoma meteorologist’s comments concerned some climate scientists like Pennsylvania State University’s Michael Mann, who initially had praised Droegemeier as an "excellent scientist." Mann questioned why the nominee focused on uncertainty of climate models and did not emphasize the severe risks of warming.

"His only prescription seemed to be ‘get the climate and weather communities working together’ when in fact that is already happening," Mann said in an email after the hearing.

During the Obama administration, climate change was a focus of OSTP, and former OSTP Director John Holdren played an active role in international climate discussions and influenced funding decisions on climate research.

It’s unclear how much Trump plans to make his OSTP director part of the inner White House circle, although the office is tied to climate issues via work on the National Climate Assessment and subjects like ocean policy.

The climate issue also led to a tense exchange between Sen. Ed Markey (D-Mass.) and Trump’s choice to be deputy administrator of NASA, James Morhard.

NASA Administrator Jim Bridenstine famously flipped his views on climate change when he was picked for his job, and the man nominated to be his deputy hinted that he has a less authoritative view on established science.

"I believe the climate is changing and that man has a significant impact on it," Morhard told the panel yesterday.

But when pressed by Markey to say whether he thinks humans are the primary driver of climate change, Morhard said he could not "speak authoritatively on that."

That didn’t satisfy Markey, who accused him of "hedging" on the issue.

Bridenstine, once a climate skeptic, has given more conclusive statements about climate science since he was confirmed to lead NASA.

"The National Climate Assessment that includes NASA and that includes the Department of Energy and it includes NOAA has clearly stated that it is extremely likely, that’s the language they used, that human activity is the dominant cause of global warming, and I have no reason to doubt the science that comes from that," Bridenstine told the Commerce Committee in May (Climatewire, May 24).

Morhard did say that he would protect NASA scientists from political interference.

"I certainly, if confirmed, would work to assure that there’s no distortion or disregard for science and scientific evidence," he said. "If we compromise on it, we won’t have science, so I can assure you that I think it’s critical that there is no influence on the outcome on the scientific method."

At several points, Droegemeier seemed to suggest a split with the views of Trump administration officials without saying so directly.

He expressed concern, for example, about funding research and the possibility of other countries surging ahead of the U.S. with new technologies, echoing rhetoric from Democrats, who have slammed Trump’s budget proposals to cut Department of Energy research funding.

"We really are leading despite what you see in terms of the dollar of other countries, but we’ve got to watch our dollars because they are on our heels," Droegemeier told Udall, who asked how the U.S. can continue to be a global leader.

Droegemeier also pushed several times for research to move into the "applied" arena, or for "applied" research to be supported. He did not detail what he meant, but the administration in general has pushed for DOE to move more toward "basic" or early-stage research.

At the same time, Droegemeier said yesterday he wants to reduce "regulatory burdens" on scientists.

Additionally, he said multiple times he was opposed to political interference with scientists, something the Trump administration has been accused of but denies.

"I can tell you that the ethical conduct of research with integrity, without political interference in the scientific process … is without question important. … There is no other way to do it," Droegemeier told Nelson.

If that is compromised, "the foundations of research and the public trust kind of come undone," he said.

A Union of Concerned Scientists report published this month, which one senator noted, reported incidences of political meddling and censorship of federal scientists by political appointees (Greenwire, Aug. 14).

Droegemeier gave brief answers on a range of issues that could intersect with OSTP, including cybersecurity — which he called one of the gravest threats to the nation — and a White House innovation office headed by Trump’s son-in-law, Jared Kushner.

She asked Droegemeier if he would commit to getting a response to the letter, since he would be working closely with the innovation office as head of OSTP.

"Certainly innovation is very important, I’d be happy to be part of that team and work more collaboratively," he said.

Harassment has to ‘stop’

Earlier in the hearing, Nelson asked about a National Academies of Sciences, Engineering and Medicine report this summer that found widespread sexual harassment of women in science, engineering and medicine (E&E News PM, June 12).

Droegemeier said, "This kind of behavior is absolutely unacceptable. … This has to stop."

At OSTP, he said he hoped to continue a dialogue with all agencies that conduct research and perhaps promulgate similar ideas throughout the government.

There’s nothing more important than ensuring that we have safe environments, he said.