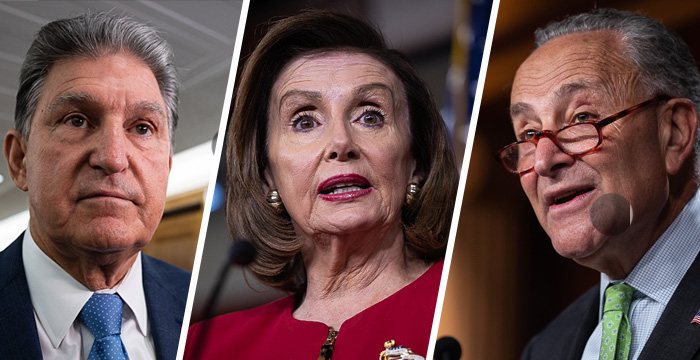 Negotiations over President Biden’s energy and environment agenda will center on the Senate this week after the House finished drafting its version of the $3.5 trillion reconciliation plan.

House panels held marathon markups on sections of the package in recent weeks, and the Budget Committee could weave it all together in the coming days. The Senate is unlikely to hold any markups and is instead putting together its work behind closed doors.

Democratic leaders have been cautious in setting a specific deadline beyond this fall for getting the package signed into law. On "Fox News Sunday" yesterday, House Budget Chair John Yarmuth (D-Ky.) predicted the House would “probably … slip past” Sept. 27, which is the date House Democratic leaders have promised Democratic moderates a vote on the more modest, bipartisan infrastructure bill the Senate passed over the summer.

Sanders also waved off suggestions that Democrats would have to adjust the top line, while Yarmuth and House Majority Whip Jim Clyburn (D-S.C.), appearing Sunday on CNN’s "State of the Union," both explicitly warned that the cost of reconciliation would, in all likelihood, decrease by the time it gets to President Biden’s desk for a signature.

These dynamics will play out amid larger debates on the substance of the reconciliation package, which will only intensify on Capitol Hill this week. Tax fights over expanding clean energy production and limiting emissions could dominate discussions.

Other climate spending initiatives, including the creation of a Civilian Climate Corps, are seen as likely to make it into whatever final accord emerges — but probably not without some behind-the-scenes griping and wrangling.

The House and Senate thus far have parted ways on repealing a suite of fossil fuel tax breaks — as Biden’s fiscal 2022 budget request and American Jobs Plan called for.

The $235 billion clean energy measure approved by the House Ways and Means Committee last week would largely allow fossil fuel tax incentives to continue. The bill does contain a key modification to the way foreign oil and gas drilling profits are taxed, changes that contribute to raising an estimated $106 billion over 10 years (E&E Daily, Sept. 14).

While applauding the long-term extensions of key incentives and addition of an assortment of new and expanded credits in the House bill, the League of Conservation Voters last week said repealing the fossil breaks “would deliver even larger overall emissions reductions that our children and families desperately need.”

That measure, which will be the foundation of the committee’s climate offerings for reconciliation, would end the expensing of intangible drilling costs, the percentage depletion allowance and master limited partnership treatment for certain fossil fuel projects, among other repeal provisions.

Observers see a long road for many of the repeal provisions, given the 50-50 Senate split and a number of Democrats who hail from oil-, gas- and coal-producing states.

Wyden pushed back on that notion on Thursday. “The fact is that people in fossil fuels are still going to be able to get all the tax breaks that other businesses get,” he said during an event sponsored by Evergreen Action. “They’re not going to get the billions of dollars of special breaks for fossil fuels.”

Wyden said discussions continue with House and Senate leadership and the Biden administration on tax matters but did not offer a timeline. “We’ll make some decisions,” he said.

On another key policy difference with the House, Wyden also indicated that he’ll continue to push to tie the availability of clean energy credits to emissions reductions, as opposed to the straight extensions contained in the Ways and Means bill.

“I feel strongly that we should be tying those tax savings to results — the results being actually reducing carbon emissions,” he said.

Despite the differences between the House and Senate bills on fossil fuels and credit availability, Wyden said Democrats in both chambers are “rowing in the same direction.”

“We want to fight climate change effectively,” he said.

Carbon pricing remains a wild card for reconciliation. Neither chamber’s clean energy tax bills contain a carbon tax, and it seems like a long-shot given the 50-50 split in the Senate.

However, the path for both carbon pricing and a complementary policy that has been floated as a reconciliation offset — a carbon border adjustment tariff — may be complicated by Biden’s campaign pledge not to raise taxes on any individuals making less than $400,000.

The White House refused to budge from that position in bipartisan infrastructure negotiations with senators over the imposition of user fees to pay for federal transportation programs, effectively nixing new proposed fees on electric vehicles and raising the federal gasoline tax.

While the carbon tariffs were referenced in a reconciliation memo distributed by Majority Leader Chuck Schumer (D-N.Y.) to Democratic senators in August, it was conspicuously absent from last week’s presentation to the caucus.

Also absent was any mention of a proposal offered by Senate Democrats last month that would impose a new tax on about 30 of the largest industrial emitters of carbon emissions that progressives in both chambers have pushed for reconciliation (E&E News PM, Aug. 4).

No single issue has drawn more scrutiny than Democrat’s proposed Clean Energy Payment Program. House Energy and Commerce Democrats backed a $150 billion CEPP in their reconciliation bill, which greens say is vital to meeting the White House’s goal of cutting carbon emissions in half by 2030.

Administered through the Department of Energy, the program would pay electricity suppliers that increase clean electricity by at least 4 percent over the previous year. Suppliers that don’t meet that mark would face fees based on their clean energy shortfall.

Senate Energy and Natural Resources Chair Manchin may be the biggest obstacle to including the CEPP after recently saying it “makes no sense at all” to make payments to utilities to accelerate the clean energy transition that could leave the nation’s grid vulnerable.

Investor-owned utilities, which provide about 70 percent of the country’s electricity, have generally supported the plan. However, late last week one of the nation’s largest utilities, American Electric Power, which operates two large coal plants in West Virginia, came out against the plan, echoing Manchin’s warning on reliability.

Even if CEPP is adopted in the Senate, the specifics of the plan could change to make allowances for natural gas as well as for more carbon capture technologies. Both were seen as largely shut out under the House version.

One of the thorniest tax fights could be over a tax on methane, a byproduct of natural gas production that’s a potent source of carbon. House Democrats backed a plan that would be assessed at individual oil and gas facilities that report methane emissions under the Greenhouse Gas Reporting Program.

House Republicans derided it as a natural gas tax that would be passed onto consumers, but failed in attempts to eliminate it altogether or bar it from applying to agriculture and public health facilities.

Senate Democrats are seen as likely to pursue the tax, but its contours could differ from the House. One option would be legislation, S. 645, championed by Whitehouse, that would place a methane emission fee on producers on a basin-by-basin basis.

Moderates see that plan as too sweeping and favor the narrower House version. Natural gas producers are likely to put up a fierce fight by arguing in part they are already taking voluntary steps to curb emissions.

A Civilian Climate Corps, championed by the White House and in the House legislation, is expected to make it into the Senate plan, too.

The Senate Democrats’ presentation suggested $30 billion would go toward the CCC, a green jobs placement and training program. It was not clear if all those dollars are for creating the CCC or if the figure also covers projects that would be carried out by the new federal workforce.

The House proposal would provide $14.5 billion for the CCC itself as well as an additional $35 billion for watershed and forest projects it would carry out. The White House had proposed $10 billion for CCC.

Republicans have pushed back on the CCC as a waste of money, duplicative of other federal efforts and competing against private-sector firms that would otherwise carry out the work.

Progressives, among them Sen. Ed Markey (D-Mass.), who called for more than $100 billion in spending for the CCC, will likely make the case for the higher figure but won’t resist a lower number that allows the program to begin.