5 key moments from the Democratic debates 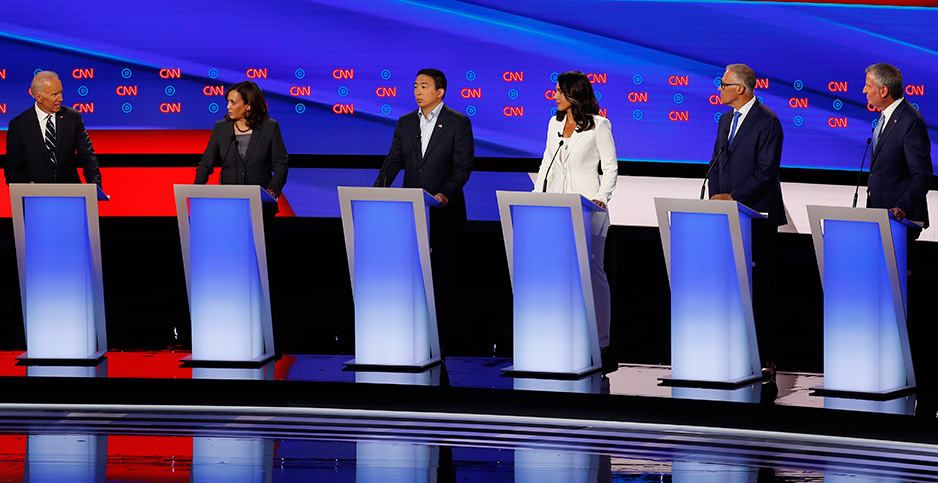 The Democrats running for president faced off for their second set of primary debates this week, providing opportunities to dig further into environmental and climate change policy.

The debates, aired on and moderated by CNN, showed more clearly the contrasts between progressives and moderates among the 20 presidential hopefuls who qualified for the contests, which were split into two events.

And while the CNN moderators only dedicated about 10 minutes each night to climate change, and brief mentions of the Flint drinking water crisis, the events showed some real differences among the candidates.

Inslee confronts Biden: ‘Your argument is not with me; it’s with science’

Numerous candidates targeted former Vice President Joe Biden when he was onstage yesterday, and his views on climate change didn’t get a pass.

Washington Gov. Jay Inslee, who presents himself as the climate change candidate of the race, took multiple jabs at Biden, both directly and indirectly, for a climate plan he argued is too centrist and not aggressive enough.

"These deadlines are set by science," Inslee said of the key dates in his climate policies, like eliminating coal from the electrical sector in 10 years and decarbonizing the grid in 15 years.

"Mr. Vice President, your argument is not with me; it’s with science. And unfortunately, your plan is just too late."

Later, when Biden said "we would work it out" in regard to whether fossil fuels would have a place in his presidency, Inslee responded, "We cannot work this out. The time is up; our house is on fire."

Earlier, Inslee took a veiled shot at Biden, saying in his opening statement that "middle-ground approaches are not enough," a reference to a May report by Reuters that said Biden would endorse a "middle ground" climate policy, before his platform was released.

Vermont Sen. Bernie Sanders was the most outspoken critic of the fossil fuel industry.

"We’ve got to ask ourselves a simple question: What do you do with an industry that knowingly, for billions of dollars in short-term profits, is destroying this planet? I say that is criminal activity that cannot be allowed to continue," Sanders declared on the debate’s first night.

It was indicative of how Sanders repeatedly and forcefully slammed the oil, natural gas and coal sectors, which he put alongside industries like banking and pharmaceuticals as his main rivals.

"Tonight, the fossil fuel industry continues to receive hundreds of billions of dollars in subsidies and tax breaks while they destroy this planet," he said in his opening statement.

But Sanders also wanted to dispel the notion, pushed by Montana Gov. Steve Bullock, that taking on fossil fuels would necessarily hurt workers.

"There ain’t nobody in the Congress who’s more strongly pro-worker than I am," he said of Bullock’s accusation. "So when I talk about taking on the fossil fuel industry, what I am also talking about is a just transition."

Booker on the Paris Agreement: ‘That is kindergarten’

"Nobody should get applause for rejoining the Paris climate accords. That is kindergarten," Booker said after Biden outlined the main pieces of his climate agenda.

"We have to go to far advance to make sure that everything from our trade deals, everything from the billions of dollars we spend to foreign aid, everything must be sublimated to the challenge and the crisis that is existential, which is dealing with the climate threat."

In reality, Biden has pledged to quickly work to increase nations’ ambitions under Paris.

"I would make sure that we up the ante, which it calls for," he said of the Paris Agreement’s framework. "I would be able to bring those leaders together, who I know, and I’d convene them in the White House, like we did in the nuclear summit. And I would raise the standard."

Former Maryland Rep. John Delaney and Bullock took leading roles as moderates on environmental policy and attempted to take on progressives such as Sanders and Massachusetts Sen. Elizabeth Warren.

The Green New Deal, Delaney argued, "ties its progress to other things that are completely unrelated to climate, like universal health care, guaranteed government jobs, and universal basic income. So that only makes it harder to do."

Delaney stood up instead for his plan that is centered on implementing a carbon tax, with a dividend that would be returned to taxpayers.

"That was introduced by me on a bipartisan basis," he said. "It’s the only significant bipartisan climate bill in the Congress."

"As we transition to this clean energy economy, you’ve got to recognize, there are folks that have spent their whole life powering our country, and far too often, Democrats sound like they’re part of the problem. We’ve got to make sure to aid in those transitions as we get to a carbon neutral world," he said.

Williamson on a ‘dark psychic force’

Author and activist Marianne Williamson got considerable attention for some of her statements, including an extended answer on what she would do about Flint and other cities affected by lead contamination in drinking water.

She directly linked the crisis in majority-black Flint to institutional racism and predicted that the problem wouldn’t have happened in Grosse Pointe, a whiter, richer city in Michigan.

"This is part of the dark underbelly of American society," Williamson said. "The racism, the bigotry, and the entire conversation that we’re having here tonight — if you think any of this wonkiness is going to deal with this dark psychic force of the collectivized hatred that this president is bringing up in this country, then I’m afraid that the Democrats are going to see some very dark days."