5 lessons for the Green New Deal … from Obamacare 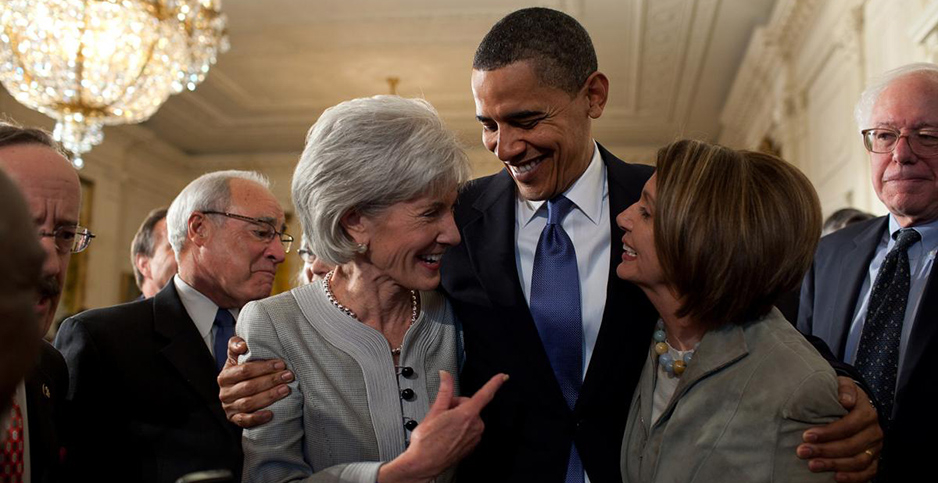 Few legislative efforts over the last 25 years compare with the grueling, monthslong battle to turn the Patient Protection and Affordable Care Act into law.

Even now, nine years later, the health care plan dubbed Obamacare stands as a testament to the fierce political divisions in the United States and the bare-knuckled gamesmanship needed to transform sweeping ambition into federal policy.

Which is to say, advocates of the Green New Deal had better buckle up.

Several veterans of the 2009-10 health care debate talked to E&E News and offered their perspective on what strategies Green New Deal activists might duplicate, which ones they should avoid and what challenges will be new to this fight.

A common thread was the opinion that the Green New Deal is miles away from becoming law and that its transformative vision of tackling climate change with a government-led jobs program is even more radical than President Obama’s aim to reform U.S. health care.

Even so, they said there were useful lessons to learn from the Affordable Care Act. Assembling a broad coalition is important. So is finding a backdoor to fix hiccups — major or otherwise — in what’s sure to be a sprawling piece of legislation.

Here are their five takeaways.

At the start of the health care fight, Obamacare architects faced challenges from across the political spectrum. There were moderates who feared costly, disruptive changes; liberals who demanded more benefits; and Republicans who just wanted to stop Obama.

Looming over them all was industry. Insurance, pharmaceuticals and others in the sector had disintegrated President Clinton’s health plan. They could sink this legislation, too — or, maybe, they could become an asset.

"There weren’t too many vested interests that took it on the chin," said Jonathan Gruber, an Obama administration adviser who helped shape the ACA as well as its Massachusetts precursor.

"The only true losers in the Affordable Care Act were very rich people who had to pay higher taxes and healthy people already buying individual insurance. … Put together, those groups were tiny," he said.

Democrats had dissuaded industry from allying with Republicans, denying the minority a potentially critical weapon in the health care fight.

The Green New Deal faces a steeper challenge, and some energy companies will fight it hard. But others might have a price at which their tolerance can be bought, especially if it offers them a path forward in a low-carbon economy, Obamacare designers said.

Lobbyists have less power than 10 years ago, thanks to small donors and grassroots activists, so there’s probably less political risk to lawmakers excluding them from crafting the Green New Deal’s major planks, said Andy Slavitt, who was Obama’s administrator of the Centers for Medicare and Medicaid Services.

Rather than sideline industry completely, he suggested Green New Deal backers engage industry on technical matters that affect implementation, while resisting pressure to reshape the package around industry preferences.

"You do end up needing the people who are affected to be part of the implementation process," Slavitt said. "Even once you’ve made up your mind from a policy standpoint, you have to listen to what practical implementation issues there are."

That included rural hospitals for the ACA, he said, and it might include rural energy issues for the Green New Deal, given the Senate’s rural tilt.

One early challenge for the Obama administration was dealing with the false claim that its health care plan would lead to "death panels."

While untrue, the assertion by former Alaska Gov. Sarah Palin (R) tapped into widespread fears about further government involvement in medicine, and the term was heavily used on the cable news circuit.

"Once something [negative] catches on, it’s very hard to play catch-up and get it to go away," she said.

That was true of both death panels and the nickname Obamacare, and Schechner said it’s starting to happen with the Green New Deal. Opponents have falsely claimed the proposal would outlaw things like hamburgers (E&E Daily, Feb. 28).

Schechner said there are two steps Green New Deal proponents could use to take control of the narrative.

One is finding out "who in the climate debate people trust the most" and putting them out front, she said. Doctors and nurses fit the bill during the health care fight, but Schechner warned it could be harder for Green New Deal activists to find the right people because average voters "don’t have a personal climate scientist."

Her other suggestion? Use humor.

It can disarm opponents and engage folks who are otherwise apathetic. As one example, she said health care reform supporters ran a commercial that showcased an actor who cheated at tennis, golf and poker but claimed it was all OK because of "insurance company rules."

Build a coalition, but expect to lose allies

Schechner said it was important to build a large network of like-minded organizations and get them to rally around a shared set of ideals.

In the case of Health Care for America Now, those partners included a who’s who of left-leaning powerhouses, from AFL-CIO to NAACP to Planned Parenthood.

Sometimes an organization might step out on its own — such as Planned Parenthood dealing with reproductive rights during the health care debate — but a broad alliance is useful in putting pressure on lawmakers, Schechner added.

Supporters of the Green New Deal, led by an environmental group called the Sunrise Movement, already have taken a few pages from that playbook.

The group has marshaled a coalition of supporters that includes environmental organizations such as the Sierra Club and League of Conservation Voters.

But the alliance is far from comprehensive, and there are signs of disunity on the left.

Most prominent was a letter sent this month by members of the AFL-CIO energy committee. It criticized the Green New Deal as "far too short on specific solutions."

"It is not rooted in an engineering-based approach and makes promises that are not achievable or realistic," wrote Cecil Roberts, head of the United Mine Workers of America, and Lonnie Stephenson, president of the International Brotherhood of Electrical Workers (Greenwire, March 12).

In a series of Twitter posts, the Sunrise Movement downplayed the letter’s importance but acknowledged that more work was needed to bring labor on board.

"There are serious disagreements to be debated & bridges to be built, but we will not be deterred. Working people’s support for the Green New Deal will only grow as we continue building alliances and developing detailed policy at the local and national level," one tweet said.

And another: "Solidarity is a verb and we will continue to show up for our brothers and sisters in labor. Let’s get this done."

After Congress passed the ACA, its reputation suffered during the yearslong wait for real benefits. It’s a vacuum that some of ACA’s designers regret.

Historically, lawmakers have made policies durable through bipartisan buy-in; regardless of which party held power, the majority would include members with an interest in preserving their own program. The ACA fight proved that model outdated.

Now, durability most reliably comes from giving people benefits — and the more obvious the benefits, the more durable the policy, Obamacare backers said.

"Once you’re giving people benefits, then they have loss aversion," said Topher Spiro, who helped draft the ACA as deputy staff director for the Senate Health, Education, Labor and Pensions Committee.

The Green New Deal includes several far-reaching pillars that might take time to get working, like a jobs guarantee or 100 percent renewable energy generation.

Quickly getting those checks into people’s hands could make it harder for opposition lawmakers to dislodge the program, Spiro said.

"Make it tangible and visible almost immediately," said Spiro, who now works as vice president of health care policy at the Center for American Progress.

Democrats had planned to polish their health care bill until the final roll calls, but then-Sen. Scott Brown’s (R-Mass.) 2010 special election deprived them of their 60th vote, essentially freezing the bill. Democrats would never be able to finish ironing out some provisions of the 900-page bill, formed by combining two committee proposals.

Four words accidentally included in the bill — "established by the state" — underpinned a Supreme Court case that nearly ended the law, according to The New York Times.

It’s not unusual for big bills to have a few kinks. But in this atmosphere, congressional opponents are more likely to leverage those problems as a political weapon rather than just fix them, Obamacare veterans said.

"It was one-and-done because Republicans weren’t going to do anything," Slavitt said. "Even really simple things like the family glitch and other things that were no-brainers to fix, Republicans decided they were going to exploit or make it fail instead of saying, ‘Let’s fix these basic things.’"

The Green New Deal might benefit from building in a way to fix those kinds of hiccups without going back to Congress, he said.

But there’s a trade-off. Such measures can delay programs by years with ramp-up periods and pilot programs, giving opponents extra opportunities to end them before they begin.

Or as Slavitt put it, "There’s another school of thought that says, ‘Given what the political realities are, you just gotta freaking do it.’"