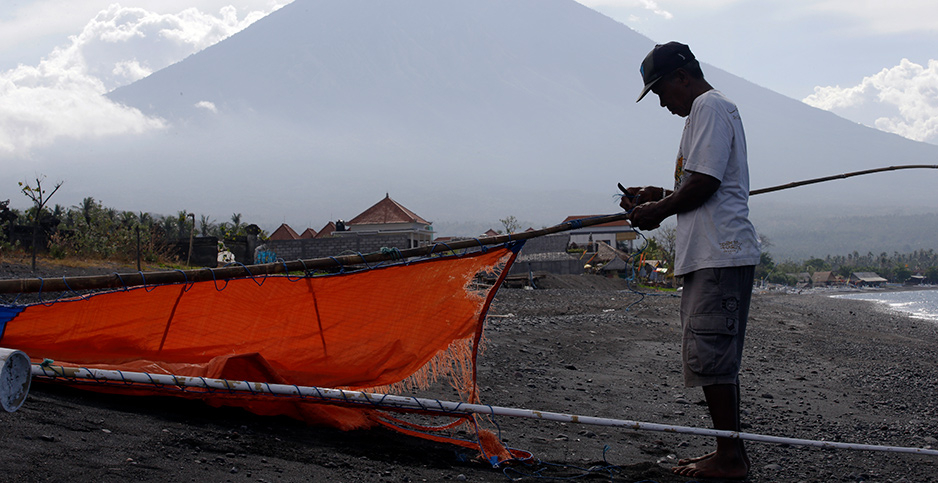 A fisherman repairing his sail, with Mount Agung in the background, in Bali, Indonesia, yesterday. About 150,000 people have fled from the Mount Agung area since authorities raised the volcano's alert status to the highest level on Sept. 22 after a sudden increase in tremors. It last erupted in 1963, killing more than 1,000 people. Firdia Lisnawati/Associated Press

The relationship between volcanoes and their effect on climate change has long been debated, but the two have some close links.

Two volcanoes threatening to erupt have prompted the evacuation of more than 160,000 people. In Bali, Indonesia, about 150,000 residents have fled from the vicinity of Mount Agung, which killed more than 1,000 people when it last exploded 50 years ago. And in the Pacific nation of Vanuatu, everyone on the island of Ambae was evacuated after a volcano spit lava, ash and fire from its mouth in recent weeks. Evacuees numbered more than 11,000 people.

There are many myths about volcanoes and rising temperatures. One of the most persistent is a false claim that the ash disgorged by erupting mountains is the primary driver of current climate change. That said, there is a relationship between volcanoes and the changing environment. Evidence exists that rapid climate change has led to volcanic eruptions in the past and, conversely, that past eruptions have driven climate change.

In the Earth’s history, there are plenty of links between climate change and volcanoes

Of course, human activity is not affecting the eruption of these volcanoes, which are located in the "Ring of Fire" region of the Pacific. Volcanoes are more numerous there because of plate tectonics. Still, rapid climate change has been linked to volcanic activity in some areas of the globe. A study published in September in the Proceedings of the National Academy of Sciences found that glacial retreat in Antarctica 17,700 years ago was connected to a series of volcanic eruptions over a 200-year period.

Here’s how that happens. Ice and ocean water create pressure on the Earth’s crust, capable of containing magma. If a glacier retreats in a relatively quick period of time, the magma is more likely to push toward the Earth’s surface, said Michael Manga, a professor of earth and planetary science at the University of California, Berkeley.

"After big glaciers melt, we see more volcanoes erupt, so not only do volcanoes affect climate, but climate also affects volcanism," he said.

When a volcano erupts, it spews ash and aerosol droplets into the atmosphere. These are capable of cooling the planet, though typically it lasts a few days or weeks before they are removed from the atmosphere, according to the U.S. Geological Survey. The airborne particles reflect more sunlight, which otherwise would warm Earth. Also emitted is sulfur dioxide gas, which can cause cooling. As the sulfur dioxide is converted into sulfuric acid, it creates aerosol droplets, which further reflect the sun’s rays away from Earth and contribute to cooling.

For major eruptions, such as that of Mount Pinatubo in 1991, the cooling effects can last for years. That eruption lowered global temperatures for three years, by as much as 1.5 degrees Fahrenheit at its peak.

No, volcanic eruptions will not save us from human-caused global warming. Their cooling effect is temporary. And as they cool the Earth, they belch out significant amounts of greenhouse gases.

Past volcanic eruptions of a scale not seen in modern human history have caused dramatic changes to the planet and caused extinctions, said Manga, of Berkeley. They shifted the planet’s temperatures a few degrees and even as much as 7 or 8 degrees regionally. That’s roughly equivalent to the "difference in Canada and Miami," he said. Ancient super-eruptions have affected modern humans. For instance, researchers have examined an eruption that occurred 37,000 years ago that caused changes near Naples, Italy. It might have helped kill off Neanderthals.

Still, volcanoes cause temporary changes that are eventually brought into balance by the atmosphere.

"It’s something you recover from, and I guess that’s the difference with human-induced changes in the climate," Manga said. "We’re changing our climate because we’re changing the amount of carbon dioxide, and that’s not something that recovers on short time scales, whereas the cooling effects of volcanoes, it’s sulfur dioxide that gets into the stratosphere, and it rains out eventually over time, so those effects dissipate very quickly."

The effects of volcanoes need to be accounted for in future climate change predictions, according to a study published in August in Nature Climate Change. As researchers make future predictions from climate models, they need to factor in major eruptions over the next century, said Ed Hawkins, a climatologist at the University of Reading. To accurately forecast how climate change will transform the planet, researchers must account for temporary periods of cooling that come from volcanoes, according to Hawkins.

"Including some eruptions makes the changes in global temperature more variable, but as the effects of eruptions are only temporary they will not counteract the warming from greenhouse gases over the next century," he wrote in an email.

Hawkins and his colleagues have been careful to point out in their research that volcanic eruptions will not counteract climate change.

Those who deny the long-established science that humans are the primary driver of climate change have long turned to volcanoes to bolster their argument, inflating the contribution of volcanoes while downplaying fossil fuel emissions. Skeptics have incorrectly claimed that volcanoes drive carbon emissions and potentially contribute more than human activity.