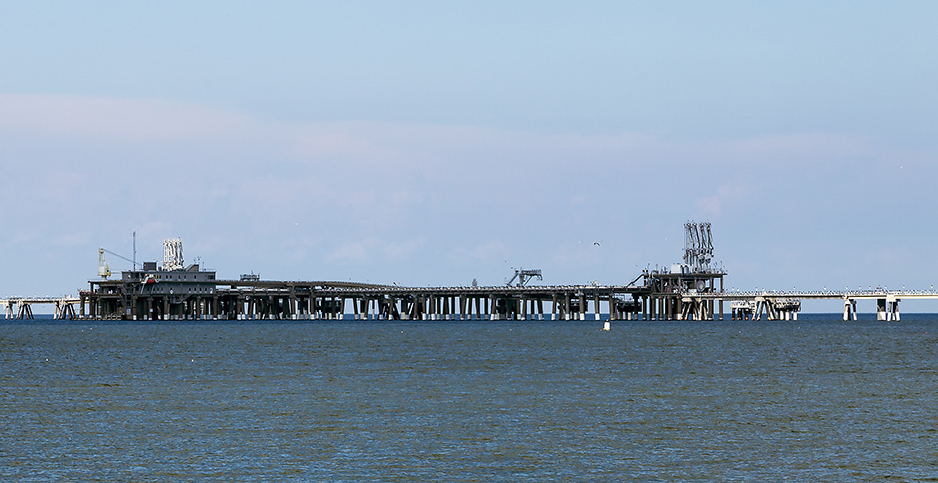 The United States is rapidly increasing its exports of liquefied natural gas. But it isn’t the only nation doing so or that has plans to do so.

The addition of the Cove Point LNG plant in Maryland brings the number of major LNG export centers in the U.S. outside Alaska to two. Sabine Pass in Louisiana became the first LNG export platform to emerge from the shale gas revolution, and it is expanding still. By the end of this year, another train at Sabine Pass is expected to be in commercial operation.

From now until next year, the U.S. Energy Information Administration expects four more LNG export projects to come online across the country, from Corpus Christi and Freeport in Texas to Cameron, La., and Elba Island, Ga.

By 2021, baseload U.S. LNG export capacity will exceed 9 billion cubic feet of gas per day (Bcf/d), according to EIA’s figures. The rise of U.S. LNG is upending the way the commodity is marketed and sold globally (Energywire, Feb. 14).

But these projects have plenty of competition around the world.

"Besides Australia and the United States, several other countries also increased LNG exports in 2017," EIA analysts point out in a recent report. "The return to service of Angola LNG and increases from several countries including Nigeria, Malaysia, Algeria, Russia, and Brunei added another 1.4 Bcf/d of LNG exports, more than offsetting a combined decline of 0.6 Bcf/d in exports from Qatar, Indonesia, Norway, Peru, the United Arab Emirates, and Trinidad."

LNG is gaining popularity in East Asia, the region with the fastest economic growth. India and Pakistan have also been expanding their LNG consumption. Supply is now racing to catch up with demand from all corners of the globe. New projects in Australia, Papua New Guinea and Russia have all recently entered the market, and more are coming.

"A wave of new projects in Mozambique, Qatar, Russia, and the United States are expected to pass FID [final investment decisions] over the 2018-2019 period," notes the Westwood Global Energy Group.

The rush means the world is expected to be in an LNG oversupply situation until the mid-2020s, although rising Asian demand and European consumption should cut back on the oversupply by 2025 or so, Westwood says.

Until then, U.S. LNG will be entering an increasingly crowded marketplace.

Long the globe’s main supplier of LNG, the Middle Eastern nation of Qatar is poised to host the 2022 World Cup soccer tournament. And Qatar could be at the cusp of greatly expanding its LNG export capacity over the coming years to reclaim the title of world’s largest exporter from Australia.

"In April 2017, Qatar lifted the North Field natural gas production moratorium that had been in place since 2005," noted Rystad Energy analysts. "This will allow Qatargas to increase production from the world’s largest gas field and export more LNG volumes."

If Qatar follows through on all of its ambitions, LNG market watchers think it’s possible that the nation could boost its export capacity by 30 percent, to some 100 million metric tons per year (mtpa). These volumes will be ideally situated to meet the needs of rising LNG consumers in East and South Asia, namely China, India and Pakistan.

And because of the scale of Qatar’s gas reserves and existing infrastructure, Rystad estimates that Qatar’s LNG could be marketed to customers at around 34 percent below a break-even price for a U.S. LNG project, which could threaten some other U.S. LNG export proposals. "The expansion comes at a time when there are several liquefaction trains in the U.S. ready to take FID," they said. "The Qatari project represents a challenge for these projects as it is estimated that it has the lowest breakeven price of all the planned projects in the world."

Research firm GlobalData PLC argues that Qatar actually faces potential production declines if the nation doesn’t invest in more export capacity. Qatar reaps the vast majority of its government revenues from gas and LNG exports, giving the nation a great incentive to follow through with its vision. By 2025, Qatar’s daily LNG export capacity may be double that of the U.S., according to GlobalData’s figures.

"The availability of resources, capital and determination to maintain its energy independence and global LNG stronghold despite the political regional dispute seems to be spurring Qatar’s natural gas investment and places the country in a strong position to achieve its mid to long-term ambition to achieve an LNG export capacity of 100 mtpa," researchers there said.

Long before U.S. LNG entered the stage, Australia was leading the world in the growth of additional natural gas liquefaction and LNG export capacity. But the world’s largest oil and gas majors shot themselves in the foot by all rushing in to build their massive projects at the same time. The resulting spikes in labor and materials costs saw huge budget overruns, angering investors (Energywire, April 14, 2014).

The experience led some in the industry to call for better coordination of construction timing to avoid a repeat. That didn’t happen as U.S. LNG projects went up.

Still, Australia is today a leading exporter of LNG, with the bulk of its sales going to Japan. From 2017, LNG exports from Down Under expanded by more than 18 percent. This came on top of earlier growth due to the addition of new export trains at Gladstone, Gorgon and Wheatstone.

Graeme Bethune, chief of the Australian market research firm EnergyQuest, said in a note to clients that Australia’s export growth was driven by rising Chinese demand, a fact that could put Australian LNG in a favorable position should the trade spat between the U.S. and China end up blocking U.S. LNG sales to the Middle Kingdom.

"The growth in exports was driven by increased deliveries to China of 6.5 mt, particularly from Gladstone but also from west coast projects," Bethune said.

But Australia’s LNG export prowess could be close to peaking, although the picture is somewhat murky, said Carlos Torres-Diaz, a natural gas and renewables market analyst at Rystad. "At the moment, we don’t see any new Australian projects that are likely to go ahead, but lately there has also been some discussions between the different producers in the west coast to build a joint plant, which would make a new project more feasible," he said.

Seven years ago, oil and gas industry insiders speculated that Canada could beat the U.S. in the race to build the first shale-gas-driven LNG export project in North America (E&E News PM, Oct. 31, 2011).

Those earlier predictions have since proved wildly off-base as U.S. industry builds one LNG export platform after another, while Canada hasn’t added any new projects since shale gas burst onto the scene.

But after years of delays and false starts, things may finally be moving forward in British Columbia, where a consortium hopes to connect massive shale gas fields to an LNG export facility proposed for the Pacific coast community of Kitimat.

A planned 2016 FID was canceled and no new date has been set, but LNG Canada has been busy securing permits and shopping for potential customers anyway, steps that will allow partners Royal Dutch Shell PLC, PetroChina Co. Ltd., Mitsubishi Corp. and Korea Gas Corp. to finally break ground on the proposed project. The plan envisions two trains exporting some 6.5 mtpa at the outset, with an option to expand the Kitimat facility by four additional trains.

The consortium made no public announcements last year. Then, LNG Canada surprised many by announcing back in April that it had located contractors to run engineering and construction for the project, signing a deal with Fluor Corp. and JGC Corp. of Japan.

U.S. LNG export capacity is concentrating on the East Coast and Gulf of Mexico coastline, while LNG Canada envisions a Pacific LNG port, potentially giving that project an advantage over its U.S. competitors for the major East Asian demand growth areas.

And though environmental groups are mounting stiff opposition to new fossil fuel projects in Canada, especially in British Columbia, Ottawa is fully supportive as the shale gas boom in the U.S. has cratered demand and prices for Canada’s natural gas. Diversifying the export market for Canada’s energy is a top concern of the federal government.

New LNG exports from Nigeria and Mozambique may also compete for U.S. exporters’ market share in years to come.

A West Africa LNG veteran, Nigeria LNG recently contracted with a consortium to build a seventh LNG export train, with plans to expand the existing Bonny Island LNG platform by more than 36 percent, according to McKinsey Energy Insights. The $12 billion proposed project "will increase the plant’s capacity from 22 mtpa to 30 mtpa," analysts said in an overview.

Although Anadarko is on the record saying that its gas discoveries in Mozambique could lead that nation to become the world’s third largest exporter, more than six years have passed and no LNG has shipped from the proposed site since then, and the developers have offered no clear project timeline on the project’s website (Energywire, May 24, 2012).

But that could change soon.

Partner Mitsui & Co. is closing in on a final investment decision on Mozambique LNG, with an announcement on the FID likely by March 2019, according to Reuters. Mitsui told the news agency that it had secured commitments for buyers that will cover 9 mtpa of the 12 mtpa capacity envisioned, to be completed and in operation by 2023.

And in June, Anadarko announced that it had reached an off-taking agreement with Tokyo Gas Co. Ltd. and Centrica LNG, a deal that calls for 2.6 mtpa in shipments from Mozambique LNG beginning from startup until the 2040s. Its location in the Indian Ocean would make it ideally suited to supply India with a steady stream of gas.

"Tokyo Gas and Centrica have a strong global reputation in the industry, and we are delighted they have made this commitment to the Mozambique LNG project," Anadarko Vice President Mitch Ingram said in a statement. "This off-take arrangement takes full advantage of Mozambique’s favorable central location, which enables Mozambique LNG to supply customers in both the European and Asian-Pacific markets."

The launch last year of shipments for Russia’s groundbreaking Arctic project, Yamal LNG, showed that the previous world record gas producer wasn’t content with relying on expanding pipeline shipments to Europe as it explores other opportunities.

Yamal LNG arrived onto the scene in spite of U.S. government sanctions on Russia’s oil and gas business, and Russian LNG from that project even made it to customers in Boston earlier this year, sparking heated controversy (Energywire, March 21).

Russia joined the LNG fray for the first time in 2009 with Sakhalin-II. That project captures natural gas from an offshore field in Russia’s Far East, where it is liquefied and delivered to customers mainly in Japan and South Korea.

Investors are aiming to follow up on the success of Sakhalin-II and Yamal LNG.

Novatek wants to capitalize on its Yamal experience as it designs and plans construction of Arctic LNG-2, proposed for the northwest Siberian coast. The plan is for a total liquefaction and export capacity of 18 mtpa, according to the consultancy PricewaterhouseCoopers.

The two oil and gas giants are reportedly pushing to finalize an FID by next year, according to Reuters. Far East LNG would also be located on the Sakhalin island north of Japan.