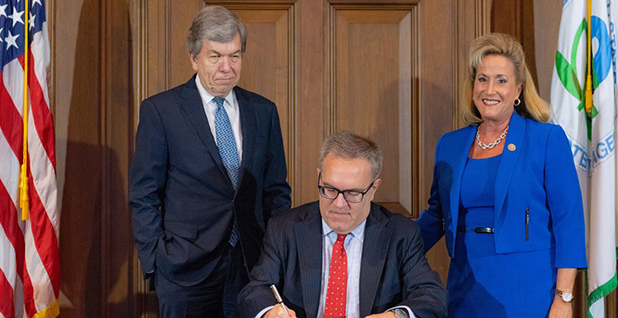 President Trump suggested yesterday he will nominate his acting EPA chief to keep the job.

In his remarks at the White House, Trump said acting Administrator Andrew Wheeler was "doing well" at the agency.

Wheeler, who took over from Scott Pruitt after the former administrator resigned in July under a crush of ethics allegations, has been welcomed by Republicans and EPA staff who believe he is an improvement over his predecessor, whom they had little interaction with.

If he is nominated, however, Wheeler’s confirmation won’t be easy. The battle to confirm him as EPA’s deputy chief took more than six months and ended on a mostly party-line vote, with only three Democrats voting in support of Wheeler.

Environmental groups would again gear up for a fight over Wheeler and push their Democratic allies to oppose him. Soon after Trump’s comments yesterday, the Sierra Club blasted out to reporters criticism of Wheeler, calling him a "public health threat."

"Wheeler has no business being confirmed to a full-time role at EPA, and any senator who supports him has made clear they are prioritizing polluter profits over the public," Michael Brune, the group’s executive director, said in a statement.

If nominated for the top EPA job, Wheeler would likely have a much tougher confirmation hearing too. At his hearing for the deputy position, he appeared alongside Kathleen Hartnett White, Trump’s failed nominee to lead the White House Council on Environmental Quality, who attracted more scrutiny from senators.

Still, as long as Republicans keep the Senate after the upcoming midterm elections, Wheeler is expected to be confirmed. Things could get more complicated if Democrats win the Senate, although that looks unlikely.

"He’s done a remarkable job of calming the waters at EPA," said Matt Dempsey, who worked with Wheeler on the Senate Environment and Public Works Committee.

"I think he’s gotten strong praise from members of both sides of the aisle to date," Dempsey added. "Any time you’ve got a nominee up before the U.S. Senate at this current time, it’s going to be contentious, of course."

Democrats will push back on a Trump EPA nominee.

"They’re going to drag him, through, they’ve all got to take their shots at him for their favorite stuff," said Stephen Brown, an energy consultant at RBJ Strategies and a former House Democratic staffer. "I don’t see anything fatal. I see a long day of hearings for the guy."

Even if Democrats take the Senate, "Could he get through that? Of all the guys that they would put in there, I don’t know who else they would rather deal with than Andy," Brown said.

Under the Vacancies Act, Wheeler can serve as acting EPA chief for 210 days, which would end in February next year, although some exceptions could extend his service at the top of the agency. If Wheeler is nominated for the administrator job, he could not serve in the position on an acting basis.

Here are some of the issues Wheeler’s critics are likely to push during a potential confirmation hearing:

Wheeler’s opponents focused on his work as a lobbyist for energy interests during his confirmation fight to be EPA’s second in command. His lobbying record would again be mined if he were nominated for the top job.

Wheeler’s lobbying on behalf of coal giant Murray Energy Corp. was a frequent point of attack, something the acting administrator joked about during his first address to EPA employees. The company’s CEO, Bob Murray, is considered close to Trump and was a vocal critic of EPA under the Obama administration.

Wheeler has sought to distance himself from his lobbying while at EPA, but records shown he has met with former clients. EPA officials have said those meetings were in line with his ethics commitments, given his past work for those specific clients was more than two years ago or those meetings were in group settings (Greenwire, Sept. 12).

Wheeler’s use of social media has come under fire since he took over as acting chief and could be fodder at a confirmation hearing.

He has engaged with questionable posts on Twitter and Facebook, including "liking" a racist anti-Obama meme in 2013.

Wheeler has said he doesn’t remember liking the post and he finds it offensive. Sen. Jeff Merkley (D-Ore.), who sits on the Environment and Public Works Committee that would oversee a Wheeler nomination for the top EPA job, has called for his resignation over the incident (Greenwire, Oct. 11).

Pruitt ran into trouble with Republican lawmakers over biofuels, and those woes could burden Wheeler, as well.

Several farm-state Republicans sit on the EPW panel and last year held up the nomination of EPA air chief Bill Wehrum due to their concerns over Pruitt giving waivers to oil refiners from the renewable fuel standard. They became some of Pruitt’s most prominent critics as his ethics problems mounted.

"Joni Ernst will have a real good shot at him on EPW on the E15 thing," Brown said. Ernst, an Iowa Republican, is a member of the EPW committee.

Wheeler said last week that he believes EPA can allow year-round sales of the 15 percent ethanol fuel, or E15, without congressional action. But that could put him in a bind with oil and gas companies.

"I hope that the oil industry will join us in helping to make the RFS program function better for the American public instead of taking it to court," Wheeler said (Greenwire, Oct. 19).

Wheeler also has faced a number of questions over EPA’s actions on children’s health during his tenure so far.

Ruth Etzel, the head of the agency’s children’s health office, was placed on administrative leave last month. EPA has said that was because of allegations related to her management, but she contends the Trump administration moved her out over disagreements over the Federal Lead Strategy that was due in June but has yet to be released.

EPA press officials have pushed back hard, saying children’s health and combating lead remain top priorities for the agency. Nevertheless, Democratic lawmakers have questioned Wheeler over his commitment on the issue.

Allegations of Pruitt’s heavy spending and mismanagement still linger at EPA and could get another airing at a possible Wheeler confirmation hearing.

The EPA inspector general is continuing to review Pruitt’s actions at EPA, including his travel and use of special hiring authority at the agency. Those reports are expected to be released this fall.

Wheeler, however, could create a contrast with Pruitt, considering his running of the agency has taken a different tack. He has shunned a 24/7 security detail and has opened up events to the press, taking questions from reporters. Wheeler even reopened a door to the hallway leading to the administrator’s office, which was noticed by career employees.

"Given his work so far and the respect he’s earned from the folks I’ve talked to, I think he’s got strong support if that’s the decision that Trump makes."